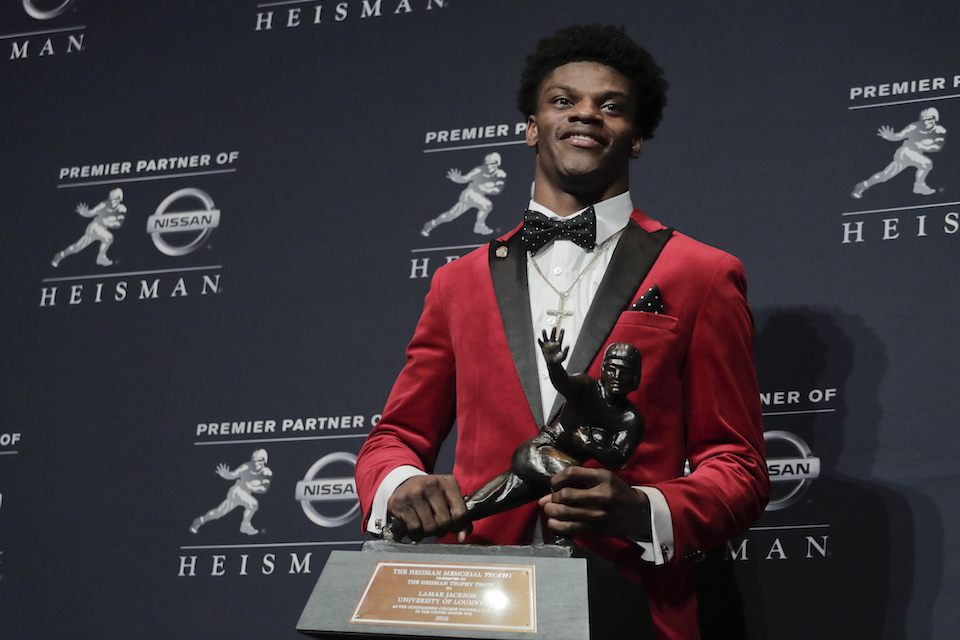 NEW YORK (AP) — Lamar Jackson was trying to remember the last time he cried. He was pretty sure it involved losing a little league football game.

On Saturday night, Louisville's spectacular sophomore quarterback found out winning can get a guy choked up, too.Jackson became the first Louisville player to win the Heisman Trophy, beating out preseason favorite Deshaun Watson of Clemson despite some late-season struggles.

Jackson, wearing a red velvet blazer with shiny black lapels and a black bow tie, said he could feel his heart pounding in his chest right before his name was announced. He barely held it together while giving his acceptance speech, with the former Heisman winners standing behind him on stage.

"I almost cried," Jackson said. "I never get emotional, but to have my name called and see all those great players ..."

Early in the season, Jackson leapt over a loaded field of Heisman contenders that included five of the top seven vote-getters from 2015 to become the front-runner. By the time he slowed down nobody could catch him.

Jackson accounted for 51 touchdowns and averaged 410 yards per game in total offense in his first season as Louisville's full-time starter.

"He surpassed everything I thought he could do," Louisville coach Bobby Petrino said.

Jackson ultimately won the Heisman going away, with 2,144 points to Watson's 1,524. By percentage of possible points received, Jackson's victory was the seventh largest in Heisman history.

He also became the youngest winner at 19 years, 337 days, a few days younger than 2013 winner Jameis Winston of Florida State.

Jackson credited his mother, Felicia Jones, and said the trophy will go anywhere she decides to put it. Jones raised Jackson as a single mom and would put on football pads to help her son work on his game when he was a kid.

"Everything I do is for my mother," Jackson said.

Jackson is the first Heisman winner to play on a team that lost its last two games of the regular season since Tim Brown of Notre Dame in 1987. He's the first to enter the postseason without a chance to win the national title since Johnny Manziel of Texas A&M in 2012.

No matter. Jackson did so much before November it was difficult to deny him the award because of a couple of missteps at the end .

He provided a signature moment against Syracuse , hurdling a defender on his way into the end zone, and then played his best against Louisville's toughest competition.

In a romp over Florida State and a close loss at Clemson , Jackson threw for 511 yards, ran for 308 and accounted for eight touchdowns. After ripping apart Florida State in September, he earned the stamp of approval from his idol, former Virginia Tech and NFL star Mike Vick.

"Each and every game should be a Heisman moment," Jackson said.

Jackson left that Oct. 1 game in Death Valley as a threat to run away with the Heisman, but losses to Houston and Kentucky, when he committed four turnovers, in late November provided an opportunity for others to sway voters.

Watson made the biggest surge, but fell way short.

Jackson came to Louisville as a three-star recruit from Boynton Beach High School in Florida. Some colleges were not sold on him as a quarterback, but Jackson was such a dynamic talent that Petrino altered his offense to accommodate Jackson's speed and elusiveness.

Jackson flashed brilliance as a freshman, but with so many well-established stars from Watson and Mayfield to running backs Christian McCaffrey of Stanford, Dalvin Cook of Florida State and Leonard Fournette of LSU, he entered this season with little fanfare.

Just the way he likes it.

Jackson spent the season adjusting to newfound fame, growing into the role of face of the team and trying to stay out of the spotlight. He said he cut down on trips to the mall to avoid the inevitable crowds he drew.

He is about to become even more popular. Especially, back in Louisville, where he has another year before he can even consider his next big jump — to the NFL. Louisville athletic director Tom Jurich said he liked the idea of building a statue of Jackson in front of Papa John's Cardinal Stadium.

"I don't care where you put it man," Jackson said with a laugh. "It's an honor just to have a statue."