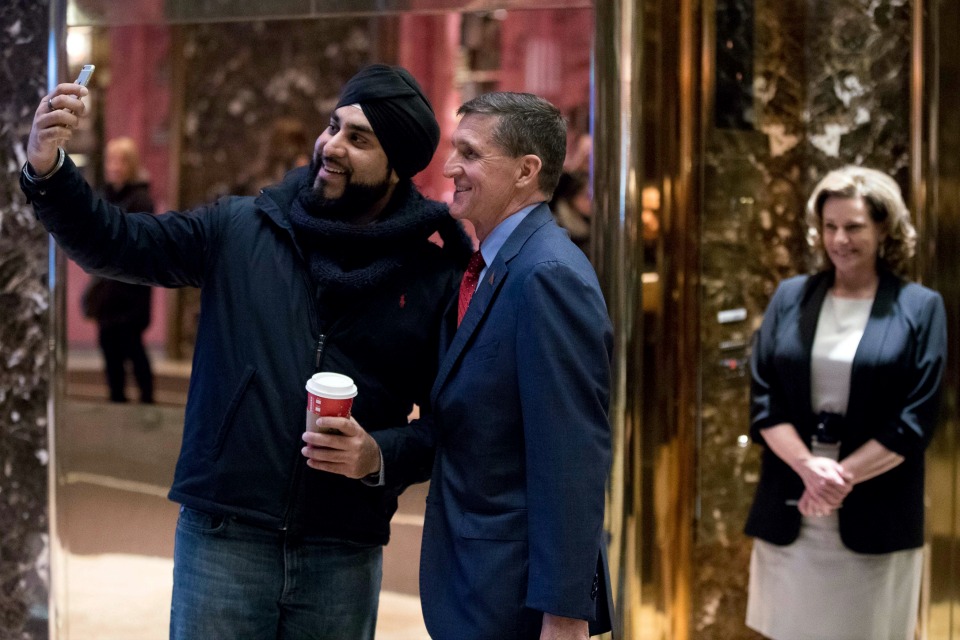 WASHINGTON (AP) — On issues of national security and intelligence, no one is likely to have more influence in Donald Trump's White House than retired Gen. Michael T. Flynn.

Yet Flynn, Trump's incoming national security adviser, has gained prominence in Republican politics by fueling conspiracy theories and Islamophobic rhetoric that critics warn could create serious distractions — or alienate allies and embolden enemies — if it continues.

"His job is to ensure that the White House is focused at all times on all of the threats that the United States faces abroad," said Julianne Smith, a former deputy national security adviser to Vice President Joe Biden. She said she was "deeply troubled" by a Flynn tendency to promote fake news stories on his Twitter feed.

"You don't want to have a distracted national security adviser," said Smith, who now directs the strategy and statecraft program at the Center for a New American Security.

She was among several national security experts who raised concerns Tuesday about Flynn's willingness to share bad intelligence on a social media feed as he prepares to move to the West Wing.

Flynn served until 2014 as the head of U.S. military intelligence. Although he left that job over disputes with the Obama administration over policy and his management of the Defense Intelligence Agency, he is widely regarded as a top intelligence officer, a job that requires an understanding of the power of disinformation.

The issue of sharing fake news was highlighted when Flynn's son, Michael G. Flynn, tweeted about the false idea that prompted a shooting at a Washington, D.C., pizza parlor. He had been promoting a conspiracy theory that Hillary Clinton's allies had been operating a secret pedophilia ring in the restaurant and noted it would remain a story until "proven to be false."

Vice President-elect Mike Pence acknowledged Tuesday that the younger Flynn was helping his father with scheduling and administrative items during the presidential transition but told CNN "that's no longer the case."

Asked repeatedly whether a security clearance was requested, Pence refused to answer directly. "Whatever the appropriate paperwork was to assist him in that regard, Jake, I'm sure was taking place," he said.

Trump's team did not clarify whether Michael Flynn Jr.'s departure from Trump's transition team was related to the tweets.

Less than a week before the election, the elder Flynn tweeted a link to a story that falsely claimed Clinton emails contained proof of money laundering and sex crimes with children, among other illegal activities. The incoming national security adviser called the baseless story a "must read" and instructed his followers: "U decide."

Flynn also promoted conspiracy theorists, some of them white supremacists, throughout the campaign even as he emerged as Trump's highest profile national security adviser.

He encouraged his followers to read a book by Mike Cernovich, whose website has suggested Clinton's campaign chairman was part of a "sex cult with connections to human trafficking." Flynn also tagged white nationalist Jared Wyand, whose website is popular with "alt-right" followers.

Flynn's appointment is not subject to Senate confirmation.

Rep. Adam Schiff, the top Democrat on the House intelligence committee, said Tuesday that Flynn's willingness to promote fake news "raises profound questions about his suitability for this important position."

Trump's team did not respond to questions about Flynn's social media activity. Pence praised Flynn more broadly on Tuesday, even as he distanced the incoming administration from Flynn's son.

"We are so grateful and honored to have Gen. Flynn as our nominee for national security adviser. He brings an extraordinary wealth of experience," Pence said.

The role of national security adviser has varied by administration, but usually centers on coordinating the policy positions of the secretaries of state and defense, the attorney general and other members of a president's team.

It is an especially important position because of the national security adviser's access to the president in the West Wing of the White House. Flynn's office will be steps away from the Oval Office, proximity that allows him to act as a gatekeeper on a wide range of issues, including matters of war and peace as well as diplomacy and intelligence.

He is expected to have more direct access to the president than national security officials in the Cabinet. Aside from attending Trump's daily intelligence briefings and senior staff meetings, Flynn will also oversee the National Security Council, a White House department that has grown to about 400 people involved in making policy recommendations.

Flynn, who turns 58 in December, served for more than three decades in the Army.

Whoever has the president's ear on international affairs, Nichols said, should have "a firm grip on what's true and what's false."