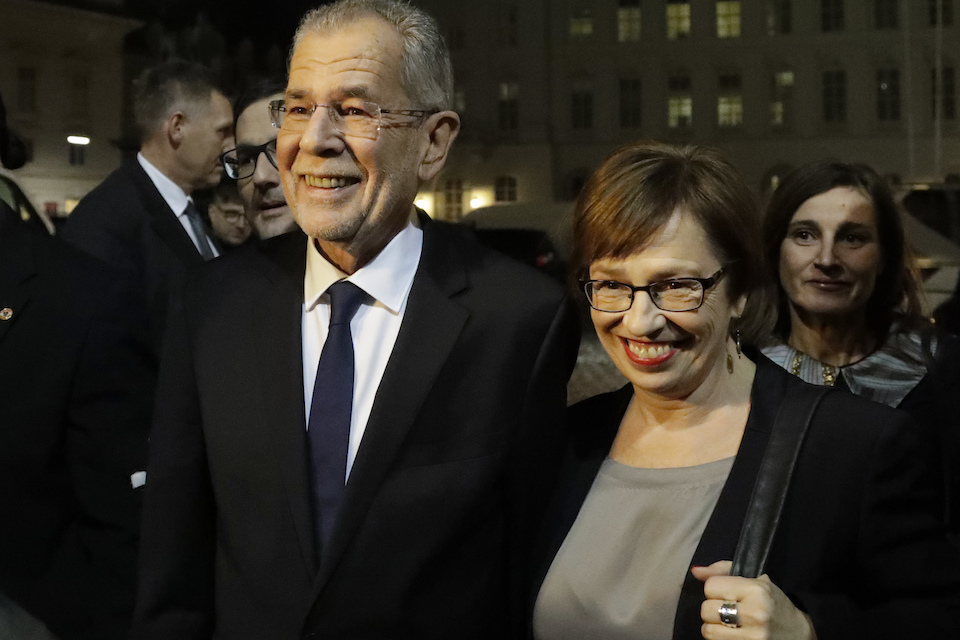 Austria's president has mostly symbolic duties. But with Sunday's election coming after Donald Trump's win in the United States and the Brexit vote in Britain, the vote was being watched across Europe as an indication of how well right-wing euroskeptic figures would do next year in elections in other EU nations.

The result was greeted with relief and congratulations by mainstream politicians in Austria and neighboring Germany.
Vice Chancellor Sigmar Gabriel, who heads Germany's center-left Social Democrats, told the Bild newspaper that "a load has been taken off the mind of all of Europe." He called the result "a clear victory for good sense against right-wing populism."

Austrian Chancellor Christian Kern said Van der Bellen "will represent Austria domestically and abroad in an excellent manner" — alluding to fears by establishment politicians in Austria that a victory by Hofer, whose anti-immigrant Freedom Party is critical of the European Union, would hurt Austria's image.

Right-wingers allied with Hofer, meanwhile, praised the losing candidate for a strong electoral fight despite his defeat.

With nearly all results counted, Van der Bellen had 53.3 percent of the vote to Hofer's 46.7 percent. While the margin may change slightly when final results are in, Austrian officials said the results gave Van der Bellen an unbeatable lead.

Noting the outsize attention the election in Austria was receiving, Van der Bellen declared that "what happens here today has relevance for all of Europe" as he cast his ballot.

As his victory became clear, Van der Bellen said it showed most voters backed his message of "freedom, equality, solidarity."

He said he would work to unite a country deeply split between the moderate liberals who voted for him and supporters of Hofer's anti-immigrant party.

Acknowledging that he was "endlessly sad," Hofer said. "I would have been happy to take care of our Austria." He urged voters of both camps to bury their differences and work together.

Final results will not be available until more than 500,000 absentee ballots are counted Monday.

Far-right National Front leader Marine Le Pen of France and anti-immigrant politician Geert Wilders in the Netherlands, who both face national elections next year, tweeted their support Sunday for Hofer as voting took place. After he lost, they congratulated him on his strong showing.

Manfred Weber, a conservative who heads the main center-right group in the European Parliament, wrote on Twitter: "Austrians send clear pro-European signal. The European right-wing populists' party is off for now."

Top German opposition Green leader Simone Peter called it "a good day for Austria and Europe. The right-wing rabble-rousers have to be stopped!"