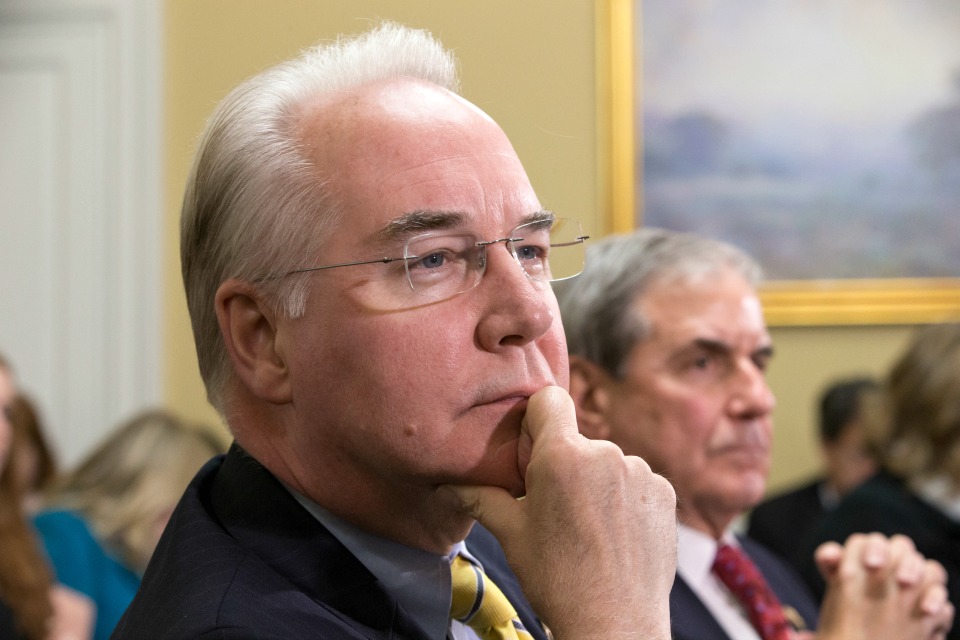 Both have long ties to Washington.

Price, picked to lead the Department of Health and Human Services after more than a decade in Congress, helped craft House Speaker Paul Ryan's plan to privatize Medicare — a position Trump opposed in the campaign. Chao, who was the first Asian-American woman to serve in a president's Cabinet, is married to Senate Majority Leader Mitch McConnell.

Trump announced his choice of Price, while the selection of Chao was confirmed by a person with knowledge of the decision but not authorized to speak publicly.

The selections came as Trump spent Tuesday with advisers in his Manhattan skyscraper, racing through meetings with prospective administration hires as high-profile vacancies loom — none bigger than secretary of State. Former Massachusetts Gov. Mitt Romney, on the shortlist for the nation's chief diplomat, was to have a private dinner with the incoming president.

Trump also met with former Vice President Dan Quayle, who is not a Cabinet candidate, among a half dozen visitors on the day.

Price's selection raised questions about the incoming president's commitment to Medicare, among other popular entitlement programs he repeatedly vowed to preserve before the election. The Georgia congressman led GOP efforts on Capitol Hill to transform Medicare into a voucher-like system, a change that if enacted, would likely dramatically reduce government spending on the health care program that serves an estimated 57 million people.

Trump did not address Price's position on Medicare in a statement released by his transition team. The team did not respond to subsequent questions about it.

"Chairman Price, a renowned physician, has earned a reputation for being a tireless problem solver and the go-to expert on health care policy, making him the ideal choice to serve in this capacity," Trump said. "He is exceptionally qualified to shepherd our commitment to repeal and replace Obamacare and bring affordable and accessible health care to every American."

Trump, in a 2015 interview promoted on his campaign website, pledged not to cut expensive entitlement programs that Republicans have fought for years to cut to help reduce the federal deficit.

He later changed his mind on Medicaid, embracing the GOP concept of turning the program over to the states with a fixed amount of federal "block grant" funding.

Like any Cabinet official, Price would carry out the wishes of the president. And a sweeping Medicare initiative would have to go through Congress with some Democratic support, which would be unlikely.

Rep. Rosa DeLauro, D-Conn., a leading Democratic voice on health care, called Price a leader of the movement to privatize Medicare. She said his selection "will result in the complete undermining of our nation's health care system."

Like Price, Chao is well-known in Washington, having led the Department of Labor for several years under President George W. Bush.

Her record at the Labor Department suggests she would bring a light hand to safety enforcement as transportation secretary. Under Chao at Labor, the Occupational Safety and Health Administration didn't issue a single significant new safety regulation for four years. Mine safety inspectors were cut and inspections reduced.

Whether it's integrating drones into the national airspace, deploying self-driving cars or "some other new technology, she's not going to be especially inclined to second guess the industry when they say that this will be safe," said Thomas McGarity, a University of Texas law professor and author of "Freedom to Harm," a book about the Labor Department that includes Chao's tenure.

The president-elect summoned Romney for dinner Tuesday night to discuss the secretary of state job for a second time. He also met with Tennessee Sen. Bob Corker, chairman of the Senate Foreign Relations Committee, having met with former CIA director David Petraeus the day before.

After his meeting, Corker told reporters, "The world needs to know that the secretary of state is someone who speaks fully for the president," a possible jab at Romney, who aggressively opposed Trump's candidacy.

Transition aides said Trump was likely at least a few days away from a decision.

Even as he weighed crucial Cabinet decisions, Trump appeared distracted by outside issues — or eager to create distractions himself. He tweeted that "nobody should be allowed to burn the American flag." He warned that those who do should face "perhaps loss of citizenship or year in jail!"

Trump offered no context for his message. The Supreme Court has ruled that flag burning is protected by the First Amendment, and Republican House Majority Leader Kevin McCarthy said Tuesday he doesn't support Trump's approach.

"I support the First Amendment," he said.

The president-elect spent the weekend tweeting his opposition to recount efforts in up to three states led by Green Party candidate Jill Stein and joined by Hillary Clinton's team. He also falsely claimed that millions of people had voted illegally in the presidential election and provided no evidence.

Trump's team also announced that Seema Verma has been chosen to be administrator of the Centers for Medicare and Medicaid Services.