Tens of Thousands Across USA Protest Election of Donald Trump 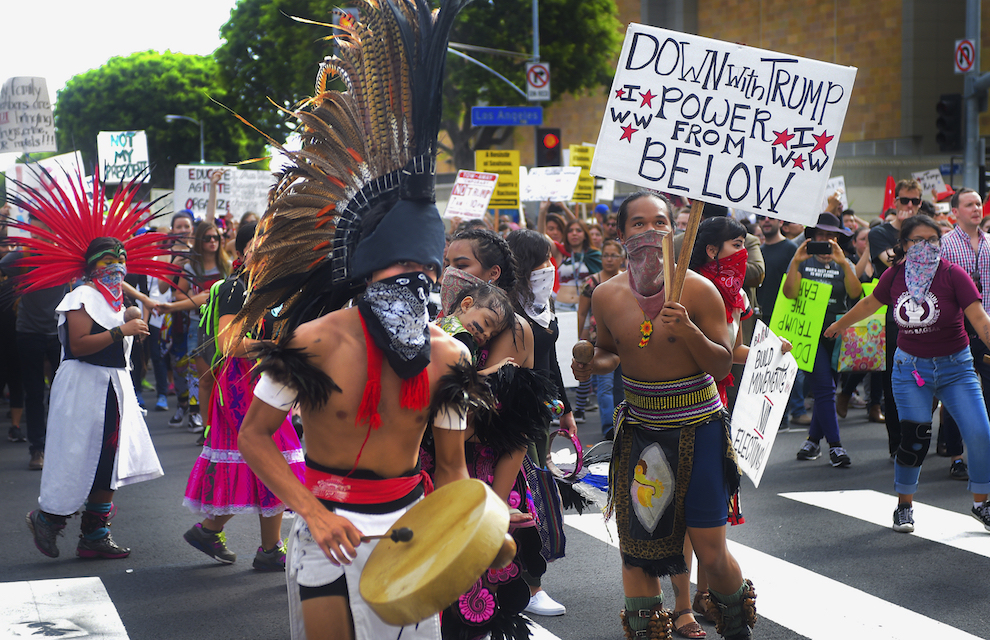 NEW YORK (AP) — Donald Trump's presidential upset win sparked a fourth day of protests across the United States, with tens of thousands of protesters marching and railing against him.

Saturday protests — held in big cities such as Los Angeles, New York and Chicago as well as smaller ones, such as Worcester, Massachusetts, and Iowa City, Iowa — were largely peaceful, although two police officers were slightly injured in protests in Indianapolis.

Demonstrators rallied at New York's Union Square before taking their cause up Fifth Avenue toward Trump Tower, where they were held back by police barricades.

The Republican president-elect was inside his tower apartment, working with aides on the transition to the White House.

Among those railing against him was filmmaker Michael Moore, who tweeted a demand that Trump "step aside."

"I just can't have Donald Trump running this country and teaching our children racism, sexism and bigotry," she said. "Out of his own mouth he made this division. He needs to go — there's no place for racism in society in America."

Trump's comments — particularly a 2005 recording of him making lewd comments about women — sparked outrage during his campaign. That spilled over into demonstrations following an election that ended with half of U.S. voters choosing the other candidate, Democrat Hillary Clinton. 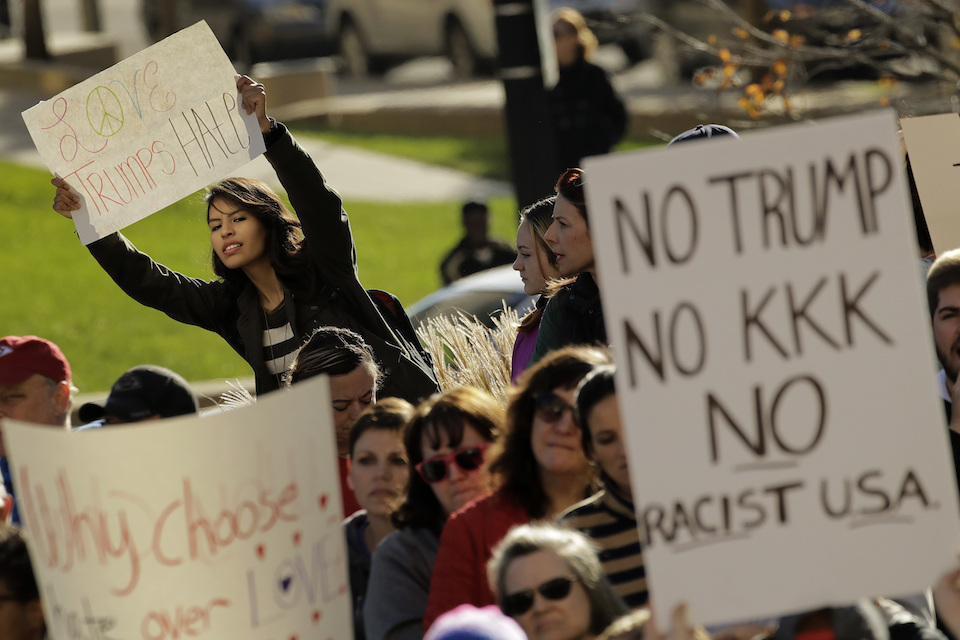 PHOTO: People protest against the election of President-elect Donald Trump Saturday, Nov. 12, 2016, in front of City Hall in Kansas City, Mo. Thousands took to the streets Saturday across the United States as demonstrations against Trump continued in New York, Chicago, Los Angeles and beyond. (AP Photo/Charlie Riedel)

Police briefly fired pepper balls into the crowd during the confrontation.

"We believe that we have some instigators that arrived in our city," trying to start a riot, Riggs said.

Rowdy demonstrators marched through downtown Portland, Oregon, for the fourth night Saturday despite calls from the mayor and police chief for calm.

Several hundred people took to the streets and Portland authorities made multiple arrests after protesters threw bottles and other items at officers in riot gear and blocked streets and light rail lines. The exact number of arrests wasn't immediately available.

The gathering came after a news conference Saturday in which Mayor Charlie Hailes and Police Chief Mike Marshman urged restraint after several days of violent marches that damaged property and left one person shot.

Friday night, police used flash-bang grenades to disperse a crowd of hundreds in the downtown area. Seventeen people were arrested and one man was shot and suffered non-life-threatening injuries in what police described as a confrontation with gang members. Two people were arrested on attempted murder charges.

In Los Angeles, an estimated 8,000 people marched through downtown streets Saturday to condemn what they saw as Trump's hate speech about Muslims, pledge to deport people in the country illegally and crude comments about women.

Jennifer Cruz, 18, of Ventura, California, carried a sign that asked: "Legalize weed but not my Mom?" — a reference to Californians' Tuesday passage of a measure legalizing recreational marijuana use.

Cruz said her parents have been in the United States illegally for 30 years, although her mother has spent years seeking citizenship. She called the possibility of their deportation terrifying.

"We talk about it almost every day," she said. "My Mom wants to leave it in the hands of God, but I'm not just going to sit back and not do anything. I'm going to fight for my parents, even if it kills me."

"What he's been able to do is make 50 percent of the nation look over their shoulder," he said. "If you're gay, if you're LGBT, if you're Muslim, if you're Latin, if you're special needs, if you're female, it's a much unsafer place now."

"What is happening today is going to be the normal for a while," he said of the demonstration, "because we're not going to just sit back and watch our rights being taken away, our health care being taken away."

Meanwhile, several dozen Trump supporters gathered at his vandalized star on the Hollywood Walk of Fame to urge the protesters to give him a chance. One person held a cross that read "All lives matter to me."

In other parts of the country, spirited demonstrations on college campuses and peaceful marches along downtown streets have taken place since Wednesday.

Trump supporter Nicolas Quirico was traveling from South Beach to Miami. His car was among hundreds stopped when protesters blocked Interstate 395.

"Trump will be our president. There is no way around that, and the sooner people grasp that, the better off we will be," he said. "There is a difference between a peaceful protest and standing in a major highway backing up traffic for 5 miles. This is wrong."

More than 200 people, carrying signs, gathered on the steps of the Washington state Capitol. The group chanted "not my president" and "no Trump, no KKK, no fascist USA."

In Cincinnati, hundreds of protesters already had taken to the streets early Saturday afternoon to protest a jury's failure to reach a verdict in the trial of a white former police officer who killed an unarmed black motorist in 2015.

A mistrial was declared in the trial of former University of Cincinnati officer Ray Tensing. He was fired after shooting Sam DuBose in the head after pulling him over for a missing front license plate last year.

In Chicago, hundreds of people including families with small children chanted "No hate. No fear. Immigrants are welcome here" Saturday as they marched through Millennium Park, a popular downtown tourist attraction.

Sonja Spray, 29, who heard about the protest on Facebook, said she has signed an online petition urging the electoral college to honor the popular vote and elect Clinton.

Demonstrations also took place internationally. A group of Mexicans at statue representing independence in Mexico City expressed their concerns about a possible wave of deportations. One school teacher said it would add to the "unrest" that's already in Mexico. About 300 people protested Trump's election as the next American president outside the U.S. Embassy near the landmark Brandenburg Gate in Berlin.

President Barack Obama meets in Berlin next week with Chancellor Angela Merkel and several other European leaders, and is expected to confront global concerns about Trump's election.