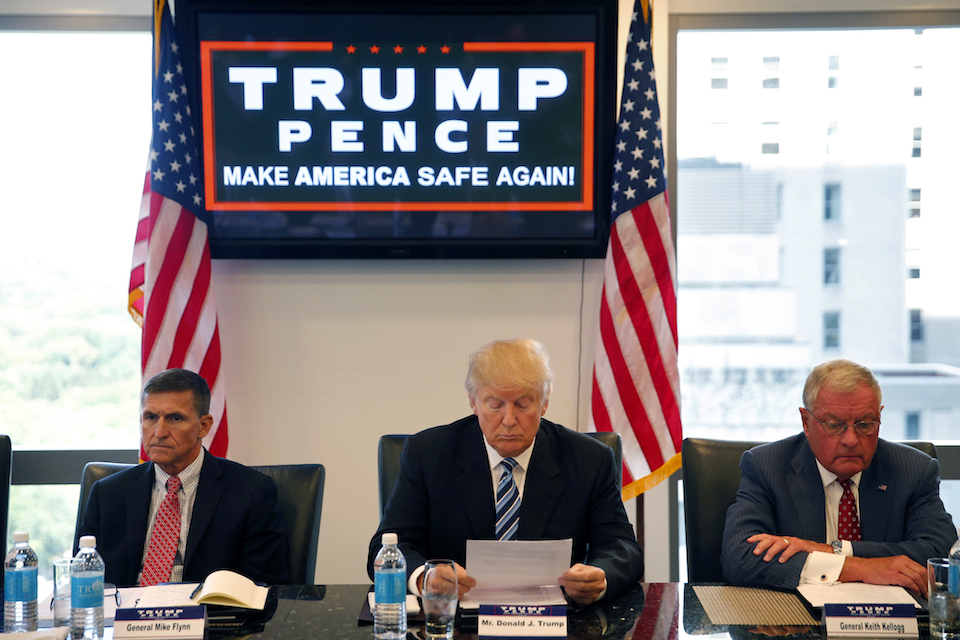 WASHINGTON (AP) — President-elect Donald Trump's transition team is rich with lobbyists and includes a climate change-denier and an ex-federal prosecutor involved in the mass firings of U.S. attorneys.

Some of the individuals listed in an organizational chart of Trump's top transition personnel, obtained by The Associated Press:

Retired Lt. Gen. Keith Kellogg has been working closely with Trump adviser and retired Army Lt. Gen. Mike Flynn, advising the Trump campaign on matters relating to foreign policy and national security. He was chief operating officer of the Coalition Provisional Authority in Iraq, the interim governing body following the fall of Saddam Hussein in 2003.

He previously worked as executive vice president of research and technology for Virginia-based information technology firm CACI International, which works as a contractor for defense, intelligence and homeland security agencies.

Rep. Devin Nunes, R-Calif., the chairman of the House intelligence committee, has been named to the executive committee of Trump's transition committee. In the role, Nunes said he would help advise the president-elect on appointing individuals to Cabinet and other top positions in the next administration.

Retired Lt. Gen. Ron Burgess served in the Army for 38 years. He spent most of his tenure working in top military intelligence and security assignments. He was director of the Defense Intelligence Agency from 2009 until July 2012.

In the fall, he lamented in a speech in Alexander City, Alabama, that new U.S. military recruits will likely be fighting in the Middle East for years to come. He wished current policymakers well and said, "We can't just keep playing this same military version of whack-a-mole."

Mira Ricardel has served as acting assistant secretary of defense for international security policy during the George W. Bush administration from 2003 to 2005. She is a former vice president of business development for Boeing Strategic Missile & Defense Systems, a company that receives a steady flow of contracts from the Defense Department and is a major player in the defense industry.

Retired Brig. Gen. Michael Meese is among the individuals leading the transition for the Department of Veterans Affairs. In 2005, he served as executive director of the secretary of the Army's transition team. He is also a former chief operating officer for the American Armed Forces Mutual Aid Association, a 136-year-old nonprofit organization that assists the armed forces community with insurance, financial planning, survivor assistance and other benefits.

Mike Rogers is taking the lead on crafting Trump's national security team. The former Michigan congressman chaired the House intelligence committee. Rogers is a former U.S. Army officer and FBI special agent. He is a board member of IronNet Cybersecurity, a consultancy run by former NSA director Keith Alexander.

Jim Carafano is the Heritage Foundation's vice president for foreign and defense policy studies and is tasked with transforming the State Department. A 25-year Army veteran, Carafano has been advising Trump on terrorism and border security. In a recent radio interview, Carafano said he told Trump that the next administration must pay more attention to transnational criminal cartels, work more closely with state and local governments to enforce border security, and fight al-Qaida globally.

Malpass spent 15 years at global finance company Bear Stearns, a key player in Wall Street before the financial crisis that plunged the country into a massive recession. In a 2007 Wall Street Journal editorial, published nine months before the collapse of his own firm, he wrote:

"Housing and debt markets are not that big a part of the U.S. economy, or of job creation. It's more likely the economy is sturdy and will grow solidly in coming months, and perhaps years."

Bill Walton is a senior fellow of the Center on Wealth, Poverty and Morality at the Discovery Institute and vice president of the Council for National Policy. He is also chairman of Rush River Entertainment, which focuses on producing feature films.

Kevin O'Connor served as U.S. attorney in Connecticut from 2002 to 2008, overseeing the office that secured a corruption guilty plea from ex-Gov. John Rowland. He served briefly as chief of staff to Attorney General Alberto Gonzales, a George W. Bush appointee who resigned from the Justice Department in 2007 amid a scandal over the firing of U.S. attorneys.

After working as a partner at the Bracewell & Giuliani law firm, O'Connor is now managing director and general counsel for Point72 Asset Management, which manages the personal wealth of billionaire hedge fund executive Steven A. Cohen.

Myron Ebell is the director of the Center for Energy and Environment at the Competitive Enterprise Institute. Sometimes called a climate "denier-in-chief," he has long had ties to the fossil fuel industry. Ebell has called for abolition of the EPA and wants to scrap the Paris climate treaty, a deal Trump has vowed to withdraw from.

J. Steven Hart is a former Justice Department special assistant in charge of processing federal judicial nominations under President Ronald Reagan. He is the chairman of Williams & Jensen, a tax and business lobby group in Washington. His biography says he was named one of Washington's top lobbyists by Washingtonian magazine and The Hill newspaper.

Andrew Bremberg is a policy adviser and a member of the counsel on nominations for Senate Majority Leader Mitch McConnell. A former policy director for the Republican presidential campaign of Wisconsin Gov. Scott Walker, Bremberg has also served as a chief of staff at the Office of Public Health and Science, Department of Health and Human Services, according to his LinkedIn profile.

Shirley Ybarra previously served as Virginia's transportation secretary from 1998 to 2002, and was a senior policy adviser at the U.S. Department of Transportation under the George H.W. Bush administration. She is best known for her advocacy of "public-private partnerships" to raise money for major transportation infrastructure projects and she is a proponent of toll roads.

Ray Washburne is a longtime Republican fundraiser and former finance chairman for the Republican National Committee. Based in Dallas, Washburne runs a boutique investment firm that owns shopping centers and a chain of Mexican restaurants. Before backing Trump, Washburne was the finance chief for New Jersey Gov. Chris Christie's presidential campaign.

Paul Atkins is an avowed opponent of regulating Wall Street and served as Securities and Exchange commissioner from 2002 and 2008. During that period, he backed lifting restrictions on leverage taken by investment banks, a move that some blamed for exacerbating the financial crisis.

Michael Korbey was a senior adviser to the Social Security Administration under the tenure of President George W. Bush. He helped spearhead a public campaign to rally support behind privatizing Social Security. Before that, he worked for the lobbyist group United Seniors Association.

Williamson (Bill) Evers was an adviser to U.S. Secretary of Education Margaret Spellings in 2007 under President George W. Bush. A fellow at the Hoover institution, Evers is a strong critic of the standardized curriculum known as "common core," which he has described as "undemocratic."

Michael Torrey is a top Washington agriculture lobbyist and founder of Michael Torrey Associates. He served for one year as deputy chief of staff at the Agriculture Department under the George W. Bush administration and as a deputy assistant secretary of congressional relations at the department for a year prior to that.