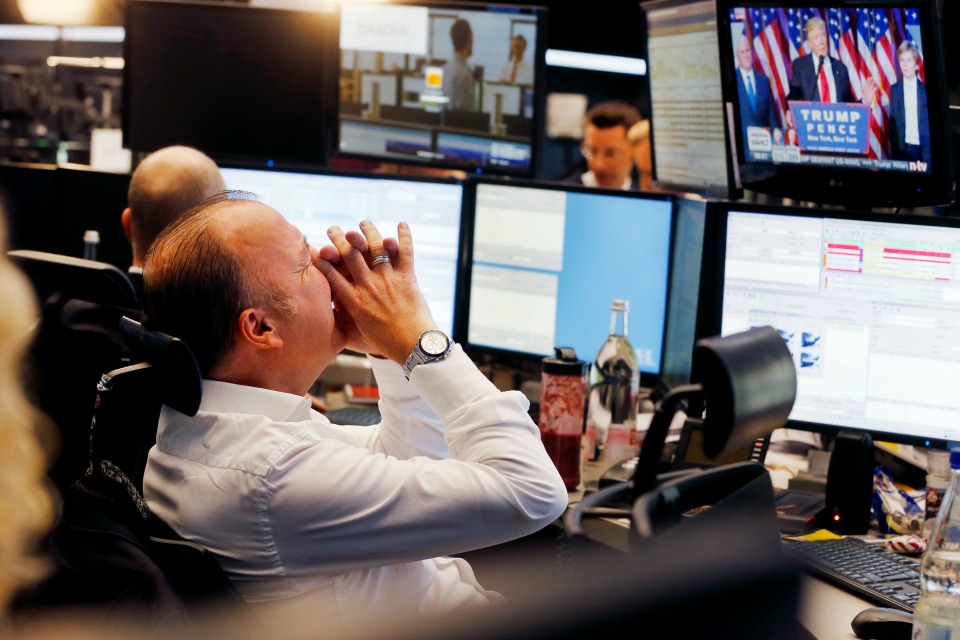 Donald Trump's promise to put America first helped propel him to the U.S. presidency, but it also has unleashed uncertainty on the global economy — skewering major trading partners and offering few specifics that might calm allies, businesses and investors.

"We simply can't know what type of President Trump will be," said Paul Ashworth, chief U.S. economist for Capital Economics.

Trump campaigned by threatening to rip up trade deals he deems unfavorable. He promised penalties for U.S. firms that offshore factory jobs. He would label China a currency manipulator. He would repeal Obamacare. He staked his credibility on erecting a wall along the Mexican border and limiting immigration — ideas that connected with a mainly white working class that has felt abandoned by political leaders.

The president-elect has promised to spur growth with a roughly $6 billion tax cut over the next decade, a policy that could help the U.S. economy but also cause its national debt to jump, according to outside economists.

Yet the Republican nominee provided so few fleshed-out policy details that he created the impression of a White House that would be run largely on his instincts. For several investors and analysts, that approach has left a deep sense of unease about the direction of the U.S. economy under his watch.

Among other things, Trump has dismissed the monthly U.S. government jobs report — a fundamental bellwether of the economy — as largely a hoax. He floated the idea of neglecting the national debt to negotiate for better terms. He argued that he can boost growth by cutting taxes for the wealthy, slashing federal regulations and reducing the country's dependence on imports.

He has promised that the U.S. economy can grow nearly 4 percent a year — roughly double its current rate. The Federal Reserve has estimated that growth will average below 2 percent. (During his campaign, Trump attacked the U.S. central bank as a pawn of President Barack Obama.)

"Taking Trump's campaign rhetoric at face value, there is reason to believe that the policies he supports could push the U.S. into a recession and could create wider contagion," said Megan Greene, chief economist at Manulife Asset Management.

The one certainty is that Trump "will face fewer obstacles in pushing through his agenda" because of the Republican majorities in the House and Senate, Greene said.

Uncertainty itself carries risks to the global economy and has been one factor slowing growth since the 2008 financial crisis and Great Recession. It can make businesses and government postpone spending on new plants, infrastructure and jobs.

Key trading partners appear nervous, although their anxieties might appear to be vindication for Trump voters who oppose globalization.

Ulrich Grillo, head of the Federation of German Industries, said that "Donald Trump would be well advised not to seal off the U.S. economy from the world. Otherwise, the lack of clarity about the future course will lead to significant negative effects for the world economy."

The U.S. is a major market for German companies like BMW and Daimler. By one estimate, some 1.5 million jobs depend on exports to the United States, the country's biggest trading partner.

The U.S. and the European Union are already struggling to make progress in free trade talks due to anti-trade sentiment on both sides of the Atlantic. The trade section of Trump's website makes no mention of the talks.

U.S. import barriers could hit economies such as China and South Korea especially hard as they struggle with slowing growth. China's exports in the first 10 months of this year fell by 7.7 percent from the same period of 2015 while its latest quarter economic growth of 6.7 percent is the lowest quarterly level since the 2008 global crisis.

World trade in merchandise will grow this year by only 1.7 percent, the slowest pace since the financial crisis of 2008-9, according to the World Trade Organization.

In his victory speech, Trump adopted a softer tone but pledged to put U.S. interests first.

"I want to tell the world community that while we will always put America's interests first, we will deal fairly with everyone. With everyone. All people and all other nations," Trump said. "We will seek common ground, not hostility. Partnership, not conflict."

Domestically, Trump has pledged to overhaul U.S. infrastructure, something that could boost growth through higher government spending. He has vowed to spend $1 trillion on roads, tunnels, ports and bridges. But funding details remain uncertain; he has emphasized private money and said his plan would not increase the deficit.

An analysis in June by Moody's Analytics said if Trump's proposals on taxes, trade, immigration and government spending were fully adopted, it would slash U.S. economic output and eliminate 3.5 million jobs, leaving the U.S. economy "isolated and diminished."

The Trump victory follows another populist election victory: the British vote to leave the European Union. And it could energize right-wing, anti-immigration and anti-globalization forces.

Meanwhile, Trump's victory is likely to lead the Fed to delay another rise to its key interest rate. An increase had been considered all but certain in mid-December, reflecting a strengthened U.S. economy. But the uncertainty generated by a Trump victory could prompt the Fed to wait.

Josh Boak in Washington, Youkyung Lee in Seoul, Danica Kirka in London, Joe McDonald in Beijing, David McHugh in Berlin and Annabelle Liang in Singapore contributed to this report.