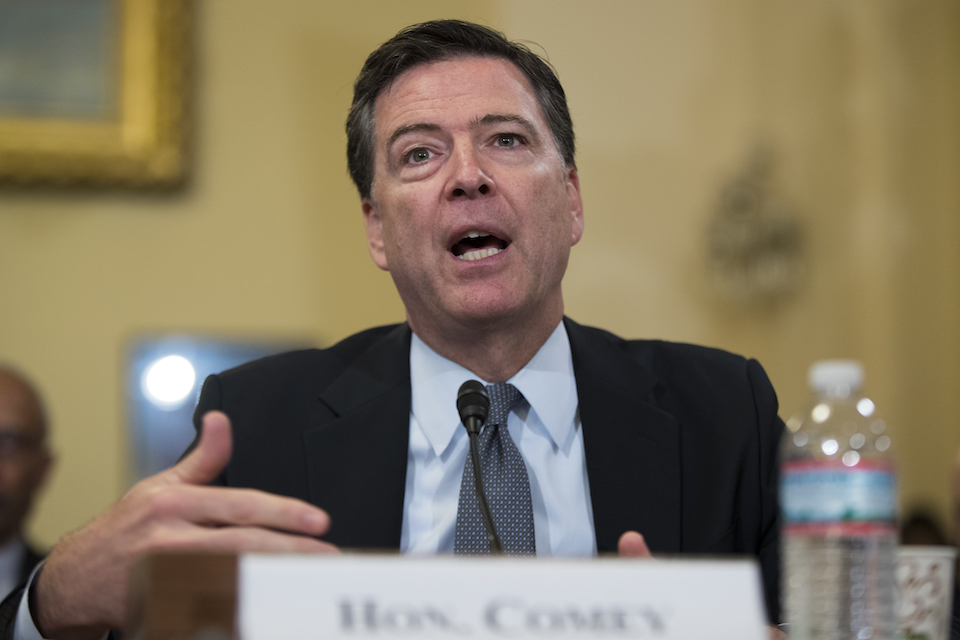 WASHINGTON (AP) — The FBI's announcement that it recently came upon new emails that may be pertinent to the Hillary Clinton private email server investigation raised more questions than answers.

FBI Director James Comey said in a letter to Congress on Friday that the bureau had discovered the emails while pursuing an unrelated case and would now review whether the messages were classified.

The three-paragraph announcement, though vague in details, immediately resurfaced an issue that has dogged Clinton for her entire campaign — and will clearly persist for the remaining 10 days.

Some questions and answers:

Q: WHERE DID THESE EMAILS COME FROM?

A: The emails referenced in Comey's letter emerged during a wholly separate criminal sexting investigation into former Rep. Anthony Weiner, the estranged husband of Huma Abedin, one of Clinton's closest aides, a U.S. official with knowledge of the matter told The Associated Press .

Federal authorities in New York and North Carolina are investigating online communications between Weiner, a New York Democrat who is separated from Abedin, and a 15-year-old girl.

It was not clear from Comey's letter who sent or received the emails in question, what they were about, or what connection, if any, they might have to the earlier Clinton investigation.

Q: WHY IS THIS COMING OUT NOW, 10 DAYS BEFORE THE ELECTION?

A: Apparently because the emails were found very recently. In his letter to Congress, Comey said he had been briefed only Thursday by the investigators.

Comey has acknowledged there are no easy decisions on timing in the case. In an internal email sent Friday to FBI employees, he said he was trying to strike a balance between keeping Congress and the American people informed and not creating a misleading impression about the emails given their significance was not yet known.

"In trying to strike that balance, in a brief letter and in the middle of an election season, there is significant risk of being misunderstood, but I wanted you to hear directly from me about it," he wrote.

Q: WHAT KIND OF POLITICAL IMPACT MIGHT THIS HAVE?

A: It's too soon to tell, but the email matter is something Clinton thought was behind her months ago. Comey couldn't guarantee the FBI's review would be over by Election Day.

Her campaign chairman, John Podesta, said it was "extraordinary" for the public to see a letter like that so soon before the election.

Clinton herself called on the FBI to immediately release the full details of what it is now examining. She said she did not expect the additional review to produce conclusions different from the ones reached in July, when the investigation was closed without charges.

Q: IS THIS DISCLOSURE STANDARD FOR THE FBI?

A: No, but neither was the Clinton email investigation.

In a nod to the extraordinary nature of an election-year probe into a presidential candidate, Comey promised extraordinary transparency as he announced the conclusion of the investigation last July.

"I am going to include more detail about our process than I ordinarily would, because I think the American people deserve those details in a case of intense public interest," Comey said at an unusual news conference in which he announced the FBI would not recommend criminal charges against Clinton or anyone else.

Since then, the FBI has periodically released investigative files — that is, summaries of witnesses who were interviewed. Those materials aren't typically seen by the public.

Comey has served in government under both Democratic and Republican administrations. He speaks repeatedly about the need for the FBI to be accountable to the public. His letter Friday seemed in keeping with a statement he made to Congress last month, that although the FBI had concluded its investigation, "we would certainly look at any new and substantial information" presented to it.

Q: BUT WHY WAS THE LETTER SO VAGUE?

A: For one thing, the FBI avoids publicly discussing ongoing criminal investigations, or even confirming that it has one open. Comey surely wouldn't want to use a letter to Congress to release information about an open case.

It also appears from the letter that the FBI isn't sure yet what it has. Comey said the FBI cannot yet assess whether the material is significant, or how long it would take to complete the additional work.

All that said, the letter's vagueness was immediately seized upon by critics as unacceptable and leaving the American people in the dark.

Q: WHAT HAPPENS NOW? DOES THIS INCREASE THE LIKELIHOOD THAT SOMEONE COULD BE CHARGED?

A: The FBI will review the emails to see if they were classified and were improperly handled.

But it's impossible to say based on Comey's letter that anyone is in greater jeopardy than before.

The FBI announced in July that scores of emails from Clinton's server contained information that was classified at the time it was sent or received. So, additional emails determined to be classified might do nothing to change the legal risk for anyone who sent them.

Comey said in July that the FBI had found no evidence of intentional or willful mishandling of classified information, of efforts to obstruct justice or of the deliberate exposure of government secrets. Those were elements that Comey suggested were needed to make a criminal case.

Nothing in the letter appears to change that standard.