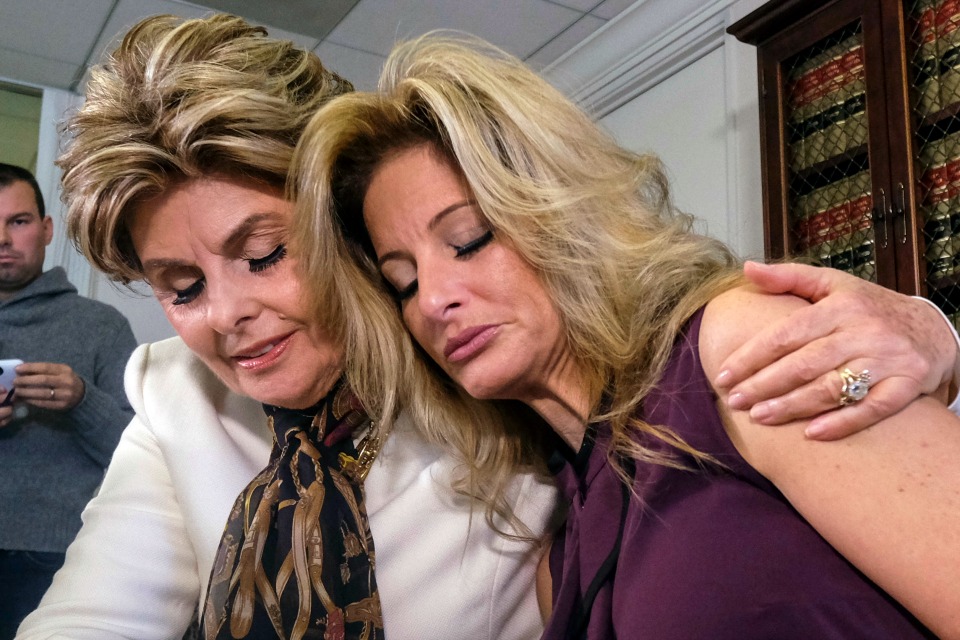 GREENSBORO, N.C. (AP) — New allegations of sexual misconduct rocked Donald Trump's campaign Friday as the candidate denounced his accusers, blasted news organizations that have reported the claims and said it all shows "the whole election is being rigged."

The Republican presidential nominee said his advisers have urged him to talk about other issues, but he felt compelled to defend himself against a stream of accusations from women he said he has never met.

"I feel I have to talk about it," he told a rally at Greensboro, North Carolina, adding, "It's a phony deal. I have no idea who these women are."

The latest accuser, a former contestant on Trump's reality show, "The Apprentice," said he made unwanted sexual advances at a Beverly Hills hotel in 2007. Summer Zervos, 41, is among several women who have made similar allegations in the past week.

Zervos was an "Apprentice" contestant in 2006. She said she later contacted Trump to inquire about a job with one of his businesses. She said she had an initial meeting with Trump, and when they parted he kissed her on the lips and asked for her phone number. Weeks later Trump called to invite her to meet him at a hotel, she said, and during their meeting he became sexually aggressive, kissing her open mouthed and touching her breast.

Earlier Friday, the Washington Post reported the contentions of another woman who says she was sexually assaulted by Trump. Kristin Anderson told the Post she was sitting on a couch with friends at a New York nightclub in the early 1990s when someone's hand reached up her skirt and touched her through her underwear.

Anderson told the newspaper that she pushed the hand away, turned around and recognized Trump as the man who had groped her.

He said his accusers are looking for "fast fame" by making unsubstantiated claims.

"These people are sick," he said.

His running mate, Mike Pence, said earlier Friday that the Trump campaign will soon produce evidence to support Trump's denial that he forced himself on women.

In his Greensboro remarks, Trump took aim at the news media, accusing reporters of conspiring with Democrat Hillary Clinton to defeat his candidacy.

"This whole election is being rigged," he declared. The accusations of sexual misconduct, he said, are "poisoning the minds of the electorate."

"We can't expose our children to this any longer, not for another minute, let alone for four years," the first lady told Clinton supporters at a rally in New Hampshire. In a passionate address Thursday, Mrs. Obama said that after years of working to end "this kind of violence and abuse and disrespect ... we're hearing these exact same things on the campaign trail. We are drowning in it."

In an appearance Friday on Fox News, Republican vice presidential candidate Pence blamed the news media for what he characterized as an obsession with "unsubstantiated" claims by Trump's accusers.

"There will be more evidence coming out" to prove Trump's innocence, Pence said. Asked what evidence he was talking about, he said, "The campaign is working on bringing that information out." He did not elaborate.

Clinton had no rallies planned Friday, but President Barack Obama campaigned for her in Ohio. The president chided Trump for claiming the election is rigged against him, and he asserted that the Republican poses a risk to the American political system.

"Democracy is on the ballot," Obama said in Cleveland.

The allegations against Trump and his countercharges dominated the campaign Thursday and have distracted attention from the release of thousands of hacked emails from Clinton campaign chairman John Podesta that include some potentially damaging information.

A batch of emails released on Thursday by WikiLeaks, the anti-secrecy group, indicated that Clinton's 2008 presidential campaign had tried to move the Illinois Democratic primary to a later date, believing it might help her. On Friday WikiLeaks released a fresh pile of emails from Podesta's private account.

Trump asserts that the news media is soft-pedaling the WikiLeaks emails at his expense. Five women have told publications detailed stories about encounters with Trump that ended with groping, kissing and other unwanted sexual advances.

Trump's struggling candidacy is clearly having an impact on the Republican Party's ability to raise money. The Republican National Committee has raised about 25 percent less over the past three months than it did over the same period four years ago, when Mitt Romney was atop the ticket.

Trump's claims that he is being falsely accused of inappropriate conduct with women appeared undermined by a video that surfaced last week in which he bragged about kissing and groping women without their permission. Similar behavior was detailed by women who accused Trump in articles published late Wednesday by The New York Times and the Palm Beach Post. Separately, a People magazine reporter offered a first-person account accusing Trump of attacking her in 2005 while she was in Florida to interview him and his pregnant wife.

The New York billionaire denied the allegations and blamed them on Clinton's campaign and a complicit news media. He promised to sue his media critics and said he was preparing evidence that would discredit his female accusers, whom he called "horrible people. They're horrible, horrible liars." For her part, Clinton said "the disturbing stories just keep on coming."