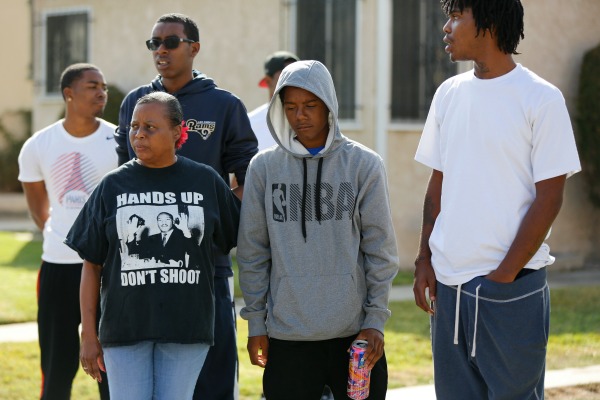 LOS ANGELES (AP) — The Los Angeles police chief on Monday defended the use of deadly force against two men in separate fatal shootings over the weekend, saying one turned toward officers with a gun and the other pointed what looked like a real gun at police.

The shootings come amid heightened tensions over police actions involving black people and other minorities across the country.

In the shooting of Snell, officers tried to pull over a car he was in because it had paper plates that didn't match the year of the vehicle — a possible indication of a stolen car and something commonly seen in drive-by shootings, Beck said.

Snell, seated in the back, looked at officers and then ducked down "as if to hide from them," Beck said.

When officers tried to pull the car over, Snell jumped out holding his waistband and the foot pursuit began, he said.

After a chase of several hundred yards, Beck said, Snell took a gun from his waistband and turned in the direction of the pursuing officers, prompting the shooting.

Snell died at the scene and police recovered a fully loaded semi-automatic gun with one round in the chamber within 5 feet of where Snell lay, Beck said, adding that the weapon had not been fired.

Beck did not say whether one or more officers fired, how close they were to Snell, or whether the car turned out to be stolen.

The officers were not wearing body cameras, but a surveillance video from a business clearly showed Snell was armed, Beck said.

The shooting occurred in a Los Angeles neighborhood where nearly 450 people have been shot this year, making it the worst in the city for gun violence, Beck said.

"We are doing our absolute best to take guns out of the hands of those that would use them against others, and sometimes that leads to circumstances where Los Angeles police officers are put into peril and have to defend themselves," the chief said.

A group of people protested outside Beck's news conference, chanting, "No justice, no peace, no racist police." Three were arrested for unlawful assembly after refusing orders to leave police headquarters and take their demonstration to a public street.

"We're so tired," said protester Jade Daniels, 24. "These kids don't want to die. What black person would point a gun at a group of cops?"

Activists have called on police to publicly name the officers involved in the shooting, which occurred near Snell's home. They also appealed for a quick, transparent investigation.

Snell was on probation after pleading no contest to one felony count of assault likely to produce great bodily injury, according to court records.

On Sunday, a man was shot when he pointed what turned out to be a replica handgun at police, Beck said, adding that an orange tip had been colored black to make the replica look real.

The man remained unidentified. He was only described as Hispanic.

Beck said both officers involved in that shooting were wearing body cameras and the footage supports their accounts while refuting claims that the man was shot on the ground.

The officers were responding to reports of a man with a gun.

"In both these instances the officers feared for their lives because of the actions of the individuals that they were pursuing," Beck said.

Snell was the third black man in five days to die in confrontations with police in Southern California.

Last Tuesday, Alfred Olango was fatally shot by an officer in the San Diego suburb of El Cajon when Olango took a "shooting stance" and pointed at an officer with what turned out to be a 4-inch vape pen — an electronic cigarette device.

On Friday, Reginald Thomas died after being shot with a Taser by police in Pasadena. He was armed with a knife and his wife described him as mentally ill.

Meanwhile, the family of a black man killed by police in Sacramento in July demanded murder charges Monday against two officers heard on a dash-cam video talking about trying to hit the man with their police cruiser before he was shot 14 times.