Analysis: In Debate, Clinton Was Prepared, Trump Was Trump 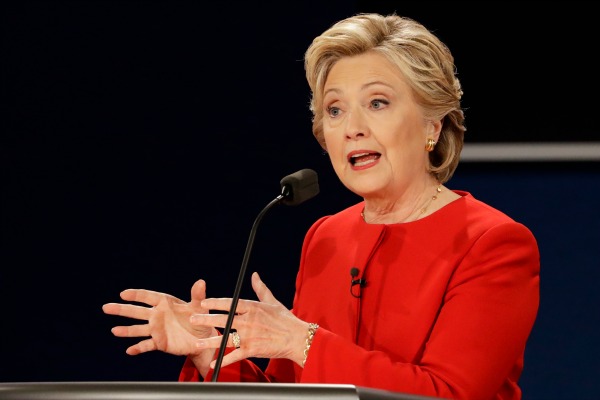 WASHINGTON (AP) — She was at her best. He was not at his worst.

If Clinton aimed to push her famously unpredictable opponent into a made-for-sharing disqualifying moment, she didn't quite get there. If Trump set out to show America — particularly women — he's completed the transformation from cartoonish pop culture staple to leader worthy of the Oval Office, he still has a way to go.

But in a debate full of feisty exchanges and a personal scuffle or two, the candidates demonstrated clearly how they've gotten this far. Clinton was polished, prepared and proud of it —a Hermione Granger at a podium. She came with sharp and practiced answers, most notably a newly direct one for the questions about her private email server that has dogged her candidacy for months. She grinned broadly and calmly, even when under fire, and she mocked but only gently the man she called "Donald."

"I think Donald just criticized me for preparing for this debate. And, yes, I did," Clinton said. "And you know what else I prepared for? I prepared to be president. And I think that's a good thing."

Trump addressed his opponent as "Secretary Clinton" — even asking for her approval for the term — but by the end he called her "Hillary."

The care he took with her title was a reminder of the voters he was aiming to win over. Women, particularly college-educated white women, are the key to Trump turning his current burst of momentum into a sustained surge that lasts until Election Day. The 70-year-old businessman has struggled to persuade women, even those with doubts about the first woman president, to get behind his bid, thanks in part to his performances in past debates, which led to cringe-worthy challenges to moderator Megyn Kelly or opponent Carly Fiorina.

Trump avoided another jaw-dropping, decorum-busting moment on Monday night, but it was hard to see that he did much to soften his image. He repeatedly and aggressively interrupted Clinton to rebut or deny her charges, at times talking over her or interrupting. When asked by moderator Lester Holt to explain a previous comment that Clinton doesn't have a "presidential look," Trump simply repeated the comment.

Clinton came prepared to pounce: "Well, as soon as he travels to 112 countries and negotiates a peace deal, a cease-fire, a release of dissidents, an opening of new opportunities in nations around the world, or even spends 11 hours testifying in front of a congressional committee, he can talk to me about stamina."

As the debate went on, Clinton seemed to gain confidence and a better sense of timing. When Trump concluded a long and tangled defense of his years-long campaign to challenge President Barack Obama's citizenship, she paused for a moment to let Trump's words sink in.

"Well, just listen to what you heard," she said.

Trump, too, had his moments.

He delivered a searing indictment of Clinton as just another insider proposing the same-old solutions for an economy on the brink of "crashing down." The riff was a potent reminder of why his candidacy has become a vehicle for the alienated white Americans feeling pinched by the economy and forces of globalization.

"Typical politician. All talk, no action. Sounds good, doesn't work. Never going to happen," he said, encapsulating the core message of his campaign.

He showed Clinton remains vulnerable on her support for trade deals, forcing Clinton in her clearest fib of the night when she denied having called the Trans-Pacific Partnership the "gold standard" of trade agreements and claimed she merely said she hoped it would be a good deal.

But Trump missed opportunities to dive into Clinton's other vulnerabilities. She was also able to make swift work of her email scandal, saying simply "It was a mistake and I take responsibility for that."

"That's for sure," Trump interjected, but left it there.

The Republican didn't raise Clinton's description of half of his supporters as "deplorables" or the Clinton Foundation and its donor network.

That left Clinton largely free to play the prepared grown up to Trump's agitated upstart.

Even Trump granted her that:

"She's got experience," he said. "But it's bad experience. And this country can't afford to have another four years of that kind of experience."