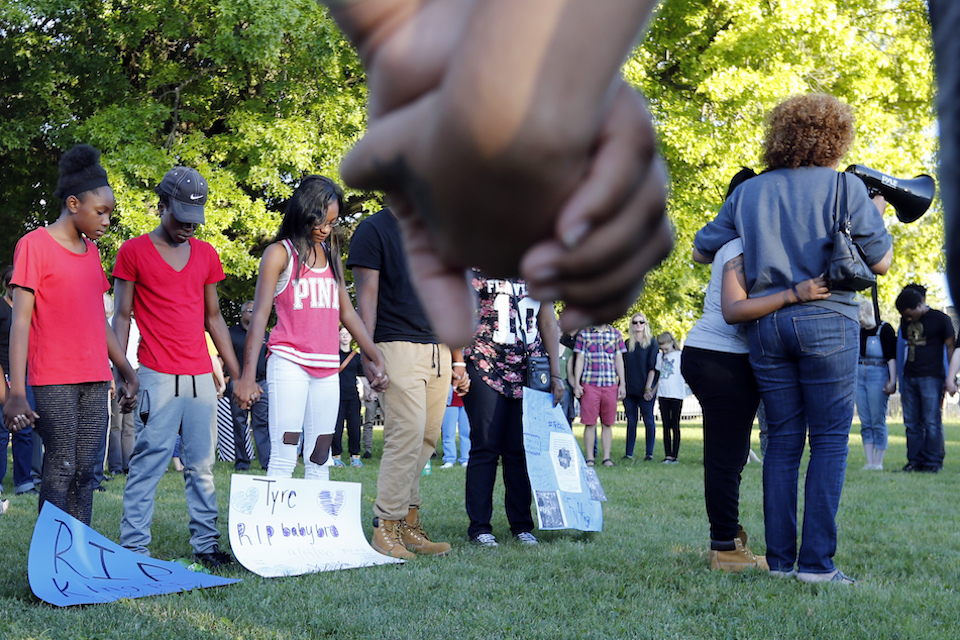 COLUMBUS, Ohio (AP) — Attorneys for the family of a 13-year-old Ohio boy fatally shot by a policeman said Friday they want to hear from witnesses, because the police version of events "might not be true."

Meanwhile, a 19-year-old who said he was the boy's friend told a newspaper that Tyre King had a real-looking BB gun, was out to rob someone and ran from police.

Police say an officer who believed the gun was real shot the boy Wednesday night after witnesses reported a group of people had robbed a man of $10.

Relatives are still grieving and working on the funeral arrangements, Sean Walton, an attorney for Tyre's family, said Friday morning. Walton said he's looking for people with information in the case to come forward.

"We just have many different witness accounts that are contradictory to the police officer's version of events," Walton said. "What is currently out there might not be true."

The 19-year-old friend, Demetrius Braxton, told The Columbus Dispatch that King wanted to rob someone for money and that he was with Tyre when the shooting occurred.

Braxton said he and Tyre initially had run away but complied when police told them to get down. Tyre then got up, ran and was shot, he told the newspaper.

Braxton was interviewed by police but not charged.

A spokesman for Columbus police says they won't comment on how Braxton's story compared with officers' accounts.

Authorities have said officers investigating the robbery report east of downtown Columbus spotted three males who matched the description of the suspects. Two of the males ran away when officers tried to speak with them, investigators said.

The police chased the pair into an alley and tried to take them into custody. Tyre pulled out what looked like a handgun, and an officer fired, hitting the boy multiple times, police said.
The shooting will be investigated thoroughly, authorities said. Evidence will automatically be presented to a grand jury to determine if the officer's actions were justified or if charges are warranted.

Authorities say the fatal police shooting of King, a 13-year-old Columbus, Ohio boy who officers said pulled a BB gun from his waistband that looked like a real weapon will be investigated thoroughly to determine if charges are warranted. Evidence from Wednesday, Sept. 14, 2016 shooting will automatically be presented to a grand jury. (Walton + Brown LLP via AP)The Franklin County coroner said Friday that Tyre's autopsy was complete but she wouldn't yet release details, including where he was shot. The official manner of death is pending, with a final report not expected for several weeks, said Dr. Anahi Ortiz.

On Thursday night, dozens attended a vigil near the shooting site, including members of Tyre's youth football team. Some carried signs calling for justice, while candles spelled out "RIP Tyre King."

Friday morning, a candle burned next to a bouquet of white flowers in the alley where the boy was shot. A block away, signs saying Black Lives Matter and We Will Remember remained at a park where the vigil was held.

The officer who fired was identified as Bryan Mason, a nine-year veteran of the force. Police records show that in 2012 he shot and killed a man who was holding another person at gunpoint. A grand jury declined to indict Mason with criminal wrongdoing in the shooting.

The officer is a well-respected policeman who did what he had to do in that circumstance, Jason Pappas, head of the local police union representing Mason, said Friday.

"He is, you know, not happy about having to be in that situation, but at the end of the day he had to do what he had to do," Pappas said.