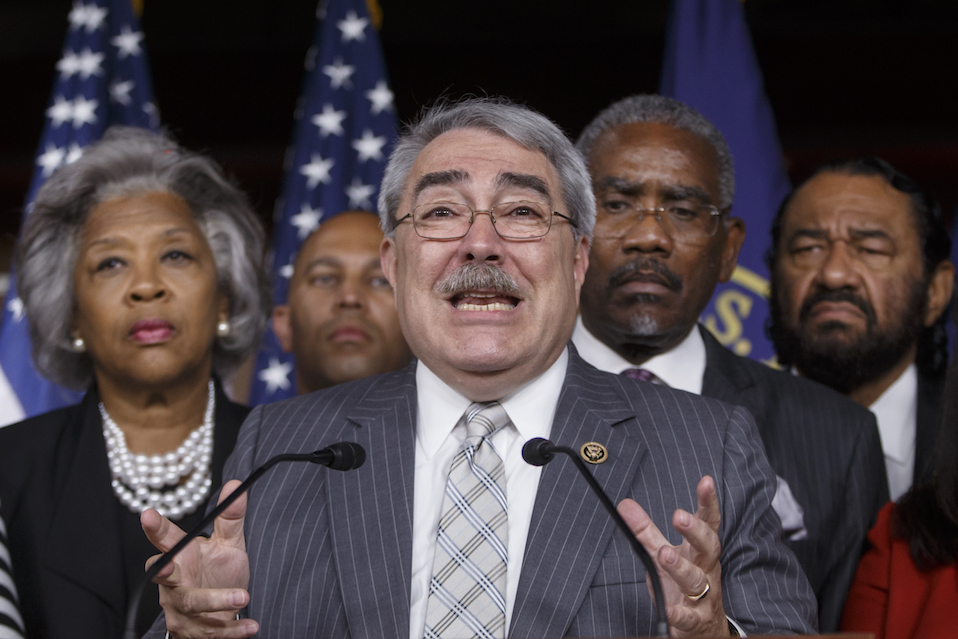 Despite the fact that Obama himself said he viewed this renewed burst of commentary about his birth as "fairly typical" and not surprising, members of the Congressional Black Caucus were clearly angry. During a heated news conference Friday during the CBC's annual legislative conference in Washington, several lawmakers denigrated Trump for perpetrating birther falsehoods for so long.

Many blacks gave Trump no credit for finally letting go of the long dispelled notion that Obama, born in Hawaii in 1961, actually hailed from outside the country he now leads. They said they believed it was some sort of political calculation by Trump in hopes of getting votes from blacks or moderate whites.

"In the black community, it's always been viewed as kind of offhanded racism," said Preston Thymes, a Scottsdale, Arizona, marketing manager.

"He's a backtracker," said Bailey Billings, 25, of Madison, Wisconsin. "He says whatever he thinks he should say, what he's directed by his team to say, to make him seem like a better human that we should all vote for. ... I just don't care for anything that he says."

And Trump's attempt to pull Democratic presidential nominee Hillary Clinton into the fray by claiming she endorsed birther tactics against Obama during their 2008 race didn't seem to sit well with some black voters either.

Trump's political rise was fueled in part by his presence among birthers, and as recently as this week, he declined to say where he believed Obama was born. In reversing his stance Friday, Trump did not say why, or when, he changed his mind.

Questions about Obama's legitimacy strike a nerve with many black voters, said Corey Fields, a Stanford University sociology professor and author of "Black Elephants In The Room," a book about black Republicans.

"It's an effort to delegitimize a very powerful and compelling achievement by an African-American political leader," Fields said. "Often black voters can translate this to their own lived experience moving through the white professional (world) where the legitimacy of your achievements are often called into question. This is a very similar process on a large scale. This is something that can resonate at an individual level."

Former Secretary of State Colin Powell criticized Trump in leaked emails released earlier this week. "All his lies and nonsense just pile up," Powell wrote. "I just go back to the unforgivable one. Trying to destroy the President elected by the American people with his fictitious investigation into this source of birth. Absolutely disgraceful." Powell has not denied the leaked emails' authenticity.

Others questioned why Trump and his campaign would not squash the issue immediately, with the November election so close. Renee Amoore, who is leading black voter outreach efforts for Trump in Pennsylvania, said Trump has "gotten better" and "been on message" in recent weeks, and is not sure why Trump chose to respond to his role in the birther movement now.

"For whatever reason, somebody thought this was part of the message," said Amoore, referring to Trump's campaign, which released a statement late Thursday on the issue.

Daphne Goggins, 53, a longtime registered Republican who serves as a ward leader in Philadelphia, still blames Clinton's surrogates for propagating the issue, and is angry that Trump is being held responsible for the false claims that Obama was not an American.

"I'm not understanding how she can dump this on Trump now," Goggins said. "Who knows? They may have even been doing it together. But who cares? It shouldn't be an issue."

Rufus Bartell, a Detroit businessman and founder of a retail and consulting group, said there's been too much damage for Trump to make up with many black voters, who have been a powerful voting bloc during Obama's time in Washington.

"I think it's too late, regardless of what he does. But if he really wants a relationship with the African-American community, then it's certainly not too late to start a relationship. It just won't impact this election," Bartell said.