DIVIDED AMERICA: In Recovery, Many Poor Schools Left Behind 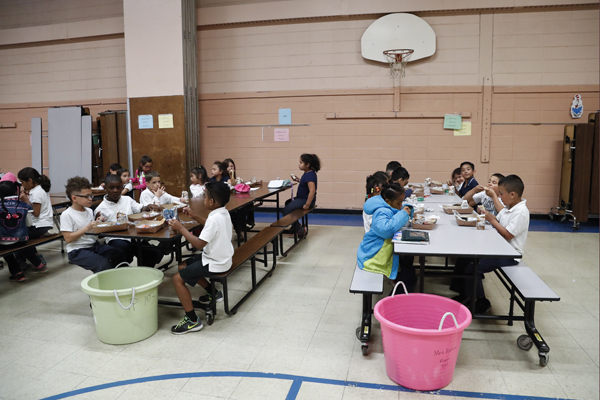 Stevenson, mostly white, is flush with resources. The high school has five different spaces for theater performances, two gyms, an Olympic-size pool and an espresso bar.

Meanwhile Waukegan, with its mostly minority student body, is struggling. At one school, the band is forced to practice in a hallway, and as many as 28 students share a single computer.

And the gap has only been getting wider — here in the suburbs north of Chicago, and in many places across the nation. In the years following the 2008 financial crisis, school districts serving poor communities generally have been hit harder than more affluent districts, according to an Associated Press analysis of local, state and federal education spending.

The result has been a worsening of America's rich schools, poor schools divide — and its racial divide, because many poor districts are also heavily minority. It also perpetuates the perception that the system is rigged in favor of the haves, at the expense of the have-nots — a major driver of America's angst in this election year.

The AP found that aid to local districts from the federal government surged after the economic downturn, as part of the stimulus, but then receded. Schools were left to rely more on state funding that has not bounced back to pre-recession levels. And poorer districts that cannot draw on healthy property tax bases have been left in the lurch.

The effects vary widely across the 50 states. Each has its own unique funding formula.

For example, per-pupil spending in poorer Missouri districts fell behind richer districts in 2013 — the first time in a well over decade.

Most rich districts have seen a steady increase in revenue while poorer districts — such as Louisiana RII, a predominantly white district 80 miles northwest of St. Louis — have seen cuts since 2010. That rural district has started waiting longer to replace textbooks, and it will likely abandon initiatives to distribute new computers and to bring wireless internet into classrooms. Todd Smith, the superintendent, said the district will likely seek a tax increase or a bond sale because there isn't enough money for basic maintenance.

"We find ourselves more and more dipping into our reserves," Smith said.

In Connecticut's largest city, Bridgeport, schools have struggled with cuts in state and federal grants, Superintendent Frances Rabinowitz said. And the gap widens between her district and neighboring, affluent Fairfield County towns with smaller class sizes and students with far fewer needs.

The result? No aides for kindergarten classrooms, or guidance counselors for elementary schools.

"I feel like I am cutting the lifeblood of the system," said Rabinowitz, whose schools are more than 80 percent black or Hispanic.

The impact can be long-lasting, researchers say. A study for the nonprofit and non-partisan National Bureau of Economic Research tracked students enrolled in districts where there was a prolonged increase in school funding.

Students educated in flush times finished more years of school, were less likely to live in poverty as adults, and made about 7.25 percent more in wages.

The widening funding gap that favors richer schools in Illinois is an extreme example.

When her athletic teams would travel to other schools for competitions, the affluence was clear from the minute they pulled up, Ocampo says. And sometimes when those opposing teams would show up to Waukegan, they would hear the chatter: "This is it?" or "Why is their locker room like a dungeon?"

Over the past five years, Waukegan District 60 lost $43 million in state aid because Illinois cut education funding, according to Gwendolyn Polk, associate superintendent of business and financial services. The district did its best to keep the cuts from affecting the classroom, which meant putting off regular maintenance and cobbling together funds to deal with emergencies.

Stevenson District 125, in contrast, educates students in an area northwest of Chicago that's home to upper-class professionals and corporate headquarters, the kind of districts parents move into in hopes of giving their children a leg up. Stevenson has felt minimal impact from state budget cuts, spokesman Jim Conrey said.

Ocampo plans to study education and Spanish in college this fall. She's proud of where she comes from, but she says some more money would be helpful in ways that go beyond better facilities or more teachers.

"I feel like funding is more of a motivational gift than an actual physical gift," she said. "It's how it makes you feel about yourself."

EDITOR'S NOTE — This is part of Divided America, AP's ongoing exploration of the economic, social and political divisions in American society.