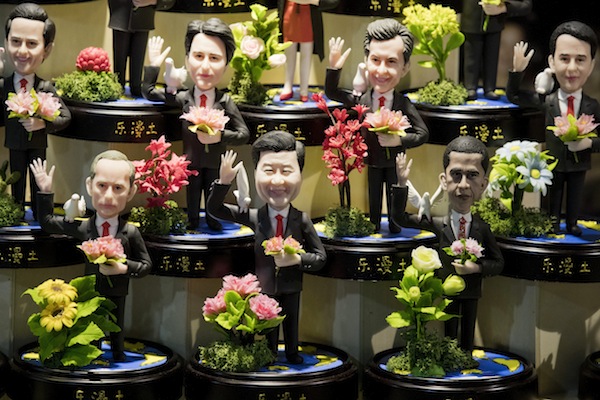 HANGZHOU, China (AP) — The Latest on G-20 summit in China (all times local):
10:50 a.m.
World leaders from 20 industrial and emerging-market nations are arriving in the southern Chinese city of Hangzhou for a summit starting Sunday.

Millions of people have been moved out of city ahead of the summit to ensure there are no protests.

Among the latest arrivals Saturday morning are Canadian Prime Minister Justin Trudeau, who has already visited Beijing and Shanghai on a state visit, and U.N. Secretary-General Ban Ki-moon.

Setting aside their cyber and maritime disputes, President Barack Obama and China's President Xi Jinping on Saturday sealed their nations' participation in last year's Paris climate change agreement. They hailed their new era of climate cooperation as the best chance for saving the planet.

At a ceremony on the sidelines of a global economic summit, Obama and Xi, representing the world's two biggest carbon emitters, delivered a series of documents to U.N. Secretary-General Ban Ki-moon. The papers certified the U.S. and China have taken the necessary steps to join the Paris accord that set nation-by-nation targets for cutting carbon emissions.

"This is not a fight that any one country, no matter how powerful, can take alone," Obama said of the pact. "Some day we may see this as the moment that we finally decided to save our planet."

Xi, speaking through a translator, said he hoped other countries would follow suit and advance new technologies to help them meet their targets. "When the old path no longer takes us far, we should turn to innovation," he said.

The formal U.S.-Chinese announcement means the accord could enter force by the end of the year, faster than anticipated. Fifty-five nations must join for the agreement to take effect. The nations that have joined must also produce at least 55 percent of global emissions.

The U.S. and China together produce 38 percent of the world's man-made carbon dioxide emissions.

The White House has attributed the accelerated pace to an unlikely partnership between Washington and Beijing. To build momentum for a deal, they set a 2030 deadline for China's emissions to stop rising and announced their "shared conviction that climate change is one of the greatest threats facing humanity." The U.S. has pledged to cut its emissions by at least 26 percent over the next 15 years, compared to 2005 levels.