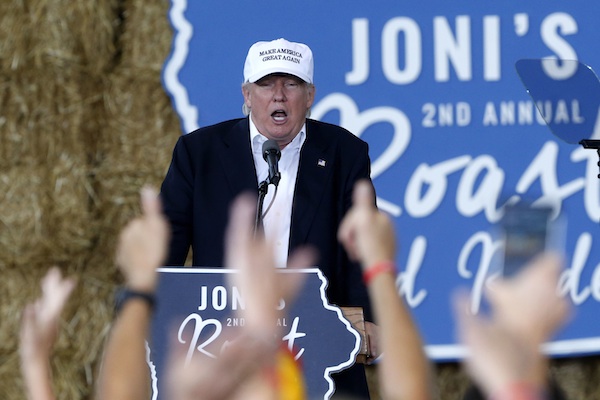 WASHINGTON (AP) — The Latest on the 2016 presidential campaign (all times EDT):
11 p.m.
Donald Trump's campaign is planning its biggest ad buy to date, upward of $10 million on commercials airing over the next week or so.
The campaign expects the ads to begin airing as soon as Monday in nine states: Ohio, Pennsylvania, North Carolina and Florida, where the campaign has already been on the air, along with New Hampshire, Virginia, Iowa, Colorado and Nevada. They're all important swing states.
Trump has so far been badly outspent by his Democratic rival, Hillary Clinton, and groups supporting her candidacy.
The new investment comes amid signs that Trump's lagging poll numbers may be improving against Clinton's following a campaign reboot. ___
7:50 p.m.
Republican presidential nominee Donald Trump says he's planning a speech Wednesday on illegal immigration.
Trump tweets on Sunday he'll deliver the speech in Arizona, adding "Big crowds, looking for a larger venue."
Trump's position on whether or not to deport an estimated 11 million immigrants here illegally has been unclear in recent days. He pledged months ago to have authorities carry out widespread deportations, but this past week sent out mixed signals on whether he was shifting his stance on that.
His surrogates and allies struggled on Sunday talk shows to explain his position.
___
11:50 a.m.
Libertarian presidential candidate Gary Johnson says he's optimistic about getting into the presidential debates, but admits it would be "game over" if he doesn't make the cut.
Johnson, the former governor of New Mexico, must average 15 percent in five recognized polls to make the debate stage.
Johnson says on "Fox News Sunday" that his polling numbers are rising and that his campaign is spending money in many states. He estimates his support level now to be at 10 percent in the polls the Commission on Presidential Debates is monitoring.
Johnson says he is fiscally conservative and socially "inclusive." He's also skeptical about using the U.S. military to change regimes in other nations. He says that philosophy represents where most Americans stands.
___
9:45 a.m.
Donald Trump's chief supporters, led by his vice presidential running mate, are having trouble speaking for him, especially on immigration policy.
Mike Pence on CNN's "State of the Union" Sunday could not say whether the Republican presidential nominee is sticking by, or backing off, his pledge to deport the estimated 11 million people in the United States illegally with the help of a "deportation force."
Pence and other Trump supporters across the Sunday talk show dial said Trump will detail his immigration policy over the next two weeks. They insisted that Trump has been "consistent" on his immigration policy.
In recent days, Trump has suggested he might be "softening," saying Wednesday that he might be open to allowing at least some immigrants in the country illegally to stay, as long as they pay taxes.
The next day, he ruled out legal status, "unless they leave the country and come back," he told CNN.
Republican presidential candidate Donald Trump speaks at Joni's Roast and Ride during a fundraiser at the Iowa State Fairgrounds, in Des Moines, Iowa, Saturday, Aug. 27, 2016. (AP Photo/Gerald Herbert)