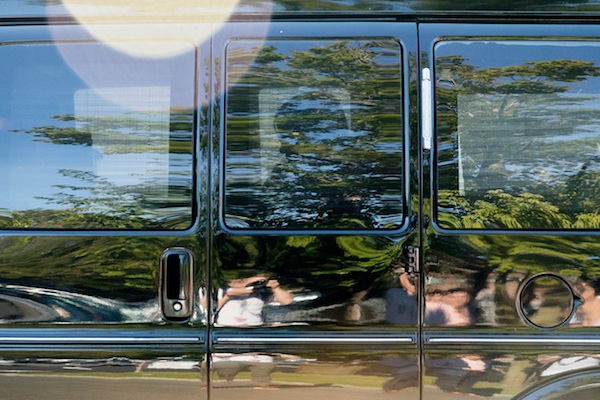 WHITE PLAINS, N.Y. (AP) — Hillary Clinton received her first national security briefing Saturday as the Democratic presidential nominee, meeting with intelligence officials for an overview of the major threats facing the nation around the globe.

Clinton attended the briefing for more than two hours at the FBI office in White Plains, New York, near her suburban New York City home.

Republican Donald Trump received his briefing earlier this month, a customary move for major party nominees but one that has been the subject of a political tussle during the campaign.

Trump was campaigning on Saturday in Iowa, headlining Republican Sen. Joni Ernst's annual "Roast and Ride" fundraiser at the Iowa State Fairgrounds. The celebrity businessman was not planning to join the 42-mile motorcycle ride that is part of the event but bringing his campaign to a state where polls show a tight contest, a rare bright spot for Trump amid a sea of challenging battleground states.

In an interview with The Associated Press, Iowa's Republican Gov. Terry Branstad said he'd like Trump to focus his message more on a renewable fuel standard that is important to his state's corn farmers. Trump and Clinton are polling "about even" in Iowa, he added, and he'd like Trump to launch campaign ads in the state since Clinton has already done so.

"I don't like that but hopefully that's going to change," he said.

The activities capped a week that saw some of the harshest exchanges between the two presidential rivals, with Clinton asserting in a fiery Reno, Nevada, speech on Thursday that Trump was stoking a "radical fringe" within the Republican Party, including anti-Semites and white supremacists. Trump, who is trying to win over moderate voters and minorities who have been unsettled by some of his provocative remarks and policy proposals, has tried to paint Clinton as a racist.

The Republican released an online video that includes footage of the former first lady referring to some young criminals as "super predators" in the 1990s. The video also shows Clinton's former Democratic rival, Sen. Bernie Sanders, denouncing the phrase as "a racist term." Clinton has since apologized.

Clinton has said that Trump and his supporters have taken on extremist views, casting the race in a Friday MSNBC interview as "not a normal choice between a Republican and a Democrat."

The back-and-forth also has been waged in the national security space.

As President Barack Obama's secretary of state, Clinton held a high security clearance and received a copy of the President's Daily Brief — the highest-level U.S. intelligence document that includes sensitive intelligence and analysis from around the world.

Saturday's briefing was Clinton's first since becoming her party's nominee and she did not receive it with any aides present, her campaign said. Trump was accompanied by retired Lt. Gen. Michael Flynn and New Jersey Gov. Chris Christie when he received his briefing.

The briefings, which are delivered by career staffers from the Office of the Director of National Intelligence, have been traditional for presidential nominees for more than 60 years to ensure a smooth transition for the next commander in chief. Some Trump critics have questioned whether he could responsibly handle sensitive information, while some of Clinton's critics say her use of a private email server while secretary of state raises concern over her ability to protect classified information.

Trump is trying to shore up his standing with Latino voters. In Las Vegas, Trump met Friday with two dozen Latino supporters to discuss strategies for boosting Hispanic turnout in the swing state. He has sought to make the case that his economic policies would be better for small minority-owned businesses than those of Clinton.

"People don't know how well we're doing with the Hispanics, the Latinos," Trump said at his hotel just off the Vegas Strip. "We're doing really well."

Trump has suggested that minorities have been left behind by Democratic economic policies and hammered the nation's sluggish GDP growth as "a catastrophe."

But he has continued to send mixed signals about a key issue for many Latinos: immigration. While he has not wavered on his desire to build an impenetrable wall along the border with Mexico, he exhibited indecisiveness in recent days about his plan to deport 11 million immigrants living in the U.S. illegally.

Aides have said he would announce his immigration policy in a speech in the coming days, but his campaign has yet to set a date.