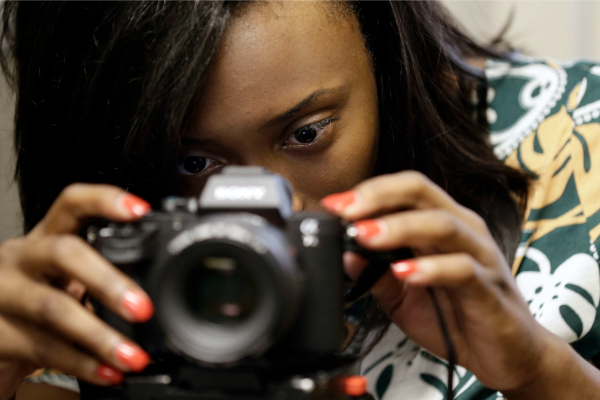 The oldest millennials — nearing 20 when airplanes slammed into New York City's Twin Towers — are old enough to remember the relative economic prosperity of the 1990s, and when a different Clinton was running for president. The nation's youngest adults — now nearing 20 themselves — find it hard to recall a reality without terrorism and economic worry.

Now millennials have edged out baby boomers as the largest living generation in U.S. history, and more than 75 million of them have come of age. How they vote on Nov. 8 will shape the political landscape for years to come. Yet with less than three months to go before Election Day, the values of young Americans whose coming-of-age was bookended by the Sept. 11, 2001, terrorist attacks and the Great Recession are emerging as an unpredictable grab bag of fiscal conservatism and social liberalism.

What they share is a palpable sense of disillusionment.

As part of its Divided America series, The Associated Press spent time with seven millennial voters in five states where the oldest and largest swath of this generation — ages 18 to 35, as defined by the Pew Research Center — could have an outsized influence in November. They are a uniquely American mosaic, from a black teen in Nevada voting for the first time to a Florida-born son of Latino immigrants to a white Christian couple in Ohio.

Taken individually, these voters illustrate how millennials are challenging pollsters' expectations based on race, class and background in surprising ways, reacting to what they see as the loss of the American Dream. They are intent on shaping something new and important that reflects their reality — on their own terms.

"Millennials have been described as apathetic, but they're absolutely not. I think you can see from this election year that they're not, and that millennials have a very nuanced understanding of the political world," said Diana Downard, a 26-year-old Bernie Sanders supporter who will vote for Hillary Clinton. "So yeah, I'm proud to be a millennial."

Just 5 percent of young adults say that America is "greater than it has ever been," while 52 percent feel the nation is "falling behind" and 24 percent believe the U.S. is "failing," according to a GenForward poll released last month. The first-of-its kind survey of young people between the ages of 18 and 30 was conducted by the Black Youth Project at the University of Chicago with the Associated Press-NORC Center for Public Affairs Research.

Fifty-four percent believe only a few people at the top can get ahead in today's America, and 74 percent say income and wealth distribution are uneven, according to the poll.

Briana Lawrence, a 21-year-old videographer and eyelash artist from Durham, North Carolina, identifies with those numbers.

She was just 7 on Sept. 11 and the immediate aftermath of the terrorist attacks is the only time she can remember the nation feeling united, even if only by grief. With $40,000 in student debt, she's working hard to establish her own cosmetic business after graduating from North Carolina Central University. She plans to vote for Hillary Clinton, but feels America has lost its way.

"My biggest hope for this country is for us to come back together as a community. As a United States of America, to unite together again," she said.

But millennials know that getting to that place won't be easy. Many, like Lawrence, are saddled with college debt and have struggled to find jobs.

In Denver, 1,600 miles to the west, Downard also has almost $40,000 in student debt that's already changed her path. A dual U.S. and Mexican citizen, she feels she can't afford to work for an overseas organization — one of her dreams — and plans to delay having a family at least 10 years.

"We went to college in pursuit of a better life and really, now, we're kind of just paralyzed by our student debt," said Downard, who works for a nonpartisan organization that works to improve youth voter registration. "You can't even think about those sorts of alternative options."

In part because of these economic pressures, a 2014 Pew Research Center poll found that — for the first time in more than 130 years — adults ages 18 to 34 were slightly more likely to be living with their parents than with a spouse or partner in their own residence. And one in four millennials say they might not ever marry, a Pew survey found.

Only 8 percent of young adults feel their household's financial situation is "very good," and education and economic growth ranked No. 1 and No. 2 as the issues that will most influence their vote, according to the GenForward poll.

"We might be in a 'good-ish' finance situation right now as a country, but I was always taught there's ups and downs in the finance world and with every up, there's a down. So we should be preparing for that down to come," said Brien Tillett, who graduated this spring from a high school just miles from the Las Vegas Strip.

Tillett, who turned 18 in July, was 10 when the recession hit and sucked the wind out of his family. His mother, a single parent, was in a car accident that hospitalized her for three months and, with no safety net, the family struggled.

"It was to the point where I would not ask my mother to go hang out with my friends because I didn't want her to worry about money," said Tillett, whose brush with insolvency has deeply influenced his views.

The national debt is his No. 1 concern.

As a young black man, he's turned off by remarks by Donald Trump that he finds racist and xenophobic, but likes Trump's aggressive stance on the economy. "We're trillions of dollars in debt and that should not be happening," said Tillett, who started running track at a two-year college this month.

He strongly considered voting for Trump, but will now vote for Clinton because Trump has become "a loose cannon" in recent weeks. Still, he's angry about Clinton's use of a private email server when she was Secretary of State. "We have to basically question if we can truly trust her with all of our nation's secrets," he said.

Anibal David Cabrera was in high school when Tillett was just a small boy — but he's part of the same generation.

The son of a Honduran mother and Dominican father, he graduated from college in 2008 as the recession was picking up steam. A finance major, he wanted to work for a hedge fund or bank, but the economic collapse meant jobs had dried up. Eventually Cabrera, now 31 and living in Tampa, Florida, got an accounting job at a small tech firm.

He feels he's entering the prime of his life a few steps behind where he could have been, through no fault of his own.

A Jeb Bush die-hard in the primaries, he's now supporting Trump and hopes the business mogul can make good on his promises.

"My biggest hope for the country would be a prosperous economy. That is something my generation has kind of never seen," Cabrera said. "We never got to experience the rapid growth of the '80s or the '90s, and I think my generation would love to see that."

Shared pain does not lead to shared views among his generation.

Millennial voters' disdain for traditional party affiliation have made them particularly unpredictable. Half describe themselves as political independents, according to a 2014 Pew Research report — a near-record level of political disaffiliation. As a generation, they tend to be extremely liberal on social questions such as gay marriage, abortion and marijuana legalization. Yet they skew slightly conservative on fiscal policy and are more in line with other generations on gun control and foreign affairs.

Trip Nistico, a recent graduate of the University of Colorado, Boulder's law school, is an avid supporter of gun rights who goes to shooting ranges but also supports same-sex marriage. The 26-year-old Texas native voted for President Barack Obama in 2008 — his first presidential election — and Mitt Romney in 2012.

"I'm pretty liberal on social issues. I don't really think that — on a national level — they're really as important as some of these other issues we've been discussing," he said.

Trump remains wildly unpopular among young adults, however, and nearly two-thirds of Americans between the ages of 18 and 30 believe the Republican nominee is racist, according to the GenForward poll. Views of Hillary Clinton also were unfavorable, though not nearly to the same extent.

Many millennials are angry that Democratic challenger Bernie Sanders has withdrawn and are disillusioned with the electoral process.

Forty-two percent of voters under 30 have "hardly any confidence" that the Republican presidential nomination process is fair and 38 percent feel the same about the Democratic process, according to the GenForward poll. The survey was taken before the leak of Democratic National Committee emails that roiled the Democratic Party.

Bill and Kristi Clay, young parents and devout Christians from rural Ohio, offer a portrait of millennials struggling to choose a candidate who matches their values.

They have two sons, 4 and 6, and are adopting a child from the Philippines. They serve meals with their church at inner-city soup kitchens in nearby Columbus and have a mix of political views that, Bill Clay says, comes from following "the lamb, not the donkey or elephant."

Kristi Clay opposes same-sex marriage and abortion and names those as her top issues this election. Yet the 32-year-old school librarian is still reluctantly leaning toward voting for Clinton. "You have to look at the big picture," she says.

Bill Clay, meanwhile, shares his wife's views on the more conservative issues, but they hold what some would consider more liberal views on matters such as immigration.

"If we're going to try to be Christian-like, and embrace people, I don't think you can shut the borders to an entire group of people just because of the fear that some of them don't like us," said Clay, 33, who voted for Barack Obama in the last two elections but supported Republican Marco Rubio this time.

Yet that strong faith has not helped him find much inspiration in the current candidates, both of whom he sees as self-serving and unwilling to budge on important issues.

"I'm feeling a little pessimistic this year," he said.

The Clays say they will vote no matter what, but whether their millennial brothers and sisters do the same is an open question.

The millennial vote rose steadily beginning in 2002 and peaked in 2008, with excitement over Obama's first campaign. In 2012, however, just 45 percent of millennials cast ballots and participation has leveled off or dropped ever since, said John Della Volpe, director of polling at Harvard University's Institute of Politics.

"They have a somewhat different perspective in terms of politics, "Della Volpe said. "It hasn't really worked. They haven't been part of a movement that's been effective."

Yet Tillett, the teen in Nevada, exudes youthful idealism as he talks about casting his first vote in a presidential election.

"It means a lot to me personally because I'm making a difference in my life and in the country. My vote does matter," he said. "It really does."