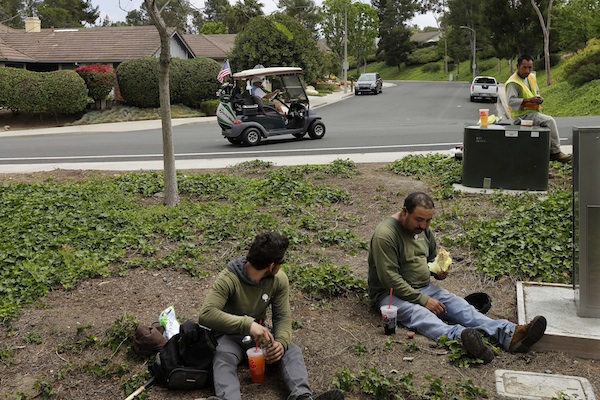 WASHINGTON (AP) — A selection of issues at stake in the presidential election and their impact on Americans, in brief:

INCOME INEQUALITY
Income inequality has surged near levels last seen before the Great Depression. The average income for the top 1 percent of households climbed 7.7 percent last year to $1.36 million, according to tax data. That privileged sliver of the population saw pay climb at almost twice the rate of income growth for the other 99 percent, whose pay averaged a humble $48,768.

Dogged on the issue during the primaries by Bernie Sanders, Hillary Clinton has highlighted inequality in multiple speeches. She hopes to redirect more money to the middle class and impoverished. Clinton would raise taxes on the wealthy, increase the federal minimum wage, boost infrastructure spending, provide universal pre-K and offer the prospect of tuition-free college.

Donald Trump offers a blunter message about a system "rigged" against average Americans. To bring back jobs, Trump has promised new trade deals with better terms, greater infrastructure spending than Clinton foresees and higher budget deficits. But Trump has also proposed a tax plan that would allow the wealthiest Americans to keep more money.

More than 28,000 Americans died from overdosing on opioids in 2014, a record high for the nation.

That's 78 people per day, a number that doesn't include the millions of family members, first responders and even taxpayers who feel the ripple of drug addiction in their daily lives.

A rise in prescription painkillers is partially to blame: The sale of these drugs has quadrupled since 1999, and so has the number of Americans dying from an addiction to them. When prescriptions run out, people find themselves turning to the cheaper alternative heroin and, increasingly, the even more deadly drug fentanyl.

Recovering addicts and their family members are increasingly speaking out, putting a face on drug addiction and lessening the stigma surrounding it. But dollars for prevention, treatment and recovery services are still hard to come by, leaving many people waiting weeks or months to find the treatment they're seeking. Meantime, family members empty bank accounts in search of help, while law enforcement officers and emergency rooms serve as a first line of defense.

Donald Trump says the wall he wants to build along the southern border is essential to stopping the flow of illegal drugs into the country. Hillary Clinton, meanwhile, pledges to spend $10 billion to increase access to prevention, treatment and recovery services, among other things.

NORTH KOREA
Pariah state North Korea could soon be capable of targeting America with nuclear weapons. What can the U.S. do to stop it?

Diplomacy and economic sanctions have not worked so far. North Korea's isolation is deepening, but it has continued to conduct nuclear test explosions and make advances in its missile technology.

Republican presidential candidate Donald Trump says the U.S. can put more pressure on China to rein in its North Korean ally. He says he is willing to meet the North Korean leader, Kim Jong Un.

Democrat Hillary Clinton wants the world to intensify sanctions as the Obama administration did with Iran, a course that eventually opened the way for a deal to contain its nuclear program.

But it will be tough to force North Korea back to negotiations that aim at its disarmament in exchange for aid. Kim views atomic weapons as a security guarantee for his oppressive regime

About 9 in 10 Americans now have health insurance, more than at any time in history. But progress is incomplete, and the future far from certain. Rising costs could bedevil the next occupant of the White House.

Millions of people previously shut out have been covered by President Barack Obama's health care law. No one can be denied coverage anymore because of a pre-existing condition. But "Obamacare" remains divisive, and premiums for next year are rising sharply in many communities.

Whether Americans would be better off trading for a GOP plan is another question. A recent study found that Donald Trump's proposal would make 18 million people uninsured. GOP congressional leaders have a more comprehensive approach, but key details are still missing.

Overall health care spending is trending higher again, and prices for prescription drugs — new and old — are a major worry.

Medicare's insolvency date has moved up by two years — to 2028.

Hillary Clinton would stay the course, adjusting as needed. Republicans are united on repealing Obama's law, but it's unclear how they would replace it.

AMERICA AND THE WORLD

How the U.S. uses its influence as the world's sole superpower is a central feature of presidential power.

It can mean taking the country to war — to protect the homeland or to defend an ally. Or it can mean using diplomacy to prevent war. It can affect U.S. jobs, too, as choices arise either to expand trade deals or to erect barriers to protect U.S. markets.

In the contest between Hillary Clinton and Donald Trump, America's role in the world is a point of sharp differences. Each says the U.S. must be the predominant power, but they would exercise leadership differently. Trump calls his approach "America first," meaning alliances and coalitions would not pass muster unless they produced a net benefit to the U.S. Clinton sees international partnerships as essential tools for using U.S. influence and lessening the chances of war.

These divergent views could mean very different approaches to the military fight and ideological struggle against the Islamic State, the future of Afghanistan and Iraq, the contest with China for influence in Asia and the Pacific, and growing nervousness in Europe over Russian aggression.

VOTING RIGHTS
Voting rights in America are in flux. Republican-controlled legislatures are tightening voter laws, placing limits on early voting and same-day registration, and imposing new requirements for IDs at polling places. In 2013, the Supreme Court invalidated a key provision of the 1965 Voting Rights Act. That provision had required states with a history of racial discrimination to get federal preclearance to change election laws.

The issue has become highly partisan with the rapid growth of minority populations, which in recent presidential elections have tilted heavily Democratic.

The Obama Justice Department has challenged voter ID and other laws, saying they could restrict access for minorities and young people. Recent lower court rulings temporarily softened some of the toughest restrictions, but litigation remains knotted up with Supreme Court appeals likely. Bills in Congress to restore the Voting Rights Act are stalled.

This story is part of AP's "Why It Matters" series, which will examine three dozen issues at stake in the presidential election between now and Election Day. You can find them at: http://apnews.com/tag/WhyItMatters