Manafort Out Amid Scrutiny of Covert Lobbying Campaign 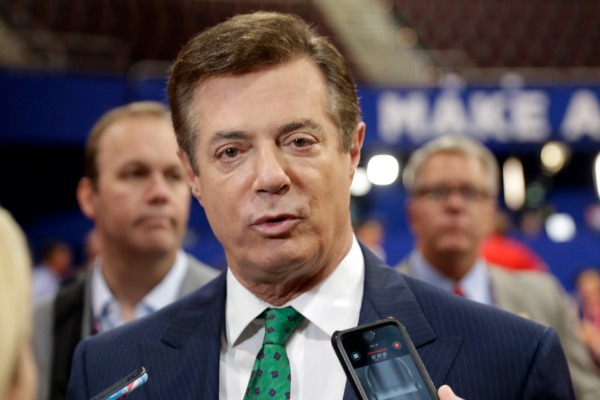 WASHINGTON (AP) — The sudden resignation Friday of Donald Trump's campaign chairman put renewed emphasis on revelations about his past work on behalf of Ukraine's pro-Russian political leaders, including his firm's role directing a covert Washington lobbying operation that would have required him under federal law to disclose his efforts to the Justice Department.

Paul Manafort resigned from the Trump campaign amid scrutiny of his Ukrainian work — but others involved in the once-secret influence campaign remain working for Trump in senior roles, including Manafort's deputy Rick Gates.

Meanwhile, new documents released by Ukrainian anti-corruption investigators appear to link the lobbying work the men directed in the U.S. to handwritten entries in ledgers listing $12.7 million in cash payments alongside Manafort's name. Some of that money was listed as paid to Manafort through two founding members of the European Centre for a Modern Ukraine, a Brussels-based nonprofit whose lobbying efforts Manafort and Gates oversaw.

While working under Manafort, Gates sent emails to Mercury LLC, which along with the Podesta Group Inc. represented the European nonprofit on Ukrainian issues between 2012 and 2014. The messages show Gates oversaw lobbying strategy and execution by Mercury employees.

The emails were sent by Gates to Vin Weber, the head of Mercury's Washington office, and to Michael McSherry, a Mercury lobbyist who Politico reported was tapped earlier this month for a senior position in Trump's campaign. Buzzfeed reported McSherry's connection to the lobbying effort Thursday.

In an interview earlier this week, Weber acknowledged knowing that Gates and Manafort were working for Ukrainian political leaders but said they had not played a role in his firm's lobbying. McSherry did not respond Friday to emails requesting comment or a phone message left at his office.

In an interview before the AP obtained Gates' emails, Tony Podesta of the Podesta Group acknowledged working closely with Gates on the lobbying — but said he had believed Gates was working for an independent nonprofit.

Under the U.S. Foreign Agents Registration Act, people who lobby on behalf of foreign political leaders or political parties must provide detailed reports about their actions to the Justice Department. A violation is a felony and can result in up to five years in prison and a fine of up to $250,000.

None of the firms, nor Manafort or Gates, disclosed their work to the Justice Department counterespionage division responsible for tracking lobbying by foreign governments.

Manafort and Gates have previously said they were not doing work that required them to register. Manafort also said in a statement earlier this week that he never performed work for the Russian or Ukrainian governments. Gates previously told the AP, "At no time did our firm or members provide any direct lobbying support."

Once Trump's top strategist, Manafort's resignation came at the end of a week in which his name also was connected to the handwritten ledger describing cash payments from Ukraine's then-governing political party. The New York Times first reported the contents of the ledger.

Manafort's campaign position was a vital though unpaid role that he used to steer the campaign over the past several months. And his firm's lobbying activities carried outsized importance as Manafort and Gates played a formative role building out Trump's campaign operation after pushing out an early rival, former Trump campaign manager Corey Lewandowski.

The disclosures about their work came as Trump faced criticism for his friendly overtures to Russian President Vladimir Putin and as Trump announced that, if elected, he would ask senior officials in his administration not to accept speaking fees, for five years after leaving office, from corporations that lobby "or from any entity tied to a foreign government."

The emails do not describe details about the role of Manafort, who was Gates' boss at their firm, DMP International LLC. Current and former employees at Mercury and the Podesta Group, some of whom spoke on condition of anonymity because they are subject to non-disclosure agreements, told the AP that Manafort oversaw the lobbying efforts and spoke about them by phone.

Gates directed the Washington lobbying firms to set up meetings between a top Ukrainian official and senators and congressmen on influential committees involving Ukrainian interests. Gates noted in the emails that the official, Ukraine's foreign minister, did not want to use his own embassy in the United States to help coordinate the visits.

Gates also directed the firms to gather information in the U.S. on a rival lobbying operation, including a review of its public lobbying disclosures, to determine who was behind that effort, the emails show.

The lobbying also included attempts to gain positive press coverage of Ukrainian officials and efforts to undercut sympathy for Yulia Tymoshenko, an imprisoned rival of then-President Viktor Yanukovych. The Ukrainian leader eventually fled the country in February 2014 during a popular revolt prompted in part by his government's crackdown on protesters and close ties to Russia.

Manafort and Gates have said that they did not disclose their activities to the Justice Department because they did not oversee lobbying efforts and merely introduced the Washington firms to the European Centre, which they said ran the project. The center paid Mercury and the Podesta Group at least $2.2 million over roughly two years.

The emails appear to contradict the assertion that the nonprofit's lobbying campaign operated independently from Manafort's firm.

"There is no question that Gates and Manafort should have registered along with the lobbying firms," said Joseph Sandler of Sandler Reiff Lamb Rosenstein & Birkenstock, a Democratic-leaning Washington law firm that advises Republican and Democratic lobbyists.