New Hires at the RNC Ready to Court the Black Vote 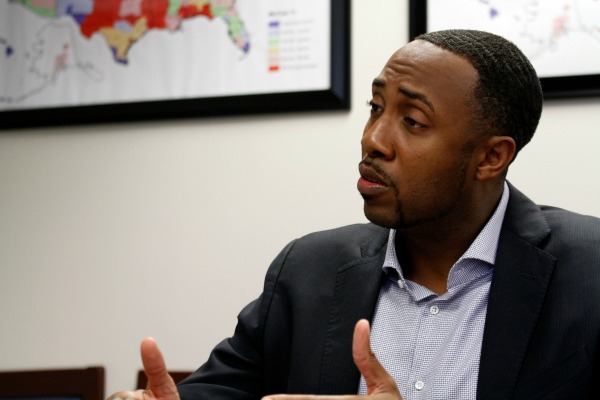 Due to unprecedented poor polling numbers in the African American community, Republicans have ramped up their effort to court Black voters.

The party has hired four new Black staff members in a move that they hope will not only help GOP Presidential nominee Donald Trump in the general election this November, but that will also bolster the party’s long-term efforts to gain support among African Americans, a voting bloc that for decades has mostly voted for Democrats.

The new staff members are Ashley Bell, who helped to launch the 20/20 Leaders of America, a bipartisan group of African American elected officials and community activists; Shannon Reeves, a professor of political science at Alabama A & M University and former national director of state and local development for the RNC; Elroy Sailor, the founder and CEO of the J.C. Watts Companies; and Georgia State University senior Leah LeVell, whose father Bruce LeVell is the chairman of the National Diversity Coalition for Trump.

Two of the new hires, Bell and Sailor, spoke at length with the NNPA News Wire, expressing optimism that they can help turnaround the record low polling numbers that show Trump currently receiving just one percent of the Black vote.

They also spelled out their mission to court students at historically Black college and universities – HBCUs – and their ideas for criminal justice reform.

“HBCUs are a very big focus of ours and part of our job is to make sure we engage HBCUs,” said Bell. “We don’t have a lot of time, but HBCUs can help get the economy to where it needs to be and we recognize that.”

They also recognize that criminal justice reform is a critical issue in for the Black community.

The solution, Bell said, is the creation of more entrepreneurs in the Black community and improving the capital gains tax which would allow these entrepreneurs to perform activities like buying houses to fix up and resell for profit.

Bell noted that Congress has put forward a number of compelling ideas, like economic empowerment zones and transforming education to create a marketplace where schools have to compete for students.

“I think the economic ideas and education opportunities [put forth by the GOP] are very specific to the Black community,” said Bell. “It’s been eight years since a Republican was in the [White House]…we have to make sure that the Black vote is competitively fought for.”

Sailor said it’s important to remember that no party has exclusivity on having 100 percent of the best models for America.

“I’ve been a Republican for over 25 years and I have seen the end results of some very good policies and new models that have proven successful in terms of creating opportunities and solving old problems in our community,” he said. “For example, former Congressman J.C. Watts authored the American Community Renewal and New Markets Act, which was signed into law by President Clinton. This legislation helped to empower faith-based organizations, and spur development in our communities.”

Among the new team’s assignments, Bell will serve as Senior Strategist and National Director of African American Political Engagement and focus on winning elections for 2016. Reeves will serve as Senior Advisor to the RNC’s Political Department and will focus on the X’s and O’s of politics – the data, and voter identification. Sailor has the job of Senior Advisor to the Chairman and will focus on infrastructure, institutional growth and sustainability.

“America has the greatest two party political system in the world, but I believe the best outcome for our community is to ultimately be in a position where both parties feel compelled to compete for our vote,” Sailor said, before quoting Congressman William L. Clay of Missouri who said: “We should not have permanent friends, nor permanent enemies we should have permanent interest.”

Thus, politicians should not lead individuals to believe they create jobs because they can only produce policies that create an environment for business owners and investors to come into a community and create a job, Sailor said.

“Republicans have proposed a series of tax and investment policies that create a favorable environment for investors such as reducing the capital gains taxes, reducing the burdensome and costly licensing process for small businesses, providing local municipalities the option to waive certain land use restrictions resulting from federal land designations and allowing all small and medium-sized businesses to fully deduct most investments in the first year of purchase,” Sailor said. “Such provisions will incentivize businesses to increase investment in equipment and machinery that will increase productivity.”

With the addition of Bell, Sailor and the others, the GOP shows it’s “the party that promotes new models to solve old problems,” RNC Chairman Reince Priebus said in a statement.

While Democratic Presidential nominee Hillary Clinton has pledged to engage the Black community in part by placing ads in African-American-owned newspapers, the GOP hasn’t made the same promise.

Bell and Sailor both deflected the question about whether or not the RNC will engage the Black community by advertising in Black-owned media, even though more than 80 percent of Blacks believe that messages that they read and hear about in Black media are more relevant to them, according to Nielsen’s 2012 report on African American consumers. Sean Spicer, the chief strategist and communications director for the RNC, didn’t respond to an e-mail request to comment on the issue.

Asked why Blacks should vote Republican this fall, both Sailor and Bell had quick responses.

“We are conservative and we want to make sure African Americans understand what the conservative issues are that we face,” Bell said.

Sailor continued: “So I think if Republicans operate like that type of pastor and focus on those things then I believe African-American voters are sophisticated enough to make a political decision that best fits our interest.”