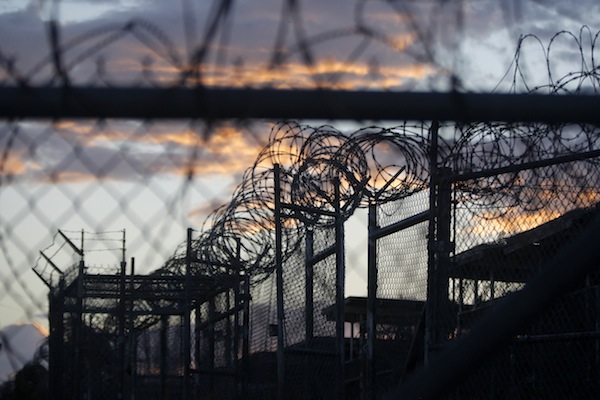 WASHINGTON (AP) — A new report on Guantanamo detainees tells the stories of former al-Qaida bomb makers and bodyguards as well as low-level militant cooks and medics who have been transferred or cleared for release — despite fears they are at risk of returning to battle.

Many of the detainees have been held without charge for more than 14 years at the military prison President Barack Obama wants to close.

The Pentagon gave the unclassified report to Sen. Kelly Ayotte, R-N.H., who has been pushing the Obama administration for years to be more transparent about who is being transferred out of the prison at Guantanamo Bay, Cuba. She shared it with The Associated Press and posted it online Wednesday. See the report (pdf)

"By clearly detailing some of the disturbing terrorist activities and affiliations of detainees at Guantanamo, the report demonstrates why these terrorists should not be released — they pose a serious risk to our national security," Ayotte said in an email response to questions.

The remaining detainees "will no doubt" return to the fight once released, she said, noting that the Defense Department told her that 93 percent of the detainees still at Guantanamo as of late last year were high risk for re-engagement in terrorism.

The report tells the story of detainees like Karim Bostan, who once ran a flower shop and later was accused of running an al-Qaida-affiliated explosives cell believed to have targeted U.S.-led coalition forces in eastern Afghanistan. He's been at Guantanamo for more than 13 years, but has been cleared for transfer to a country willing to accept him.

It also, however, tells the story of Muhammad Said Salim Bin Salman, a Yemeni who traveled to Afghanistan to train at an al-Qaida camp. He says he became a cook and never fought because he suffers from back pain. Deemed a medium intelligence risk, he was cleared for release and transferred to Oman in January following 14 years of detention.

"Holding the men at all was a deep injustice and a lasting stain on the U.S. These men shouldn't have been in Guantanamo in the first place," Remes said. "It's one thing to prosecute detainees for attacks on the U.S. ... It is quite another thing — and contrary to the values the U.S. says it is committed to — to hold men for many years, who are accused of no crime."

The Office of the Director of National Intelligence reports that 5 percent of Guantanamo prisoners released since Obama took office have re-engaged in militant activities and another 8 percent are suspected of doing so. That compares with 21 percent confirmed and 14 percent suspected during the Bush administration.

Opened in January 2002, the prison once held about 770 detainees. Bush transferred more than 500 and, so far, Obama has transferred 162 detainees to other countries.

The report given to Ayotte covers 107 detainees who were at the prison as of Nov. 25, 2015, the day Obama signed the 2016 defense policy bill, which required the administration to provide more information to Congress about the detainees. The population has been whittled to 76 today.

Republican lawmakers accuse Obama of rushing to downgrade detainees' threat status to clear them for transfer so he can make good on his campaign pledge to close the prison before he leaves office in January. Myles Caggins III, a spokesman for the National Security Council at the White House, declined to predict whether Obama will achieve his goal, but said the U.S. continues to work with countries willing to receive the 34 detainees — nearly half the remaining prison population — who have been cleared for transfer.

The GOP-led Congress has tried to slow or stop detainees from being transferred out and has banned any from being moved to U.S. prisons.

The dispute between the White House and Republicans in Congress got especially heated this spring when Paul Lewis, the Pentagon's special envoy for closing Guantanamo, told a congressional committee that Americans have been killed by detainees released from Guantanamo. Lewis did not say how many or offer any other details.

Amid the debate, Ayotte has been working for months to get the Pentagon to provide Congress more information. The Pentagon had until Jan. 24 to send a report to Congress. Defense officials missed that deadline and, in response, Ayotte on March 16 blocked a nomination vote on the Defense Department's pick for general counsel.

The Pentagon submitted a report to congressional defense committees on April 8, but Ayotte wasn't satisfied, saying that much of the substantive information about the detainees ended up in a classified annex that could not be shared with the public. She only released her hold on the nominee when this separate, unclassified report was delivered to her office on June 13.

While some unclassified information about Guantanamo detainees can be found in hundreds of government documents, news stories, court files and detainee threat assessments leaked by WikiLeaks, the Pentagon has never compiled it in a single, unclassified report for lawmakers, or the public, to peruse.