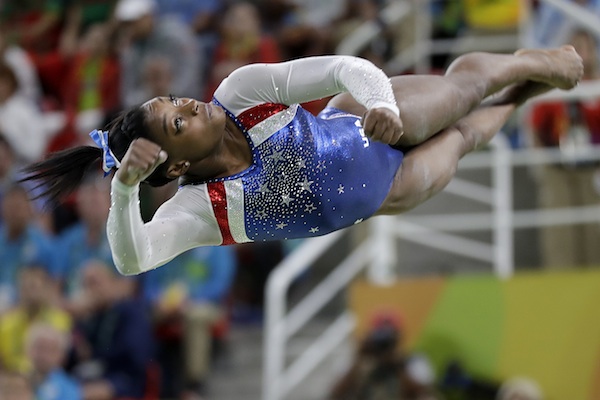 Does she really even need a vault to fly sky-high?

Olympic all-around champion Simone Biles goes for her third gold in Rio de Janeiro when she competes in the women's vault final Sunday. But the 19-year-old American already proved she can soar with astonishing tumbling routines that won the all-around title. Biles can leap twice her own height.

On the men's side, British teammates Louis Smith and Max Whitlock square off in the pommel horse final, along with American Alex Naddour and Ukrainian Oleg Verniaiev.

Britain's Andy Murray is going to see if he can turn his trademark menacing grimace into a smile.

The defending champion, who is trying to become the first player to win two Olympic singles golds, faces Juan Martin del Potro of Argentina in the men's final Sunday in Rio de Janeiro.

Murray is going to have to work extra hard, though, because del Potro is on a roll, having ousted both the top player in the world, Novak Djokovic of Serbia, and No. 5 Rafael Nadal of Spain at the Olympic tournament. Nadal plays Japan's Nishikori Kei for the bronze.

The women's doubles gold will either go to Martina Hingis and Timea Bacsinszky of Switzerland or Ekaterina Makarova and Elena Vesnina of Russia.

Even when he is tripped and falls, he wins an Olympic gold medal.

Nothing, it seems, can stop Britain's Mo Farah over 10,000 meters in a major championship.

Not his training partner clipping his heel in the Olympic final Saturday in Rio de Janeiro. Not three of Kenya's best trying to wear him down with repeated spurts of acceleration. Not the final kick of rival Paul Tanui.

The Somali-born British runner now has three Olympic gold medals and will defend his Olympic 5,000 title later this week, trying to become the first man to win back-to-back Olympic long-distance doubles since the 1970s.

Farah says "I'd promised my older daughter Rihanna I was going to get a medal for her and in my mind I was thinking I can't let her down."

While Olympic athletes were getting some well-deserved rest, Olympic officials are racing through the night to drain the murky green water out of a pool at the troubled Maria Lenk Aquatics Center.

The goal is to pump in nearly 1 million gallons of clean water before the synchronized swimming competition takes place Sunday — and even if everything goes right, they will finish barely four hours before it begins.

Rio Olympics spokesman Mario Andrada says the "radical measure" was necessary to ensure clear water for both judges and competitors, since synchronized swimmers spend much of their time underwater. He stressed again the water posed no health risks.

Andrada says "we could have done better in fixing it quickly. We learned a painful lesson the hard way."

An adjacent smaller pool will still be used for the divers, even though it remains murky. American diver Abby Johnston has dubbed it "the swamp."

In the end, this is the way he wanted to go.

Standing atop the Olympic medal podium for the 23rd time, Michael Phelps teared up and bit his lip.

"It turned out pretty cool," Phelps said, another gold medal around his neck. "It's just a perfect way to finish."

Phelps, who says he really is retiring this time, put the United States ahead to stay Saturday on the butterfly leg of the 4x100-meter medley relay, giving the most decorated athlete in Olympic history his 23rd gold medal.

To put this in perspective, no other Olympian has more than nine golds. With 28 medals in all, Phelps is 10 clear of anyone else.

"It's not even once in a generation," said his coach, Bob Bowman. "It might be once in 10 generations that someone like Michael Phelps comes along."