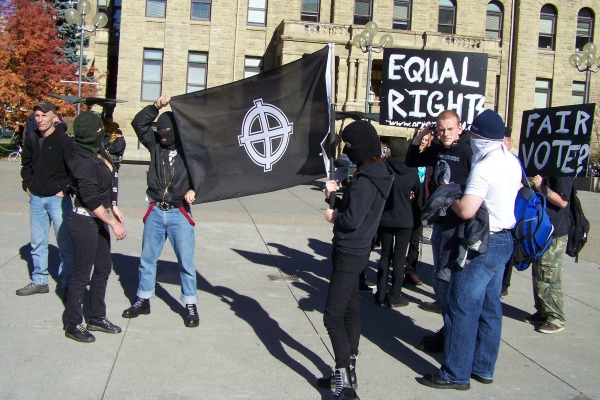 BATON ROUGE, La. (AP) — The threat of violence by people inspired by foreign extremists invokes fear in a majority of young Americans across racial groups. But for young people of color, particularly African-Americans, that fear is matched or surpassed by worries about violence from white extremists.

A new GenForward poll of Americans age 18-30 shows widespread anxiety among young people about attacks from both inside and outside the United States.

Sixty-two percent of young African-Americans and 55 percent of Hispanics surveyed said they were very concerned about the threat of violence committed by white extremists, compared to one-third of whites and 41 percent of Asian-Americans. 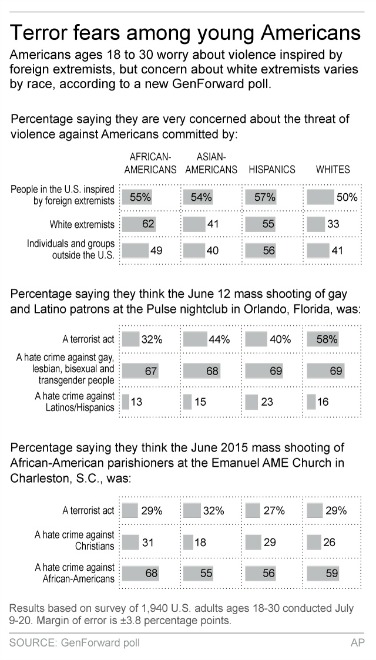 GenForward is a survey by the Black Youth Project at the University of Chicago with the Associated Press-NORC Center for Public Affairs Research. The poll is designed to pay special attention to the voices of young adults of color, highlighting how race and ethnicity shape the opinions of a new generation.

Gregg Higgins, 27, was one of the whites who said he was very worried about violence by extremists in his own race. In fact, he said he was more concerned about "the homegrown white extremists" than the threat of violence from people outside the United States or people inspired by foreign extremists.

A social worker in Pittsburgh, Higgins said the growing political tension during the current election cycle has "shown a really ugly part of our past coming through and being more heard." He described it as "white males who are angry and who aren't now afraid to show that anger."

"That fear of loss of control and loss of privilege is what's inspiring this vitriol and this hate," Higgins said.

Worry about attacks from people currently living in the U.S. who are motivated by foreign extremists spreads more evenly across racial groups, with at least half of whites, blacks, Asians and Hispanics describing themselves as very concerned about that threat.

Violence committed by people from outside the country also caused unease, especially among Hispanic young adults. Fifty-six percent of Hispanics polled said they were very concerned, compared to 49 percent of African-Americans, 40 percent of Asian-Americans and 41 percent of whites.

The angst comes after a spate of mass shootings. Nine black people were shot and killed last year at a church in Charleston, South Carolina, by a white man who officials say talked of starting a race war. In June, a gunman born in the U.S. to Afghan immigrants opened fire in a crowded gay dance club in Orlando, Florida, killing 49 people in the worst mass shooting in U.S. history. An autopsy report identified him as a white male.

Darsi Vazquez, a 25-year-old Hispanic college student from Huntsville, Alabama, described herself as very concerned about the threat of violence from foreign and domestic extremists alike, but she thinks the fear is exacerbated by news coverage of mass shootings around the country and the types of overt racism that appear in social media.

"A few years back technology wasn't where it's at it now, so you couldn't see things like this happening like you see it now," Vazquez said. "I don't know if it's necessarily getting worse, but we're seeing it more now. We don't just see what's happening outside our window, we also see what's going on outside other people's window."

Most young adults in the poll labeled as hate crimes both the shooting deaths at the Charleston church and the Orlando night club, against African-Americans and against LGBT people, respectively.

But the poll shows people view the Orlando shooting differently, depending on their race.

Among young whites, most also described the Orlando shooting as a terrorist attack. Fifty-eight percent of whites considered it that, compared to only 32 percent of African-Americans, 40 percent of Hispanics and 44 percent of Asian-Americans. Gunman Omar Mateen pledged allegiance to the Islamic State group during a call with police dispatchers during a standoff before he was shot and killed.

A third or less of young people of each racial and ethnic group called the Charleston attack terrorism.

Terrorism concerns have young Americans across racial groups largely in agreement that some rights and freedoms should be sacrificed in efforts to prevent an attack. Eleven percent of all young adults polled said they believe such sacrifices are always necessary, while 54 percent said they're at least sometimes necessary.

But most young people said Republican presidential candidate Donald Trump's calls to temporarily ban Muslims from coming to the U.S. goes too far.

More than two-thirds of those surveyed said they oppose a temporary prohibition on any Muslim who isn't a U.S. citizen from entering the country: 64 percent of whites, 66 percent of Hispanics and 79 percent of African-Americans and Asian-Americans.

The poll of 1,940 adults age 18-30 was conducted July 9-20 using a sample drawn from the probability-based GenForward panel, which is designed to be representative of the U.S. young adult population. The margin of sampling error for all respondents is plus or minus 3.8 percentage points.

The survey was paid for by the Black Youth Project at the University of Chicago using grants from the John D. and Catherine T. MacArthur Foundation and the Ford Foundation.