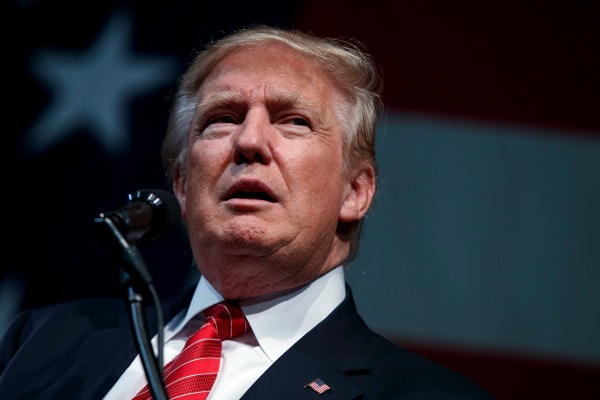 BRISTOL, Va. (AP) — On the defensive once again, Donald Trump is blaming faulty interpretations and media bias for an uproar over his comments about the Second Amendment. He's insisting he never advocated violence against Hillary Clinton, even as undeterred Democrats pile on.

The latest controversy to strike Trump's campaign arose, as they often do, out of an offhand quip at a boisterous campaign rally. Claiming falsely that Clinton wants to revoke the right to gun ownership guaranteed in the Constitution's Second Amendment, Trump said there would be "nothing you can do," if she's elected, to stop her from stacking the Supreme Court with anti-gun justices.

Then he added ambiguously: "Although the Second Amendment people, maybe there is — I don't know. But I'll tell you what: that will be a horrible day."

Was Trump suggesting gun owners take matters into their own hands if Clinton wins the White House? Or was he merely musing about the indisputably powerful influence of the gun lobby?

Like so many times before, Trump's supporters and opponents construed his comments in entirely different ways.

"Give me a break," Trump said hours later, insisting he was referring to the power that voters hold. He told Fox News that "there can be no other interpretation."

But Democrats saw — and seized — an opportunity to reinforce the perception that Trump can't moderate the things that come out of his mouth, much less the decisions he'd make as president.

"I really, frankly couldn't believe he said it," said Tim Kaine, the Democratic vice presidential nominee. "Nobody who is seeking a leadership position, especially the presidency, the leadership of the country, should do anything to countenance violence, and that's what he was saying."

By Tuesday evening, Clinton's campaign was fundraising off the firestorm, asking supporters by email to chip in $1 to "show that we don't tolerate this kind of politics in America." Trump's team, too, was using the controversy to reinforce a theme it's been pitching to voters: that an underdog Trump is being unfairly treated by the media.

"They will buy any line, any distortion, and spin that the Clintons put out," said former New York Mayor Rudy Giuliani, an ardent Trump supporter.

But House Speaker Paul Ryan, who was celebrating a primary victory in Wisconsin Tuesday night, said: "It sounds like just a joke gone bad. I hope they clear this up very quickly. You never joke about something like that."

The controversy immediately overwhelmed Trump's intended campaign-trail focus: the economic plan he unveiled just a day earlier and was promoting during rallies in the most competitive election states. It also underscored the concern, voiced by many worried Republicans, that he cannot stay disciplined and avoid inflammatory remarks that imperil not only his White House prospects but the re-election chances of many Republican lawmakers.

For Trump, the next opportunity to shift themes was to come Wednesday when he holds a pair of rallies in Abington, Virginia, and in Fort Lauderdale, Florida. Clinton, fresh off her own campaign swing in Florida, planned to spend the day in the battleground state of Iowa, where she will tour a Des Moines T-shirt shop and hold a rally.

It wasn't immediately clear whether Trump's latest stumble would continue to dog him or whether, like many in the past, it would quickly fade away. In Ohio, a competitive state coveted by both candidates, Trump's comments struck some of those questioned in a focus group of voters the wrong way.

"Maybe I'm hearing it wrong, but sounds like he's basically saying take her out," said Julie B, an office administrator and married mother of two who was identified only by her first name and last initial.

Trump's perceived violation of political norms — candidates don't typically call for physically hurting opponents — was all the more striking because the position he was criticizing isn't one that Clinton holds. Contrary to Trump's remarks, Clinton has made support for the Second Amendment a key piece of her usual campaign speech, though she supports stricter gun control measures.

"I'm not here to take away your guns," she said in her Democratic National Convention speech. "I just don't want you to be shot by someone who shouldn't have a gun in the first place."

Trump did try to put one other simmering dispute to rest — at least temporarily. A day after Clinton committed to participating in all three scheduled debates, Trump said he, too, would do three debates, though he seemed to leave himself an out. Trump has complained previously that two debates are scheduled during NFL football games.

"I will absolutely do three debates," Trump told Time magazine. But, he added, "I have to see the conditions."