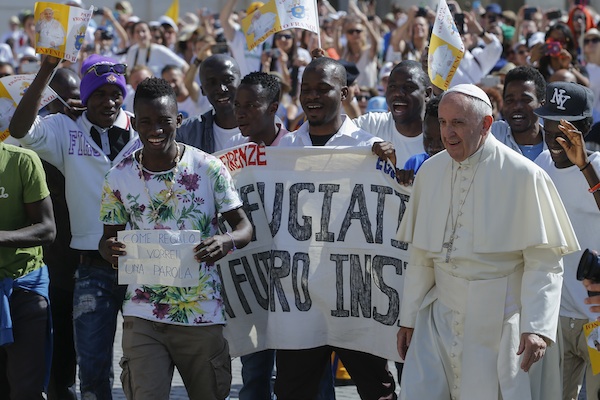 ABOARD THE PAPAL PLANE (AP) — Pope Francis says he won't describe Islam as "terrorist" since that's "not fair and not true."

Francis was asked Sunday why he never uses the word "Islam" when denouncing extremists' killings like that of an elderly French priest during Mass in France last week.

He was speaking to reporters aboard the papal plane back to Rome after a five-day pilgrimage in southern Poland. While there he prayed privately in a church that God protect people from the "devastating wave" of terrorism in many part of the world.

Francis said he thinks "it's not right to identify Islam with violence."

He added that every religion has its "little group of fundamentalists." He said that if he speaks of violent Islam, he'd have to speak of violent Catholicism, since Catholics kill, too.

ABOARD THE PAPAL PLANE (AP) — Pope Francis told reporters Sunday he won't address child molestation allegations against a top Vatican cardinal who is one of his most-trusted aides until justice officials in Australia have made a determination.

Francis said as far as he's concerned, accusations against Cardinal George Pell, Francis' top financial adviser, "are in the hands of justice." He said that the accused deserved the benefit of the doubt, adding that "once justice has its say, I will speak."

"You can't judge before they decide. We must wait for justice and not make judgments ahead of time," the pope said. He was responding to a question posed by an AP reporter aboard the papal plane on a late evening flight to Rome after a pilgrimage in Poland about what would be the right thing to do in the Pell case.

Pell has long been dogged by allegations of mishandling cases of abusive clergy when he was archbishop of Melbourne and later Sydney. More recently, the prelate has been accused of child abuse himself when he was a young priest. Two men, now in their 40s, said he touched them inappropriately under the guise of play at a swimming pool during the late 1970s, according to Australian media, which reported the men have given statements to Victoria police.

Separately, a businessman this week told Australia's public broadcaster, ABC television, that he saw the cardinal exposing himself to three young boys in a surf club changing room in the late 1980s. Pell was at the time a senior priest in Melbourne.

Pell, 74, has denied any inappropriate behavior.

Francis cautioned against what he called doing "justice by gossip" concerning the allegations against Pell.

In a long-distance video hookup from Rome, the cardinal testified in February about clerical sex abuse, telling an Australian inquiry that he should have done more when a boy raised abuse allegations against a cleric in the 1970s.

Pell told the commission that the church had "mucked things up and let people down" and for too long had dismissed credible abuse allegations "in absolutely scandalous circumstances."

But he also acknowledged that he too had made mistakes in often believing the priests over victims who alleged abuse.

"I must say in those days, if a priest denied such activity, I was very strongly inclined to accept the denial," he said.

Pell led the Australian church until Pope Francis named him the Vatican's top finance manager in 2014.