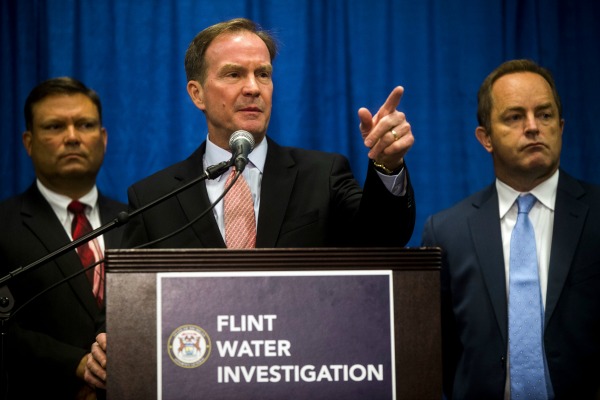 FLINT, Mich. (AP) — Six current or former state employees were charged Friday with misconduct and other crimes in the Flint water crisis, bringing to nine the number of public officials facing prosecution over the lead contamination that alarmed parents across the country.

Attorney General Bill Schuette filed a total of 18 new charges against three employees from the Department of Environmental Quality — Liane Shekter Smith, Adam Rosenthal and Patrick Cook — and three from the Department of Health and Human Services — Nancy Peeler, Corinne Miller and Robert Scott. In addition to the misconduct in office charges, there were willful neglect of duty and various conspiracy counts.

"Each attempted to bury or cover up, downplay or hide info that contradicted their own narrative, their story ... (that) there's nothing wrong with Flint water, it's perfectly safe to use. In essence, these individuals concealed the truth and they were criminally wrong to do so," Schuette said at a news conference in the poor, predominantly black city of nearly 100,000 people 55 miles north of Detroit.

Under the leadership of a state-appointed emergency manager, officials in April 2014 began using the Flint River as Flint's water supply. State officials did not require that the river water be treated for corrosion, and lead from aging pipes and fixtures leached into Flint homes and businesses. The city remained on that water supply for 18 months, despite complaints from residents.

Elevated levels of the toxin were discovered in children. Lead contamination has been linked to learning disabilities and other problems.

Shekter Smith, former head of the state's drinking water office, appeared last month in a Detroit courtroom so her lawyer could assert her constitutional right against self-incrimination amid ongoing investigations. She hadn't yet been charged but was reassigned after the water crisis came to light and her firing was announced in February.

Shekter Smith's attorney, Brian Morley, said Friday that he was surprised she was charged.

"It's disappointing. ... I think we're going to be really hard-pressed to find that she did anything wrong, and certainly nothing criminally wrong," he said.

Neither Cook, Rosenthal nor Peeler immediately responded to phone messages seeking comment. A listed number for Scott couldn't be found and Miller's attorney, Kristen Guinn, declined to discuss the case.

It's the second round of charges stemming from the water crisis. In January, Schuette announced the appointment of a special counsel to help his office investigate whether laws were broken. In April, two state regulators and a city employee were charged with official misconduct, evidence-tampering and other offenses. At the time, the Republican attorney general guaranteed others would also be charged.

Flint utilities administrator Mike Glasgow struck a deal with prosecutors in May, pledging cooperation in exchange for reduced charges as authorities continue investigating lead contamination of the city's drinking water supply. He entered a no contest plea to one count of willful neglect of duty, a misdemeanor, in exchange for dismissal of a felony charge of tampering with evidence.

In June, Schuette filed a lawsuit against two water engineering companies, saying their negligence caused and exacerbated Flint's lead-tainted water crisis and demanding what could total hundreds of millions of dollars in damages.

Schuette and Andy Arena, the lead investigator who once led Detroit's FBI office, say nobody is off-limits from investigation or prosecution.

"You don't start at the top," Arena said. "We're starting to work our way up, and expanding our investigation. ... The scope of the investigation is progressing exactly how it should be."

The public health emergency was preceded by E. coli detections; resident complaints about color, odor and taste; and high levels of a disinfectant byproduct. A General Motors plant had stopped using the water just six months after the 2014 switch because it was rusting engine parts, and experts suspect a deadly Legionnaires' disease outbreak was tied to the water.

Gov. Rick Snyder has apologized for regulatory failures, and the state environmental agency has said it wasn't required to add an anti-corrosion chemical until after a year of testing.

In March, a state task force that investigated the Flint crisis concluded that it was a "case of environmental injustice." The Michigan Civil Rights Commission is holding public hearings on the matter.

Federal experts now say filtered tap water is safe for everyone to drink in Flint, though some doctors still are recommending bottled water for pregnant women and children ages 5 and younger.