Civil-Rights Marchers Call for US to Deal With Inequality 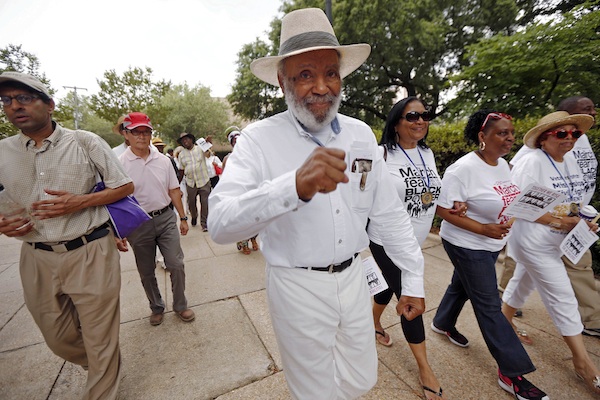 JACKSON, Miss. (AP) — A half-century ago, thousands joined a march across Mississippi to challenge a system that condoned violence against black people and suppressed their rights — issues still reverberating in today's national debates about police violence.

The March Against Fear in the summer of 1966 helped many find a voice to protest the injustices of the day, setting an example for contemporary movements such as Black Lives Matter.

The link between past and present was on the minds of participants in the march 50 years ago who recently told their stories to The Associated Press.

They say recent deadly encounters involving police show that Americans need to engage in honest dialogue about race — even if it's uncomfortable for some people to acknowledge that black lives have long been devalued. They also lamented what they see as a lack of progress on many fronts.

"Literally nothing has changed," says James Meredith, who launched the march. "That is not completely true. What has changed the so-called civil rights movement is completely at an end. It is over.... That's why we have the crisis we have in the nation today."

While Meredith declined to discuss specifics of the recent violence — which has included fatal shootings of black men by police and deadly attacks on officers — he and his contemporaries say much work still needs to be done.

The march started as a one-man journey by Meredith, four years after he integrated the University of Mississippi amid violent backlash. In June 1966, he wanted to show that a black man could walk through Mississippi without fear. He set out to walk more than 200 miles from Memphis, Tennessee, to the Mississippi capital of Jackson.

But one day in, a white man shot and wounded Meredith. Activists including the Rev. Martin Luther King took up his cause and eventually rallied thousands of marchers.

Now 83, Meredith wants the black community to embrace education and mentorship as ways to "pay God back."

"Citizenship is what the March Against Fear was about," he says. "Citizenship. Not only rights and privileges are part of citizenship. Duty and responsibility are an equal part, and that's the part the black race has failed to pay any attention to."

The photo below shows civil rights activists led by Dr. Martin Luther King stretch out along Highway 51 south near Senatobia, Miss., on a march to the capital, Jackson, started by James Meredith in June 1966. The March Against Fear helped many find a voice to protest the injustices of the day. (AP Photo) 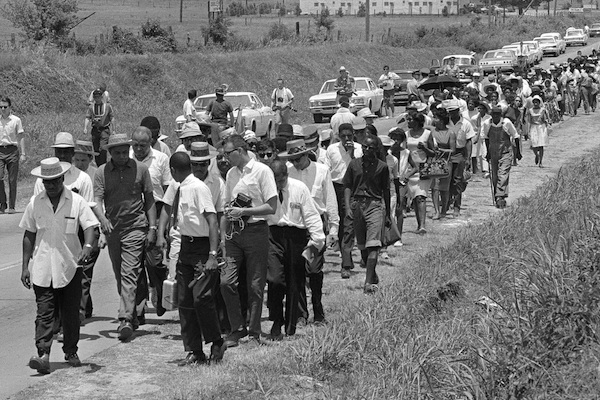 Dianna Freelon-Foster is blunt in her assessment of America.

"I see this country as a violent country.... We shirk talking about it," says Freelon-Foster, who was 15 when the marchers passed through her hometown of Grenada.

She says their courage gave locals the confidence to challenge segregation.

"It opened something up for my elders," Freelon-Foster says.

She and other black students integrated Grenada schools the following fall, and they were beaten by white men wielding baseball bats and tree limbs.

A generation later, in 2004, Freelon-Foster was elected mayor of Grenada — a post she held for one year.

She says police aren't bad people, but many can't relate to the communities they patrol.

Marcher Flonzie BrownWright's own grandson was fatally shot by deputies in Los Angeles in 1999.

Dion Goodloe, 19, was home in a wheelchair with a broken leg when officers came to investigate a report of trouble at a nearby store, says BrownWright. She was told that her grandson was sitting on his hands and that officers thought he was hiding a gun. A sheriff's spokesman said at the time that he had a gun and pointed it at deputies.

"Whatever the reason was, it did not justify them shooting a kid sitting in a wheelchair who could not walk," she says.

Still, she condemns any violence — whether by police or against them.

"The Bible tells us ... you don't have a right to take another person's life. That works on all sides," BrownWright says.

Back in 1966, she was an NAACP volunteer in Canton who received a phone call from King asking if she could provide food and housing for 3,000 marchers. Without hesitation, she said yes. The marchers slept in homes, on porches and in cars. Some slept in a gymnasium.

BrownWright says King talked about receiving threats, and he exhorted her and others to "do what you can do to continue the struggle."

The Rev. Ed King was an anomaly — a white chaplain at a historically black private college that was a safe haven for civil rights activists. He was also active in the Mississippi Freedom Democratic Party, which challenged the state's 1960s white establishment.

After a recent Tougaloo College commemoration of the march, he said people need to continue challenging injustice.

"You have to be able to say, 'As an American, I have a right to ask these questions, to say that things aren't perfect," King says. "We're moving into a mood of despair now, and with despair you look for scapegoats to blame."

He says poverty's effects are insidious, such as the shortage of books in homes of children attending the Head Start preschool program. Factors like that, he says, help perpetuate inequality.

Paris was a 21-year-old student in Alabama when he drove to Mississippi to join the march. Along the final stretch, it was his job to persuade black spectators to participate.

"Man, that was just a day of jubilee for us, because here we were marching basically with much less fear than we had ever had before," he says.

Still, he recalls a tense moment when he encountered an officer. It was less than two years after the Bloody Sunday march in Alabama where police attacked civil rights marchers.

"The first time I ever looked a policeman face-to-face was on that Meredith march," Paris recalled. "I looked him straight in the eyes and said, 'You've got to be careful today how you treat us, because we're not taking this foolishness that we've been taking before.'"

Frank Figgers was 16 when he and several friends joined thousands of others in Jackson the final day of the march. He says he didn't listen to the speeches because he was so caught up in seeing black and white people together, standing up to Highway Patrol officers who surrounded the Capitol as if protecting a fortress: "It was something energizing about the crowd."

He says the work of the civil rights movement remains unfinished, with poorly funded public schools and weak labor unions in much of the South.

He sees today's Black Lives Matter activists displaying the same kind of righteous energy that young people had 50 years ago: "It is a blossoming now of stuff that was planted then."