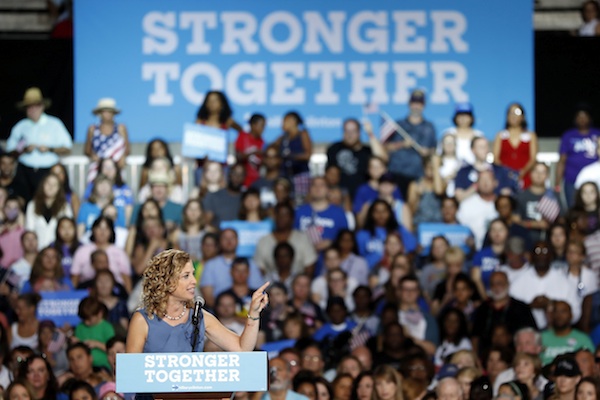 WASHINGTON (AP) — The Latest on the 2016 presidential race (all times EDT):
4:30 p.m.
Hillary Clinton is thanking her "longtime friend" Debbie Wasserman Schultz after the Florida congresswoman's decision to step down as chair of the Democratic National Committee.

Clinton says that Wasserman Schultz will serve as honorary chair of her campaign's 50-state program to help elect Democrats around the country.

The presumptive Democratic presidential nominee says she looks forward to campaigning with Wasserman Schultz in Florida "and helping her re-election bid."

Clinton responded after Wasserman Schultz agreed to step down as chair at the end of this week's Democratic National Convention.

The move came after the publication last week of some 19,000 hacked emails, some of which suggested the DNC was favoring Clinton during the primary season.

President Barack Obama says he is "grateful" for Debbie Wasserman Schultz's leadership at the Democratic National Committee. Obama says in a statement that the Florida congresswoman has "had my back," particularly during his 2012 re-election campaign. He says she played a critical role in supporting the nation's economic recovery and his effort to overhaul the nation's health care system. He adds that no one works harder for their constituents.

Wasserman Schultz announced Sunday that she will resign as party chairwoman at the end of this week's Democratic convention. The four-day convention kicks off Monday in Philadelphia.

Debbie Wasserman Schultz says she is stepping down as Democratic Party chairwoman at the end of this week's convention.

The Florida congresswoman has been under fire following the publication of hacked emails suggesting the Democratic National Committee favored Hillary Clinton in the presidential primaries.

In a statement, Wasserman Schultz says she still plans to fulfill her duties formally opening and closing the convention in Philadelphia. She also says she will speak at the four-day gathering.

That's according to a person familiar with the discussions, who spoke on condition of anonymity because they were not authorized to discuss the matter publicly.

The Sunday afternoon discussions come one day before Democrats open their convention in Philadelphia to nominate Hillary Clinton as the party's presidential candidate.

The discussions were prompted in part by the publication last week of some 19,000 hacked emails, some of which suggested the DNC was favoring Clinton during the primary season.

Sanders was critical of the Florida congresswoman throughout the primary, accusing the party of rigging the process in favor of Clinton.

Barney Frank, co-chair of the rules committee at the Democratic National Convention, says it was never expected that Rep. Debbie Wasserman Schultz would preside over convention proceedings this week.

Wasserman Schultz, chairwoman of the Democratic National Committee, is under fire after the leak of embarrassing emails that indicate some high-ranking party officials favored Hillary Clinton to Bernie Sanders to become the nominee. The DNC voted to select Rep. Marcia Fudge to oversee the convention proceedings instead.

Frank says Fudge was on the list to be convention chair "long before" the emails were leaked. He notes that heads of the Democratic National Committee are never picked to oversee convention proceedings.

Rep. Marcia Fudge of Ohio says she is "happy to serve" as chair of the Democratic National Convention this week in Philadelphia.

Fudge issued a statement Sunday thanking Hillary Clinton for recommending her to the position. Fudge said she is looking forward to a "great convention and our ongoing efforts as we work together for a strong party and a successful election."

Still in question is what role Democratic National Committee Chair Rep. Debbie Wasserman Schultz will play during the convention. Vermont Sen. Bernie Sanders says she should step down after some 19,000 DNC emails were leaked that suggested committee officials favored Hillary Clinton during the party's primary.

Michael Bloomberg, who was elected mayor of New York City as a Republican, will speak at the Democratic National Convention to endorse Hillary Clinton for president.

The billionaire media mogul opted against running as a third-party candidate for fear it might siphon away votes from Clinton and help elect Republican Donald Trump.
Bloomberg has been sharply critical of Trump, and in particular of his fellow New Yorker's inflammatory rhetoric on immigration.
Bloomberg had previously been a Democrat before switching his party affiliation to Republican before his successful 2001 run for mayor. Bloomberg, who served three terms, later became an independent and a leading advocate for gun control.

His endorsement was first reported Sunday by The New York Times.

A DNC rules committee member says she was voted as convention chairwoman as part of standard procedures. That makes clear that DNC Chairwoman Debbie Wasserman Schultz will not act in that capacity; under party rules, the DNC head acts as temporary chair until a new one is voted in.
Still in question is what role Wasserman Schultz might play during this week's Democratic convention. Many supporters of Bernie Sanders are angry after some 19,000 emails from the DNC were leaked that suggested committee officials favored Hillary Clinton during the party's primary.
The DNC rules committee member spoke on condition of anonymity due to the sensitivity of internal party affairs.
___
12:55 p.m.
Hillary Clinton and running mate Tim Kaine are planning a bus tour through Pennsylvania and Ohio after the Democratic National Convention.
Economic issues are the focus, with the Democratic ticket set to stop in Harrisburg and Pittsburgh in Pennsylvania, and Youngstown and Columbus in Ohio.
They'll appear at public rallies and smaller events.

12:10 p.m.
Hillary Clinton and her running mate Tim Kaine say they won't come up with an epithet for Donald Trump akin to his use of "Crooked Hillary."
In a joint interview with Kaine, Clinton told "60 Minutes Sunday" that she won't engage in "that kind of insult-fest" and that she prefers to talk about Trump's record.
Kaine, who was announced as Clinton's running mate this weekend ahead of the Democratic National Convention, said using terms like "Crooked Hillary" was beneath "the kind of dialogue we should have." He added: "Most of us stopped the name-calling thing about fifth grade."
___
11:45 a.m.
A California delegate says there are serious discussions underway to challenge Hillary Clinton's pick of Tim Kaine as her running mate.
Norman Solomon, a delegate who supports Bernie Sanders, says there is talk among Sanders' delegates of walking out during Kaine's acceptance speech or turning their backs as a show of protest.
Solomon said he believes a "vast majority" of Sanders delegates support these kinds of protests to express their dismay. Sanders' supporters say they are concerned that Kaine is not progressive enough.
___
11:15 a.m.
Tim Kaine and his wife, Anne Holton, were back at their longtime church in Richmond, Virginia, on Sunday, a day after the Virginia senator made his campaign debut with presumptive Democratic presidential nominee Hillary Clinton as her running mate.
Kaine — a former choir member at St. Elizabeth Catholic Church — sang a solo during Communion.
His wife spoke briefly at the end of the service, telling parishioners how important they've been in their lives.
She said "you have helped shape us" and that she and her husband "will really need your prayers."
Kaine told reporters outside the church: "We needed some prayers today and we got some prayers, and we got some support and it really feels good."
St. Elizabeth's is a majority black church in Richmond's Highland Park area.
___
10:15 a.m.
Bernie Sanders says he wishes Hillary Clinton had picked someone like Massachusetts Sen. Elizabeth Warren for her running mate instead of Virginia Sen. Tim Kaine.
Sanders tells NBC's "Meet the Press," that Kaine is a "very, very smart guy" and a "very nice guy" but wouldn't have been his vice presidential choice.
Sanders — who describes himself as a democratic socialist — says Kaine is more conservative than he is.
Warren is known for her fiery edges, particularly when going after Wall Street and big banks, and is a favorite of the party's liberal base.
___
9:35 a.m.
Bernie Sanders wants the head of the Democratic National Committee to step down — after leaked emails suggested the party played favorites during the presidential primary.
Here's what Sanders tells ABC's "This Week": "I'm not shocked, but I am disappointed."
Emails posted to the website Wikileaks show that at least some DNC officials were looking at ways to undercut Sanders' campaign, including questioning his religious beliefs.
Sanders says the party chairwoman, Rep., Debbie Wasserman Schultz, should resign immediately.
The Vermont senator says a new leader is needed to focus the DNC on defeating Donald Trump, attracting young voters and improving the economy.
___
9:30 a.m.
Hillary Clinton's campaign manager accuses Russia of leaking emails on purpose from the Democratic National Committee to help Republican Donald Trump in the presidential election.
Wikileaks has posted emails that including several denunciations of Clinton's primary rival, Bernie Sanders, and his supporters.
Robby Mook says on CNN's 'State of the Union" that experts are telling the campaign "Russian state actors" broke into the DNC's emails, and that other experts say these Russians are now selectively releasing the emails.
He says it's no coincidence the emails are coming out on the eve of the party's nominating convention in Philadelphia.
___
9 a.m.
President Barack Obama says Donald Trump's suggestion that the U.S. might not come to the defense of NATO allies is another sign of what he calls Trump's "lack of preparedness" on foreign policy.
Obama tells CBS' "Face the Nation" that Trump's comments amount to an admission that the U.S. "might not abide" by NATO's "most central tenet."
NATO members promise that an attack against any of them is considered an assault against all.
___
8:50 a.m.
It's become a bit easier for Hillary Clinton to formally claim the nomination at the upcoming Democratic National Convention.
The Democratic National Committee has released a slightly trimmed list of superdelegates — those are the party officials who can back any candidate.
There are now 4,763 total delegates, and 712 of them are superdelegates.
Two superdelegates left their positions in the last month, while Rep. Mark Takai of Hawaii died from cancer.
It now takes 2,382 delegates to formally clinch the nomination.
Heading into the convention, Clinton now has 2,814, when including superdelegates, according to an Associated Press count. Sanders has 1,893.
More than 50 remain uncommitted.