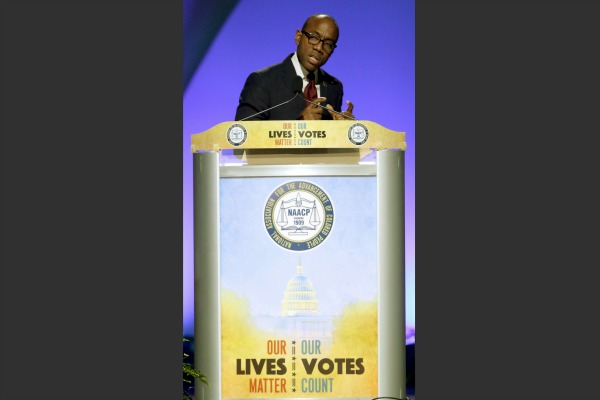 CINCINNATI (AP) — Civil rights activists frustrated by police slayings of blacks across the nation are looking to flex their voting power to push for reforms.

The continued alarm over how police treat black men has been a major focus of the five-day NAACP national convention that was wrapping up Wednesday for thousands of participants in Cincinnati. Members of the group that dates to 1909 compared the issue to the 1960s violence against civil rights demonstrators and mob hangings of blacks in earlier eras.

Cornell William Brooks, the NAACP's president, pledged in a fiery speech Monday to end "lynching in the 21st century ... practiced not with sheets and ropes but with defiled uniforms, defiled badges and defiled oaths."

The convention's theme of "Our Lives Matter, Our Votes Count" underscored goals of defending black voting rights and getting out the vote in the first presidential election since black turnout helped Barack Obama twice win the presidency. Black voters cast some 13 percent of presidential ballots in 2012, according to exit polling, and are particularly pivotal in Ohio, Florida and other swing states.

Directing his remarks to Republican Donald Trump and Democrat Hillary Clinton, Williams at one point said, "Don't think you're going to measure the (White House) drapes without us."

He called on the next president, whether Trump or Clinton, to commit to taking actions as president such as cutting off federal funding to any law enforcement agencies found to have a pattern of discrimination and increasing federal investigative powers into police agencies.

Stephan Stevens, 22, of the St. Louis area near Ferguson, Missouri, where protests broke out two years ago over the death of a black youth in a confrontation with police, urged young blacks to channel their passion politically.

"When we all come together and actually say what we feel and what we want to happen, and then we vote, then things can start to change," he said. "We have to start there, and then we can start making a change as far as police brutality."

Clinton spoke to the convention Monday and proposed national guidelines on the use of force by police, new investments in bias training, funding for body cameras, and legislation to end racial profiling.

Trump passed on an NAACP speaking invitation to focus on the Republican National Convention this week in Cleveland, but GOP rival in the presidential primaries, Gov. John Kasich, talked to the gathering Sunday evening about his own Ohio initiative on police reforms. It includes a statewide collaborative effort on police-community relations and work on policy for use of deadly force and improving data collection.

Both Clinton and Kasich condemned the slayings of police officers during the new wave of violence this month that has claimed eight officers and two civilians.

Williams opened his speech by quoting from the blog post of Baton Rouge police officer Montrell Jackson, who advised against letting "hate infect your heart" just days before the black officer was killed in Louisiana, and he said the NAACP stands "with, behind, and beside lawful law enforcement as they bring about public safety."

Ed Rollerson of Omaha, Nebraska, said the slayings of officers might bring increased attention by all Americans to police-community relations issues.

"Now it's a different ballgame," Rollerson said. "But it's sad. Any time you have someone murdered, it's sad."

For some of his other recent stories: http://bigstory.ap.org/content/dan-sewell