Tumult at GOP Convention Over Effort to Stop Trump 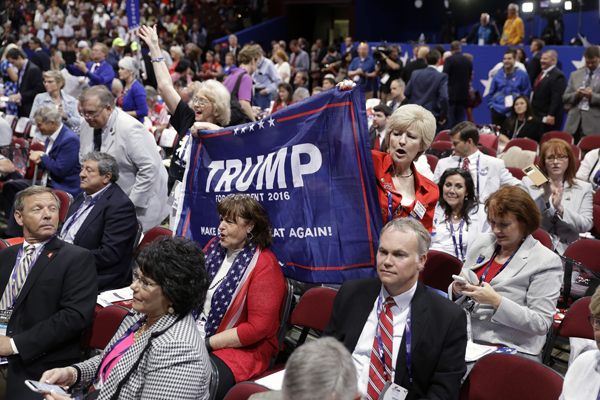 CLEVELAND (AP) — Republicans cast Donald Trump as the right man for turbulent times as they opened their presidential convention Monday against a backdrop of unsettling summer violence and persistent discontent within their own party.

The glue keeping Republicans together was disdain for Hillary Clinton. Convention speakers planned to relentlessly paint the presumptive Democratic nominee as entrenched in a system that fails to keep Americans safe.

While safety and security was the focus of Monday's opening session, Trump was also trying to shore up Republican unity, in part by assuring party leaders and voters alike that there's a kinder, gentler side to what many see as merely a brash businessman. Trump's family is playing a starring role, beginning Monday with an evening speech by his wife, Melania Trump, who has kept a low profile throughout the campaign.

In a surprise, Trump announced he would come to Cleveland and go onstage on opening night to introduce her.

The convention comes amid a wrenching period of violence and unrest, both in the United States and around the world. On the eve of the opening, three police officers were killed in Baton Rouge, Louisiana, the city where a black man was killed by police two weeks ago.

Republican National Committee Chairman Reince Priebus welcomed delegates with a brief acknowledgement of the "troubling times" swirling outside. The chairman called for a moment of silence out of respect for "genuine heroes" in law enforcement.

"Our nation grieves when we see these awful killings," he said.

In a matter of weeks, Americans have seen deadly police shootings, a shocking ambush of police in Texas and escalating racial tensions, not to mention a failed coup in Turkey and gruesome Bastille Day attack in Nice, France.

Trump has seized on the instability, casting recent events as a direct result of failed leadership by President Barack Obama and by Clinton, who spent four years in the administration as secretary of state. But Trump has been vague about how he would put the nation on a different course, offering virtually no details of his policy prescriptions despite repeated vows to be tough.

Campaign chairman Paul Manafort said Trump would "eventually" outline policy specifics but not at the convention.

Clinton, during remarks Monday at the NAACP's annual convention, said there was no justification for directing violence at law enforcement.

"As president, I will bring the full weight of the law to bear in making sure those who kill police officers are brought to justice," she said.

Clinton was expected to be a frequent target of the eclectic group of lawmakers, military service members and entertainers headlining opening night of the convention. They include Sens. Joni Ernst of Iowa and Jeff Sessions of Alabama, actor Scott Baio and Willie Robertson, star of Duck Dynasty, as well as immigration advocates and a Marine who fought in the Benghazi attack that occurred during Clinton's tenure at the State Department.

The speakers' line-up of speakers and no-shows for the four-night convention was a visual representation of Trump's struggles to unify Republicans. From the party's former presidents to the host state governor, many leaders were staying away from the convention stage, or Cleveland altogether, wary of being linked to a man whose proposals and temperament have sparked an identity crisis within the GOP.

Trump's team insists that by the end of the week, Republicans will plunge into the general election campaign united in their mission to defeat Clinton. But campaign officials undermined their own effort Monday by picking a fight with Ohio Gov. John Kasich, who is not attending the convention and has yet to endorse Trump.

Manafort called Kasich "petulant" and said the governor was "embarrassing" his party in his home state.

Even some of those participating in the convention seemed to be avoiding their party's nominee. When House Speaker Paul Ryan spoke to Wisconsin delegates Monday morning, he made no mention of Trump in his remarks.

Republican Party leadership and officials from Donald Trump's campaign said Monday they'd held 11th-hour talks with anti-Trump delegates to see if they could avert a messy floor fight, live on television, over the rules. But one official said the negotiations had failed, speaking on condition of anonymity to describe private discussions.

The roll call vote on the nomination is expected Tuesday, with Trump scheduled to close the convention with an acceptance speech Thursday night. Vice presidential pick Mike Pence, who left Indianapolis for Cleveland on Monday, is to speak Wednesday.

The summer disturbances had tensions running high outside the heavily secured convention site in Cleveland.

Hundreds of Trump supporters and opponents held rallies a half-mile apart, with a few of the Trump supporters openly carrying guns as allowed under Ohio law. The president of the police union had asked Kasich to suspend the law allowing gun owners to carry firearms in plain sight. But Kasich said he didn't have that authority.

AP writers Kathleen Hennessey, Erica Werner and Josh Lederman in Cleveland and Bill Barrow in Atlanta contributed to this report.