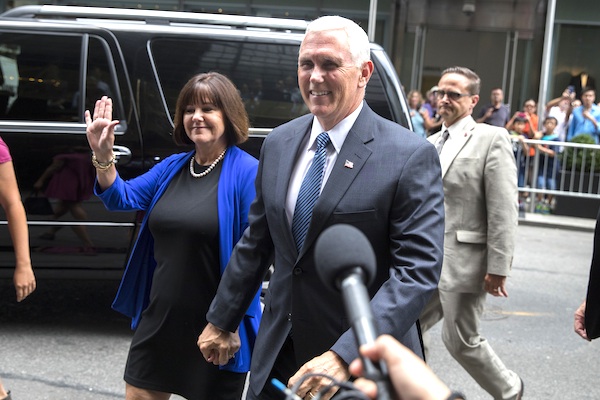 NEW YORK (AP) — His running mate largely unknown to the public, Republican presidential candidate Donald Trump is introducing Indiana Gov. Mike Pence, a steady conservative with governing experience inside and outside of Washington.

Trump and Pence will appear together Saturday morning at a midtown Manhattan hotel, an unofficial kickoff event to the Republican National Convention two days before it opens in Cleveland.

While Trump showcases his choice, Democrat Hillary Clinton's team is already painting Pence's conservative social viewpoints as out of step with the mainstream.

Trump chose Pence in part to ease some Republicans' concerns about Trump's temperament and lack of political experience. The billionaire's freewheeling, impulsive style and unorthodox policy positions has alienated many in his party.

Pence, whose demeanor is as calm as Trump's is fiery, brings a discipline that aides and advisers hoped could bridge that gap. Republican officials were overwhelmingly positive in their reactions to a Trump-Pence ticket.

"It was a pick that clearly shows he is pivoting to the general election," said GOP Chairman Reince Priebus, who was in the midst of an interview with The Associated Press when Trump announced his decision Friday morning.

"He is choosing a person who has the experience inside and outside Washington, Christian conservative, very different style that I think shows a lot of maturity."

Pence is well-regarded by evangelical Christians, particularly after signing a law that critics said would allow businesses to deny service to gay people for religious reasons. But his hard-line ideology is also at odds with Trump, who has largely avoided discussion of social issues.

In choosing Pence, Trump also appears to be looking past their numerous policy differences. The governor has been a longtime advocate of trade deals such as NAFTA and the Trans Pacific Partnership, both of which Trump aggressively opposes.

Pence also has been critical of Trump's proposed temporary ban on foreign Muslims entering the United States, calling the idea "offensive and unconstitutional." He also endorsed Sen. Ted Cruz instead of Trump ahead of Indiana's presidential primary.

Trump spent weeks weighing vice presidential contenders, including former House Speaker Newt Gingrich and New Jersey Gov. Chris Christie, and only zeroed in on Pence in recent days. For Pence, a different decision loomed: to continue his re-election bid in Indiana or bow out of the race to join Trump if invited.

Word that Pence would be joining the Republican ticket began trickling out in news reports Thursday before Trump had made a final decision or called Pence to offer him the job, according to a Republican familiar with the situation. Trump was in California for fundraisers, separated from his closest aides, and was fuming about leaks that were viewed as an attempt to pressure him into the decision.

Still, the billionaire called Pence Thursday afternoon to offer him the job and ask him to fly to New York for a Friday morning news conference.

A few hours later, a huge truck barreled through a crowded holiday celebration in Nice, France. With Pence sitting in a New York hotel, Trump decided to postpone the announcement and later told Fox News he had not yet settled on his "final, final" choice.

Trump held a midnight conference call with his top aides to discuss the situation, according to two people with knowledge of the call. By Friday, plans were back on track and Trump sent out a Twitter message announcing Pence as his running mate.

Moments later, one of Pence's aides filed paperwork withdrawing him from the governor's race about an hour before a noon deadline. State law prohibits candidates from being on ballots in two contests.