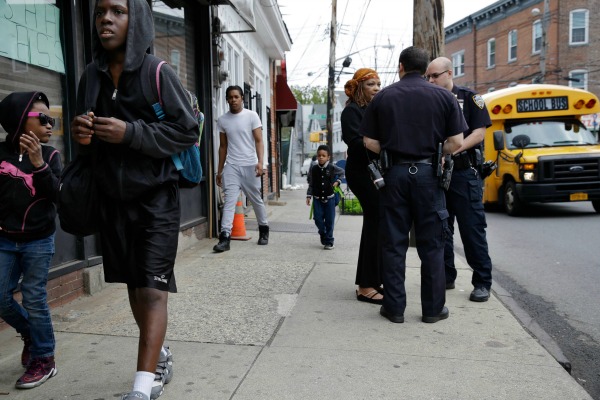 NEW YORK (AP) — On an unusually cool night for summer, Mike Perry and his crew thread the sidewalks running through Staten Island's Stapleton Houses, tracked by police cameras bolted to the apartment blocks and positioned atop poles.

Perry's group, five black men and one Latino, all acknowledge past crimes or prison time. Perry, himself, used to deal drugs around another low-income housing complex, two miles away. Now, though, their Cure Violence team works to defuse arguments that can lead to shootings. Their goals are not so different from those of the police.

While Perry gives cops their due, he keeps his distance. Two years ago, within walking distance of this spot, a black man named Eric Garner died in a confrontation with police officers. Garner was suspected of selling loose cigarettes; an officer wrestled him to the ground by his neck. His last words — "I can't breathe" — were captured on cellphone video that rocketed across the internet.

"I know those officers did not mean to kill Eric," says Perry, a 37-year-old father of two who knew Garner.

But, "you need to look an officer in the eye who doesn't understand and go, 'Brother, I want to get home, too.' They're defending these communities that they don't know."

As Americans struggle with the deaths of black men in encounters with police across the country, and now the killing of five Dallas officers, Perry and his fellow Staten Islanders have the dubious distinction of being a step ahead. Since Garner's death in July 2014, they have confronted a measure of the anger and pain the nation now shares.

A nationwide poll last summer by the Associated Press-NORC Center for Public Affairs found that 81 percent of black Americans said police are too quick to use deadly force, compared with 33 percent of whites. But the voices of Staten Islanders speak to attitudes and experiences that are often more complicated than poll numbers.

About 3,000 police officers live there, many in the heavily white neighborhoods on the southern two-thirds of the Island. In those neighborhoods, protests that followed Garner's death in July 2014 were met with "God Bless the NYPD" yard signs and pro-police rallies. The tensions intensified after a grand jury decided not to indict the officer for Garner's death. Two weeks later, a man claiming vengeance killed two officers in Brooklyn.

On an island of 475,000 that is 75 percent white and mostly suburban, the North Shore's comparatively dense neighborhoods are home to nearly all of the borough's African-Americans.

Leroy Downs, 41, has lived on Staten Island since he was 5 and works as a drug treatment counselor. But tonight he talks about, just maybe, becoming a cop, though as a black man he has been stopped repeatedly by police — without cause, he says.

Downs testified against the NYPD when a legal advocacy group sued and won a 2013 ruling that sweeping stop-and-frisks violate the constitutional rights of minority New Yorkers.

He sees little change in the relationship between cops and minorities despite the verdict. But he hasn't given up hoping.

"I can't imagine the world without police," he says. "It'd be anarchy."

The city says it has made some progress. Last year, it began assigning pairs of officers to specific neighborhoods, rather than having them rush from call to call across precincts. They are mandated to spend a third of their shift "off-radio," talking with residents to forge relationships.

Jessi D'Ambrosio, 32, and Mary Gillespie, 28, are the new "neighborhood coordinating officers" for the six-building Richmond Terrace project where Garner once lived. When the two officers, both white and longtime Staten Islanders, walk through the grounds, residents readily return their greetings.

"They're such homeboy, homegirl," tenants association president Eunice Love says of the two officers. "They know how to get along with people and relate and we love that."

D'Ambrosio measures progress in everyday experience. When one resident called to report a teen wanted for breaking into nearby houses, he took it as a sign of trust.

"It's small steps," he says. "You know you can't just wake up tomorrow and think the world is going to change. But they seem, still, to have accepted us."

Gwen Carr, Eric Garner's mother, wants more. She stands in the small park across the street from the spot where he fell and cringes as a man who appears to be homeless sprawls across a bench, asleep though it's not yet 1 p.m. And a young woman — "Alcohol Gives You Wings," tattooed down her left arm — sits on the edge of a dry fountain, trying to sell used shoes.

"How much good did they do?" Carr says of police. "Where are they when you need them?"

If her son's death means something, Carr says, officials can clean up this block where regulars say drinking and drugs have increased since Garner's death. She wants New York to turn the park into a playground, reserved for children and guardians.

Doug Brinson, who sells T-shirts from sidewalk tables, rails against police for Garner's death. But fighting and drinking on this block makes clear the need for police, he said.

This story is part of Divided America, AP's ongoing exploration of the economic, social and political divisions in American society.