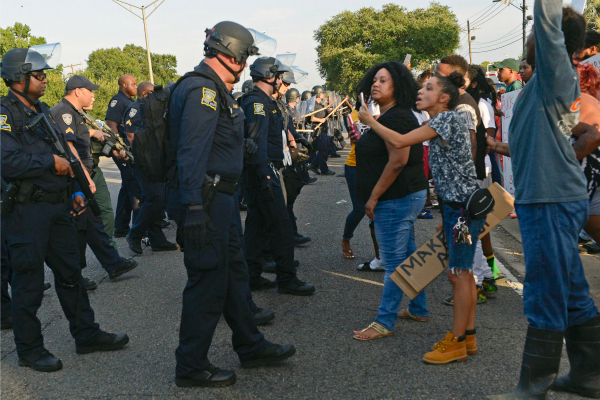 BATON ROUGE, La. — Local organizing groups and the American Civil Liberties Union of Louisiana filed a lawsuit today against the Baton Rouge Police Department for violating the First Amendment rights of demonstrators who were protesting peacefully against the killing of Alton Sterling. The case is co-counseled by Sima Atri, staff attorney at the New Orleans Workers’ Center for Racial Justice and cooperating counsel Ron Wilson on behalf of on behalf of Black Youth Project 100 and the Louisiana chapter of the National Lawyers Guild.

The lawsuit alleges that the police used excessive force, physical and verbal abuse, and wrongful arrests to disperse protestors who were gathered peacefully to speak out against the police killing of Alton Sterling. Eyewitness accounts recorded by plaintiffs in the suit show police in full riot gear with assault rifles, lunging and grabbing at peacefully assembled people and throwing them to the ground.

“[The police response] made me afraid to protest. Seeing the way the police were manhandling folks caused me to hide, scream out of fear, and finally flee for my safety. I had to run. A peaceful demonstration should never be like that,” expressed Crystal Williams, local resident and organizer with North Baton Rouge Matters, “I feel like speech is my most powerful tool to ensure my community and my family are safe. But now I feel totally silenced.”

“I witnessed firsthand as peaceful protestors were violently attacked and arrested, assault weapons pointed at them with fingers on the triggers, some dragged across the cement, their clothes ripped off of them,” said Louisiana Chapter of the National Lawyers Guild President and a Catholic nun Alison Renee McCrary “What I saw happening was an immediate threat to life. My and other demonstrators’ speech was chilled because of this event.”

Counsel also filed for a temporary restraining order against the defendants to prevent them from interfering with people’s constitutionally protected right to gather peacefully moving forward.

“The police didn’t do their job in Baton Rouge, again. They are bound to protect us from harm, to keep us safe, to do everything possible before throwing someone to the ground or pulling the trigger. Yet Alton Sterling is on the long list of Black people killed needlessly by our nation’s police, and protests in his honor have turned into circuses of violence where the First Amendment is tossed aside,” said ACLU of Louisiana Executive Director Marjorie Esman. “We can’t bring Alton Sterling back but at minimum, the police can stop blocking our right to protest in his name.”

A copy of the lawsuit can be found at: https://www.aclu.org/sites/default/files/field_document/160713_filed_complaint_-_doc._1.pdf

Press Release can be found at: https://www.aclu.org/news/aclu-louisiana-sues-baton-rouge-police-first-amendment-violations-alton-sterling-protest