Can Redistricting Reform Close the Minority Gap in Capitols? 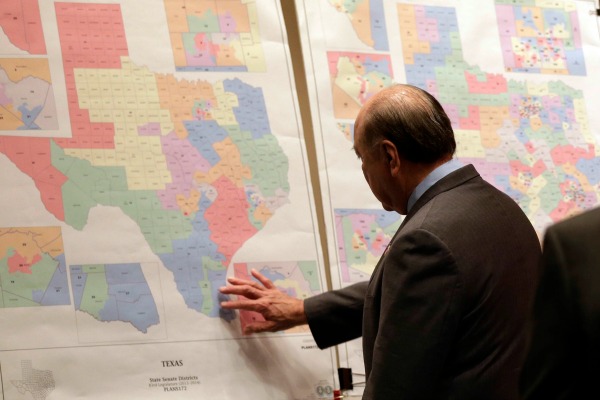 They have nicknames like "the dead lizard," ''the praying mantis" and "the upside-down elephant."

The odd-shaped legislative districts that dot many states are no coincidence. The jagged lines often have been carefully drawn by state lawmakers to benefit particular incumbents or political parties. The tactic, known as gerrymandering, is nearly as old as the country itself.

It's also a maneuver that can result in an underrepresentation of minorities in some legislatures. Across the U.S, minorities now comprise nearly two-fifths of the population, yet hold less than one-fifth of all legislative seats, according to an Associated Press analysis of data from the U.S. Census Bureau, Congress and the National Conference of State Legislatures.

Federal guidelines require that legislative districts are similar in population and not drawn to deny minorities a chance to elect the candidate of their choice.

But racial gerrymandering can occur in a couple of ways: when minority communities are divided among multiple districts, thus diluting their voting strength; or when minorities are heavily packed into a single district, thus diminishing their likelihood of winning multiple seats.

Federal judges ruled recently that lawmakers illegally packed large numbers of black voters into congressional districts in North Carolina and Virginia. But the U.S. Supreme Court upheld an Arizona map that increased Hispanic percentages in some districts by loading more white voters in others. Lawsuits challenging the redistricting done after the 2010 census still are pending in several states.

Meanwhile, momentum appears to be building to pare back the role of partisan politics in redistricting.

The politically powerful states of California, Florida, New York and Ohio all have overhauled their redistricting processes in recent years. Nebraska lawmakers passed a measure this year to create an independent redistricting panel, though it was vetoed by a governor who cited constitutional concerns. Indiana is studying redistricting changes, and a redistricting initiative will appear on the ballot this fall in South Dakota.

Voters in Illinois also could decide this November on a proposed constitutional amendment that would strip the redistricting responsibility from the Legislature and hand it to a new 11-member citizen panel that would be barred from favoring any political party as it draws the boundaries.

"If you remove the partisan intent, then you make it much easier to draw maps that are fair for everyone, including minority groups," said Dave Mellet, campaign manager for Independent Maps, the organization sponsoring the Illinois initiative.

In most places, state lawmakers currently divvy up districts every 10 years, after each census. But commissions are primarily responsible for U.S. congressional redistricting in six states and for state legislative redistricting in 13 states, with varying degrees of political independence.

Some minority lawmakers want to expand the use of special redistricting panels.

An appointed commission "creates the appearance of more fairness, and you'd have more of an opportunity for there to be more diversity if you do it that way," said Delaware state Sen. Margaret Rose Henry, the only black senator in a state where African-Americans comprise more than one-fifth of the population.

An independent commission began handling redistricting in California following the 2010 census as the result of a voter-approved initiative.

The nonpartisan Public Policy Institute of California found that the maps produced by the independent commission included six additional Assembly districts where Latinos comprised a majority of residents and one more in the Senate. The maps also created the state's first district where Asian Americans were a majority.

Despite that, the number of Latinos in the California legislature declined from 28 in 2007 to 23 in 2015, according to figures from the National Conference of State Legislatures.

Assemblyman Luis Alejo, chairman of the California Latino Legislative Caucus, cites lower voter turnout and the departure of some Latino incumbents for the decline. He remains a supporter of the independent redistricting commission as "a less political process" and believes Latinos ultimately will benefit from it.