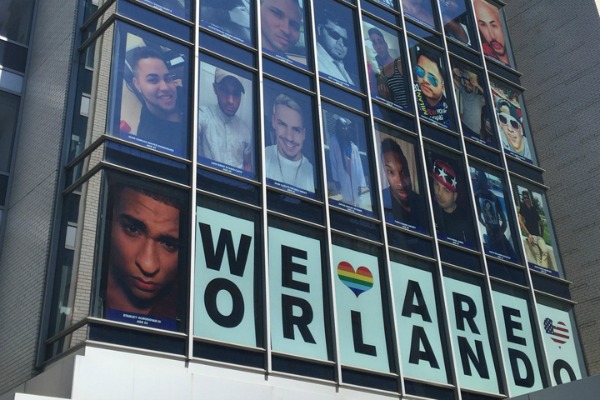 The Human Rights Campaign (HRC), a civil rights advocacy group and political lobbying organization for the LGBTQ community, showed support for the victims of the Orlando massacre by posting photos of the victims with their names and ages in each window of their downtown Washington, D.C. office. In huge block letters a sign read: “We are Orlando.” Just outside their building, the organization hung a wreath and a board where supporters posted messages of love, solidarity and condolences for the victims of the tragedy and their families.

Residents and visitors to Washington, D.C. also expressed their unity with the victims and their families through donations, marches and candle light vigils. Emmanuel Kamonyo, who is originally from Rwanda and currently working in Nairobi, came to the HRC headquarters to share his feelings about the tragedy.

“I support equality. I support non-discrimination,” said Kamonyo. “It’s a terrible event, so I passed by to give my support and to sign something.”

Joe Solmonese, a Washington, D.C. resident and a member of the LGBTQ community said that the HRC memorial is an extraordinary and incredible tribute to the victims and the strength and the power of the community in Orlando, Fla., in Washington, D.C. and the world.

“This is beyond emotional. The amount of love that people have shown in such a bad, hateful, evil situation has been unbelievable,” said Joanna Osterhout, an Orlando resident and a LGBTQ member. “It’s really been emotional and empowering, and it makes you want to fight the injustice that was done, not just for the 49 individuals and the 53 that were injured, but for anyone who has not stood up for it.”

Denise Murray, who is also an Orlando resident and a member of the LGBTQ community said that she was very honored and touched to be in Washington, D.C. and see the support for the victims of the tragedy of Orlando.

“We came on this trip to support our team, the Orlando Pride, with our supportive group ‘The Crown,’ and the city has embraced us and really helped us with our mourning process, so we are very grateful,” said Murray. “Our hearts are forever touched by the compassion that we have seen here in D.C. for our city.”

The June 12 Orlando massacre at Pulse nightclub left 49 people dead and 53 injured. The club was considered a safe space for the LGBTQ community.

Three days after the shooting, Senate Democrats started a surprise filibuster holding any legislation hostage until the issue of gun safety reform was addressed. According to the Associated Press, Senator Chris Murphy (D-Conn.) started the filibuster at about 11:20 a.m. on June 15. Murphy tweeted before he began speaking that he would stay on the floor as long as necessary and prevent legislators from bringing any other issues to the floor for as long as he could continue talking.

According to AP, Murphy referenced Congress’ failure to pass any legislation in the aftermath of Sandy Hook during his speech. “For those of us that represent Connecticut, the failure of this body to do anything, anything at all in the face of that continued slaughter isn’t just painful to us, it’s unconscionable,” he said.

The filibuster lasted for nearly 15 hours and ended after Republican Party leaders reportedly agreed to allow votes on two proposed gun control measures. The measures considered a ban people on the government’s terrorist watch list from obtaining gun licenses and whether to expand background checks to gun shows and Internet sales.
The gunman, Omar Mateen, was investigated by the FBI twice and cleared of suspected ties to terrorists, before he purchased the guns that he used during the massacre.

Earlier this week, Democrats, led by civil rights icon Rep. John Lewis (D-Ga.) staged a historic sit-in on the house floor at the U.S. Capitol to protest the lack of progress on legislation that would address gun show loopholes and measures that would prevent people that landed on “no-fly” list from buying guns and ammunition.

Rep. Lewis said that lawmakers must return after the July 4th break, “more determined than ever before,” according to CNN.com.

“We are going to win,” said Lewis after the sit-in had ended, CNN.com reported. “The fight is not over. This is just one step of when we come back here on July the 5th we’re going to continue to push, to pull, to stand up, and if necessary, to sit down.”

In the aftermath of the Orlando shootings, the HRC released a policy position statement that favored gun control legislation.

HRC Communications Director Jay Brown said, “We are endorsing common sense gun safety prevention measures and that we recognize anti-LGBTQ hate is real and it’s made even more deadly with the unsafe access to guns by people who shouldn’t have them.”

Victoria Jones is a 2016 NNPA “Discover The Unexpected” (DTU) journalism fellow at The Washington Informer. The DTU journalism fellowship program is sponsored by Chevrolet. Check out more stories by the fellows by following the hashtag #DiscoverTheUnexpected on Twitter and Instagram. Like our Facebook page at “NNPA Discover The Unexpected.” Learn more about the program at www.nnpa.org/dtu.