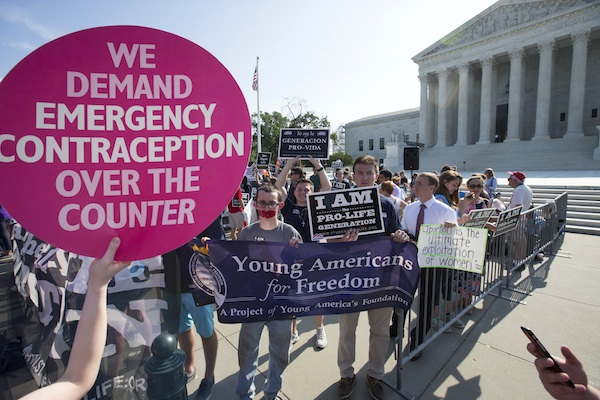 WASHINGTON (AP) — The Supreme Court is set to close out its current term with opinions Monday in three remaining cases after a flurry of decisions last week.

It's expected to be the justices' final meeting before they disperse on their summer breaks.

The last three cases concern regulation of Texas abortion clinics, the public corruption conviction of former Gov. Bob McDonnell of Virginia and a federal law that seeks to keep guns out of the hands of people convicted of domestic violence.

Protesters on both sides of the abortion issue were in front of the court Monday morning in advance of the decision. Abortion-rights advocates held signs saying, "Keep Clinics Open" and blasted music, including the 1970s song "I'm Every Woman." Anti-abortion demonstrators waved signs saying, "I Am the Pro-life Generation."

Just eight justices are taking part in the cases following the death of Justice Antonin Scalia in February. President Barack Obama has nominated federal appeals court Judge Merrick Garland to take Scalia's place, but Garland has not received a hearing or a vote in the Republican-controlled Senate.

Late June often is when a retirement is announced, but voluntary departures from the court almost never happen in election years.

The justices handed down five rulings on Thursday, including two cases that ended in 4-4 ties.

A look at the remaining cases:
— Abortion: Texas abortion clinics are challenging a state law and regulations that already have cut the number of abortion providers in half, to roughly 20. Fewer than 10 would remain if the 2013 law were allowed to take full effect.

One positive sign for the clinics is that only Justices Stephen Breyer and Elena Kagan, who generally side with abortion rights advocates, have yet to write opinions from the session in late February and early March when the case was argued.

Each justice typically writes at least one majority opinion from each argument session.

— Public corruption: The justices seemed likely to side with McDonnell, who is challenging his conviction for accepting gifts and loans from a wealthy businessman in exchange for promoting a dietary supplement. A ruling for McDonnell could make it harder to prosecute public officials.

— Guns: Two men from Maine are challenging their convictions for possessing guns under a federal law that is intended to keep guns out of the hands of people who have previously been convicted of domestic violence.