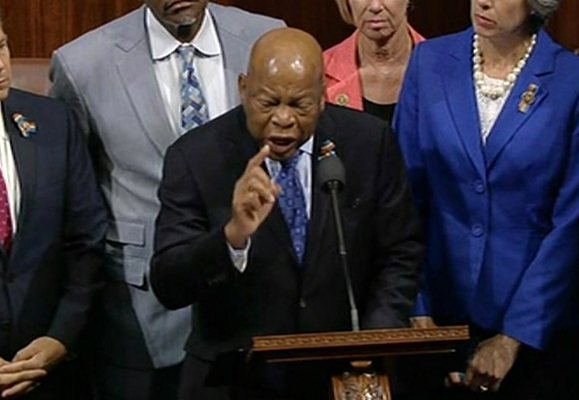 The Associated Press
Published: 23 June 2016
WASHINGTON (AP) — House Democrats have ended their 25½-hour sit-in on the chamber's floor that they've been staging to demand votes on gun control.

With just a few interruptions, Democrats commanded the House floor since 11:30 a.m. Wednesday. The protest was broadcast live to the world over social media.

There are no indications that Republicans — who control the House — have met the Democrats' demands.

One of the protest leaders, civil rights veteran and Georgia lawmaker John Lewis of Georgia, says: "We are going to win this struggle."

The sit-in was well into its 10th hour, with Democrats camped out on the floor stopping legislative business in the House, when House speaker Paul Ryan stepped to the podium to gavel the House into session and hold votes on routine business. Angry Democrats chanted "No bill, no break!" and waved pieces of paper with the names of gun victims, continuing their protest in the well of the House even as lawmakers voted on a previously scheduled and unrelated measure to overturn a veto by President Barack Obama.

Ryan attempted to ignore the outbursts and announce the business of the day, pounding down his gavel over shouting. "Shame! Shame! Shame!" Democrats yelled, but Ryan left the lectern and the voting continued. Then Democrats began singing "We Shall Overcome," still holding up the names of gun victims.

The scene presented a radical, almost shocking departure from the normal orderly conduct of the House. Around 3:15 a.m. Thursday Republicans adjourned the House until after July 4th over Democrats' protest and ignoring their demands, but Democrats stayed on the floor.

Republicans hoped to present themselves as soberly attending to business and Democrats as disruptive. Democrats said they would stay until Republicans yielded to their demands to hold votes on bills to strengthen background checks and prevent people on the no fly list from getting guns in the wake of last week's massacre in Orlando, Florida.

"Are they more afraid than the children at Sandy Hook?" asked Rep. Mike Thompson, D-Calif., referring to the 2012 shooting that killed 26 people, including 20 elementary school children, in Newtown, Connecticut. "What is so scary about having a vote?"

Rep. John Lewis, a veteran civil rights leader, asked what Congress has done, then answered his own question: "Nothing. We have turned a deaf ear to the blood of innocents. We are blind to a crisis. Where is our courage?"

Ryan dismissed the protest as "nothing more than a publicity stunt," and in an interview with CNN, made clear there would be no vote.

"We're not going to take away a citizen's constitutional rights without due process," he said.

The protest began around 11:30 a.m., interrupted briefly when Rep. Ted Poe, R-Texas, tried to start the House's work at noon. The customary prayer and Pledge of Allegiance went ahead, but Poe was forced to recess the House when dozens of Democrats refused to leave the well.

By evening, 168 House Democrats — out of 188 — and 34 Senate Democrats joined the protest, according to the House minority leader's office. One after another, they spoke of the need for gun control and talked of constituents who had been killed.

Scattered around the House floor were signs reading "Disarm Hate." Visitors watched from the galleries. A crowd of several hundred gun control advocates gathered outside the Capitol and cheered as Democrats addressed them.

Congress remains gridlocked over gun control, a divide even more pronounced in a presidential election year. The sit-in had the feel of a 1960s-style protest, as some lawmakers sat on the floor, others in their seats.

Republicans had staged a similar protest in 2008. Democrats controlling the House at the time turned off the cameras amid a GOP push for a vote to expand oil and gas drilling. Republicans occupied the floor, delivering speeches after then-Speaker Nancy Pelosi sent the House on its August recess. Pelosi ordered the cameras turned off.

Republicans ultimately forced the drilling provision to be attached to a stopgap spending bill.

C-SPAN, a cable and satellite network that provides continual coverage of House and Senate floor proceedings, does not control the cameras. They're run on authorization by legislative leaders.

Although the cameras were turned off Wednesday, lawmakers relied on social media to transmit video, using Facebook, Twitter and Periscope. C-SPAN broadcast live video streamed on Periscope and Facebook from lawmakers' accounts. Democrats posted the Capitol's main telephone number, which was overwhelmed, and urged constituents to call and request a vote. They also encouraged tweeting under the hashtag #NoBillNoBreak.