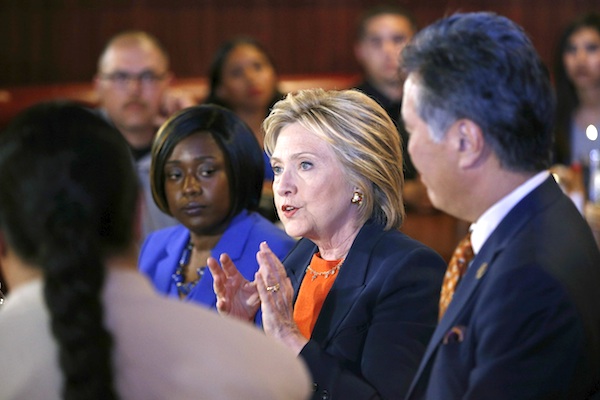 NEW YORK (AP) — Hillary Clinton may have found her message.

Wrapped in the guise of a foreign policy speech, Clinton delivered a political thrashing of Donald Trump on Thursday that was unquestionably a standout moment for a candidate who has often struggled to focus her White House campaign.

Clinton's sharply targeted remarks served notice on the presumptive Republican nominee that she's prepared for a bruising general election fight, one that's centered squarely on his competency to serve as commander in chief.

"He is not just unprepared — he is temperamentally unfit to hold an office that requires knowledge, stability and immense responsibility," Clinton said.

She cast Trump as dangerously thin-skinned, someone who might plunge the nation into war over a perceived slight. She repeatedly referred to her White House rival by his first name only — a knowing dig at a billionaire businessman whose closest advisers reverentially call him "Mr. Trump."

For Clinton, who has acknowledged her weakness as a campaigner, it was a confident and well-timed performance. Though she has struggled for months to shake Democratic primary rival Bernie Sanders, Clinton is poised to clinch the nomination in the coming days and secure her place in history as the first woman ever put forward by a major U.S. political party.

But the long primary season has come at a cost. Sanders has been unrelenting in his criticism of Clinton's judgment and transparency, evaporating much of the goodwill she accrued with Americans during the four years she spent outside the political arena as secretary of state.

Some of Clinton's own supporters also worry that she's failed to articulate a clear rationale for her own candidacy and will struggle to counteract Trump's ability to command the spotlight.

Clinton's takedown of Trump on Thursday should quiet those critics, at least for now.

Gone was the wonky, meandering policy speech Clinton has delivered to lukewarm reviews in primary campaign appearances. Instead, she was focused and direct, lacing her remarks on the Islamic State group and Iranian nuclear accord with bumper sticker-worthy slogans about Trump.

"This isn't reality television. This is actual reality," Clinton said as she chided the real estate mogul and political novice for his lack of experience on the world stage.

And in a line likely to be repeated by Clinton and Democrats between now and November, she warned that electing Trump would be a "historic mistake" for the nation.

To be sure, Clinton will face tough questions in the months ahead about her own foreign policy record. She was a leading proponent of U.S. military engagement in Libya, which succeeded in ousting a brutal dictator but left the country vulnerable to extremist groups. And she'll continue to have to answer for her vote in support of the Iraq war, which Sanders has repeatedly held up as a sign of poor judgment. He did so again on Thursday.

But the speech suggested Clinton will be far more at ease responding to a Republican challenger than she has been at confronting Sanders in the Democratic primary, where she's had to avoid turning off his young, liberal supporters.

On Thursday, she made no attempt to appeal to Trump's backers or even show the slightest sign of respect for the Republican nominee.

The result? Clinton succeeded in generating the same kind of attention Trump receives for his frequent rallies and news conferences: Her remarks were widely carried on the television news networks. Despite Clinton's standing as the Democratic front-runner, that is a basic benchmark she has struggled to reach. Trump has no such problem.

Trump himself appeared to be watching Clinton, too. He took to Twitter midway through the speech to remark that his likely Democratic opponent "doesn't even look presidential."

There was notable silence from many other Republicans, some of whom made similar arguments about Trump's temperament and inexperience during the GOP primary. A handful of Republicans even praised the likely Democratic nominee.

"I have to say, Hillary is giving a hell of a good speech on national security — taking down the Donald while making a convincing case," Eliot Cohen, a foreign policy official for Presidents George H.W. Bush and George W. Bush, wrote on Twitter.

For Clinton's strong showing to have lasting impact, it will need to be more than just a one-off moment.

Some of Trump's primary rivals had fleeting success in rattling the supremely confident businessman and in raising issues that appeared to give voters momentary pause. But those arguments were rarely made in a sustained fashion and in some cases came too late to change the trajectory of the Republican race.

If Clinton plans to avoid those same mistakes, she now has the message she needs in hand.