No Civil Rights Charges in Shooting of Minneapolis Black Man 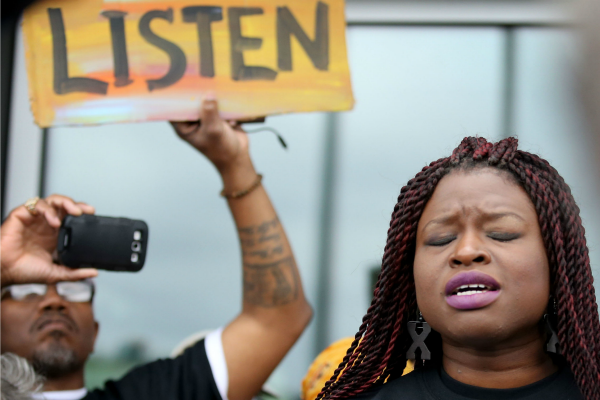 Andrew Luger said there was insufficient evidence to support charges against the two officers who attempted to arrest Jamar Clark, 24, following a report that he was interfering with paramedics treating an assault victim.

Clark was shot once in the head Nov. 15 and died a day later.

A key issue was whether or not Clark was handcuffed when he was shot. Luger said at a news conference that evidence indicated Clark was not restrained at the time.

"Given the lack of bruising, the lack of Mr. Clark's DNA on the handcuffs and the deeply conflicting testimony about whether he was handcuffed, we determined that we could not pursue this case based on a prosecution theory that Mr. Clark was handcuffed at the time he was shot," Luger said.

Luger said "highly contradictory" testimony from witnesses would make it too difficult to prove beyond a reasonable doubt that Officers Mark Ringgenberg and Dustin Schwarze acted outside the law.

The killing set off weeks of protests, including an 18-day tent encampment outside the police department's 4th Precinct on the north side.

According to a Minnesota Bureau of Criminal Apprehension investigation, Clark refused to remove his hands from his pockets. The officers tried to handcuff him but failed. Ringgenberg wrestled Clark to the ground but wound up on his back atop Clark and felt Clark's hand on his weapon, according to the investigation.

Schwarze then shot Clark in an encounter that lasted barely more than a minute from the time the officers arrived.

"There are no winners here." Luger said, adding: "A young man has died. And it is tragic."

Schwarze's attorney, Fred Bruno, said the decision was no surprise and that two independent investigations have reached the same conclusion.

"The chances of that happening are pretty slim unless the facts are the facts and the officers are justified in doing what they did," he said.

Ringgenberg's attorney, Bob Sicoli, said he hoped a pending internal investigation by the police department would be over quickly.

The U.S. Attorney's Office in Minnesota and the Justice Department's Civil Rights Division conducted the federal civil rights investigation on the request of Mayor Betsy Hodges, to determine whether the officers intentionally violated Clark's civil rights through excessive force. That's a high legal standard because an accident, bad judgment or simple negligence is not enough to bring federal charges.

The DOJ is also reviewing how the city responded to the protests that followed Clark's death. Though those protests were largely peaceful, one demonstration outside the 4th Precinct soon after the shooting included some skirmishes between officers and protesters. At least one federal lawsuit has been filed accusing officers of excessive force during a Nov. 18 demonstration.

Five demonstrators were also shot and lightly wounded near the 4th Precinct Nov. 23 in what a county prosecutor said was a racially motivated attack. Four men — three white, one Asian — were charged.

The Clark shooting spurred state lawmakers to examine longstanding complaints of racial inequities, particularly on the impoverished north side. Advocates requested more investment in minority-owned businesses and a summer job program for black teens, and lawmakers this spring set aside $35 million.