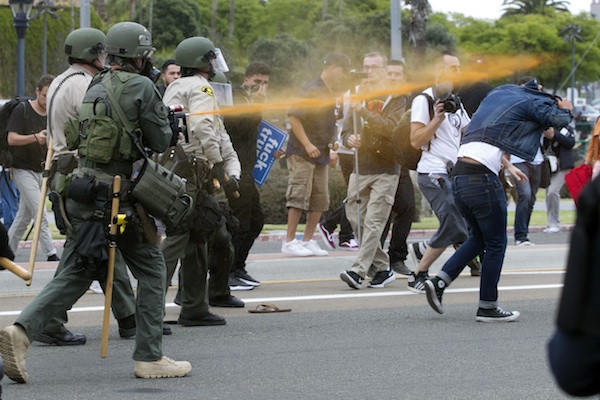 WASHINGTON (AP) — It started with Mexicans being publicly accused by presidential candidate Donald Trump of being criminals and rapists. It escalated to ejections, to sucker punches, to pepper spray. And now violence and strife seems to be a commonplace occurrence out on the campaign trail.

As the 2016 presidential campaign turns toward the rapidly diversifying West, it has officially buried any thoughts of a post-racial United States, with racial and ethnic groups at the center of the most public strife seen in the political arena since the height of the civil rights movement.

Much of the violence has revolved around the ascendancy of GOP presidential candidate Donald Trump, first toward minorities and now by minorities protesting his policies.

Karla Molinar, 21, a University of New Mexico student, participated in a planned disruption of Trump's speech and said she had no choice because Trump is sparking hatred of Mexican immigrants. Trump, among other things, has called for a ban on Muslims entering the United States and declared that he will build a wall along the U.S.-Mexico border.

"Trump is causing the hate to get worse," she said.

Earlier this year, demonstrators against Trump swarmed outside the hotel near San Francisco airport, forcing the candidate Trump to crawl under a fence to enter the hotel where he met with local GOP power brokers. Other protesters tangled with authorities and damaged police cars after a Trump rally in Orange County, California.

Earlier, the violence was aimed toward minorities. For example:
— A black woman was surrounded, cursed and shoved by white onlookers at a Trump rally in Louisville, Kentucky in March.
— Latino demonstrators Ariel Rojas was kicked and dragged by a white Trump supporter at a rally in Miami in October.
— A black male protester, Rakeem Jones, was punched from behind by white Trump supporter John McGraw as Jones was being ejected from a rally by police in North Carolina. McGraw was later arrested.

— Video captured Trump supporters physically assaulting Mercutio Southall Jr., an African-American activist, at a rally in Birmingham, Alabama in November. Southall said afterward he was called several expletives by the crowd and later compared them to a "lynch mob."

While political violence is not unknown, like the 1968 violence at the Democratic National Convention in Chicago where 119 police and 100 protesters were injured, rarely has it been targeted so specifically at minorities, said Matt Dallak, a professor of political management in the Graduate School of Political Management at George Washington University.

He also laid much of the responsibility on Trump, who started his political campaign by comparing undocumented immigrants from Mexico to criminals and rapists. The crowds at Trump's rallies are feeding off him "demonizing particular segments of the population, including racial minorities" he said.

"When you are whipping people up, it contributes to an atmosphere that leads to the potential of political violence. Words matter," he said.

Trump says he does not encourage violence; the fault, he says, lies with the demonstrators. But the political rhetoric is feeding into misplaced myths about the contributions of minorities to this society, said Sol Trujillo, founder and chair of the Latino Donor Collaborative.

Ken Burns, an Academy Award-winning documentary filmmaker, said some of Trump's comments and actions — like forgetting that he had repudiated a Ku Klux Klan leader — "that is the wink-wink dog whistle that signals to our unreconstructed brothers."

"We'd like to believe in our better selves but in point of fact, a lot of us aren't that," said Burns, who explored racial tensions in his documentary, "Jackie Robinson."

No one has died yet this campaign season. However, violence — including some that has been fatal — has often been suffered by minorities participating in political processes and social protesting.

For example, an estimated 150 blacks and three whites were killed after white Louisianans attempted to take over a courthouse in Colfax, Louisiana on Easter Sunday after losing a statewide election to reconstructionists in 1872, which became known as the Colfax Massacre. And Rev. George Lee was gunned down in Belzoni, Mississippi in May 7, 1954 for his attempts to get blacks to vote. In August 1955, World War II veteran Lamar Smith was shot on the courthouse lawn in Brookhaven, Mississippi, for urging blacks to vote.

Lee had turned down police protection because it was offered only on the condition he stopped his voter registration efforts.
___
Associated Press writer Russell Contreras in Albuquerque, New Mexico, contributed to this report.
___
Jesse J. Holland covers race and ethnicity for The Associated Press. Contact him at [email protected], on Twitter at http://www.twitter.com/jessejholland and on Facebook at http://www.facebook.com/jessejholland.