How Will Cleveland Rock the GOP Convention? 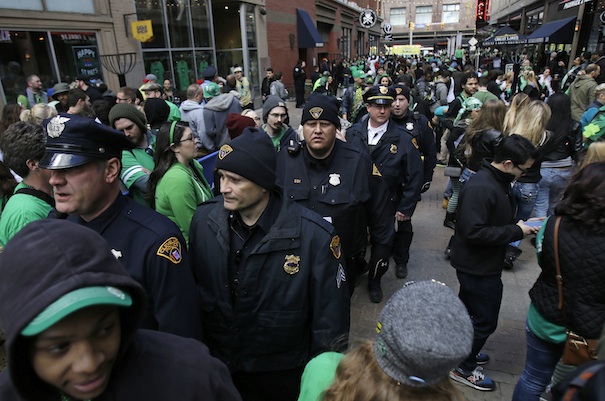 CLEVELAND (AP) — Cleveland managed to avoid the kind of violent confrontations between police and protesters seen in Missouri and Baltimore after police killed black residents, but will it be able to keep the peace when officers and activists flood downtown for the Republican National Convention?

City officials have been coy about their plans for handling convention protests, saying only they are prepared for "challenges" and are working to free up jail cells, while activists have warily eyed the city's acquisition of riot gear.

Larry Bresler, who hopes to help stage an economic-inequality protest on the first day of the July convention, is among those who believe activists this summer can't expect the same accommodations they got in protests after the police killing of black 12-year-old Tamir Rice and the acquittal of an officer for his role in the deaths of two unarmed black people in a 137-shot barrage.

Bresler called the convention "a whole different ballgame" and said he doesn't expect police to be so pliable this summer.

"I don't think there's a chance that'll be the case," he said.

After the killing of Tamir, who was carrying an airsoft gun that looked real, by a rookie patrolman, Cleveland officers would typically lead protest processions in their cruisers while blocking intersections and mostly allowing people to march where they pleased. During one of the first protests, marchers blocked a busy freeway. Police Chief Calvin Williams was often on hand to observe.

But the convention will prove an additional test for the Cleveland Police Department, which last year began operating under a reform-minded agreement called a consent decree after a U.S. Justice Department investigation concluded officers had shown a pattern of using excessive force and violating people's civil rights.

A city spokesman said no Cleveland officials would be available to comment for this article.

A police union official has said around 600 Cleveland police officers are expected to join several thousand officers hired from other law enforcement agencies to provide security downtown during the convention week. The Secret Service will be responsible for the security perimeter that surrounds the convention site, Quicken Loans Arena, at the edge of downtown.

"We are prepared to assist anyone who legally and lawfully wants to exercise their free speech rights," Deputy Chief Ed Tomba said.

Public Safety Director Michael McGrath told the council at the same meeting that the city is working with Cuyahoga County to free up jail cells should police need to arrest large numbers of people.

Activists have expressed concerns about the type of police-related equipment Cleveland is purchasing using the $50 million federal grant it received to pay for convention security, including 2,000 sets of riot gear. During a City Council hearing last month, police officials indicated that police would initially wear khaki uniforms and not riot gear, a practice police in other cities have used during political conventions.

While activists also said they were worried about Cleveland buying armored vehicles and "non-lethal" weapons that shoot bean bags and rubber pellets, there's no indication the city has bought any.

Two groups, including Bresler's, have submitted parade permit applications that said they expect as many as 5,000 people to participate in separate rallies on July 18, the first official day of the convention. Previous downtown protests never grew larger than several hundred people.

ACLU Ready to Sue over Permits

The other group planning a July 18 rally and march is Citizens for Trump. The American Civil Liberties Union on Thursday threatened to sue if the city doesn't decide whether to issue permits to the two group by June 1. The ACLU has said the groups have been told Cleveland won't issue permits until the U.S. Secret Service has finalized its security plan two weeks before the convention.

Police were sharply criticized last year after arresting around 70 people in an alley in downtown's popular Warehouse District of bars, restaurants and clubs. They were part of a protest held the day a judge acquitted a white police officer of voluntary manslaughter for his role in the deaths of the two unarmed black suspects.

Police said the arrests were made when protesters refuse to leave the alley; protesters said police wouldn't allow them to leave. The ACLU sued on behalf of some of the protesters, and the city settled out of court. It also issued a "statement of regret."

Republican presidential candidate Donald Trump earlier this year predicted riots if the GOP establishment tried to deny him the nomination should he acquire the necessary delegates. While Trump has all but clinched the nomination, downtown business owners said they are confident police will protect them.

"I'm not concerned about it," said Austin Ruesch, owner of Vegan Cafe a few blocks from Quicken Loans. "We're going to be open as much as possible."