Clinton Campaign May be Quieter but She Has Most Votes 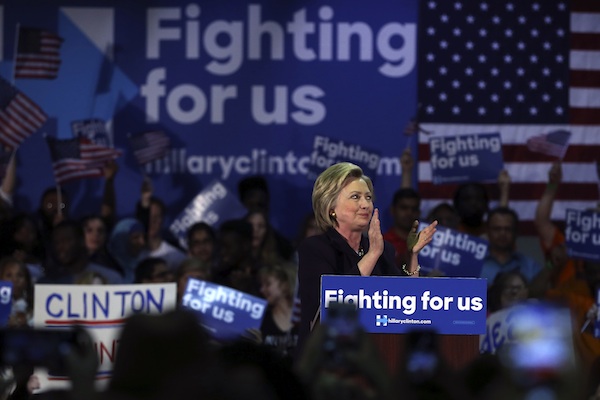 Whether Hillary Clinton is competing against Democratic rival Bernie Sanders or presumptive Republican nominee Donald Trump, one concern is much the same. They are outsider candidates riding a wave of populist excitement, while she is viewed as a traditional, establishment choice.

As a result, her campaign sometimes just looks a little less exciting.

Clinton has won far more votes than any other 2016 candidate. But if she moves into a general election matchup with Trump, she may continue to be dogged by questions about voter enthusiasm, especially as Trump pledges to continue his raucous rallies.

Clinton's supporters say they are not worried.
"Big crowds mean nothing," said former Pennsylvania Gov. Ed Rendell. "You don't get extra points for an enthusiastic vote versus a moderately enthusiastic vote."

Still, the differences are clear.

In recent days, Sanders rallied with roughly 4,000 in Salem, Oregon, and Trump drew thousands in Bellingham, Washington. Clinton held a rally with over 1,000 people in New Jersey, but also spoke about family issues at a gathering with about 15 in northern Virginia.

Trump's large crowds were good for more than his ego. They helped him power past his numerous rivals and to the verge of clinching the nomination as Clinton continues mopping up against her last remaining challenger.

Republican strategist Sara Fagen, who has not backed Trump, says Clinton "doesn't have a movement. She has a base of people that will show up, but they're not overly energized." Still, Fagen said a general election may be more challenging for Trump, noting that his success so far has been in a crowded primary.

"There's no doubt Trump is energizing an element of the electorate," she said. "But some people are showing up not to support him as well. He's divisive."

Crowd counts are just one measure of excitement. Polling suggests that the competitive Democratic race has energized voters, and exit polls find enthusiasm for Clinton as well as Sanders. About 2 in 5 primary voters were enthusiastic about their party's front-runner in a recent CNN poll.

Both Clinton and Trump have negative favorability ratings among general election voters. But Trump's negatives with people of all backgrounds are at historic highs, suggesting he may have difficulty connecting with a broad cross-section of voters in November.

Sanders and Trump have reveled in their large crowds as evidence of the power of their message. During a recent interview with The Associated Press,

Trump said the huge rallies would continue to be a centerpiece of his campaign. He argued that the excitement and momentum were more important than spending heavily in a sophisticated data operation to turn out voters.

"My coalition of voters is amazing," Trump said. "You know, we don't get enough credit. First of all, I have the biggest crowds by far. I have the most loyal voters by far."

Clinton, who shines in more intimate interactions, stressed early in the campaign that she wanted to engage with voters at smaller venues. She is on track to wrap up the nomination within weeks and is increasingly focusing on Trump as she tries to replicate the kind of data-heavy approach that helped Barack

Clinton also struggled with the enthusiasm gap when she ran against Obama in the 2008 primary. Obama held huge rallies and captured much of the popular imagination and enthusiasm. Rendell said he did not think 2016 would pose the same problems because the "fear and loathing" of anti-Trump voters will drive turnout.

Democratic pollster Geoff Garin, a strategist for a super political action committee supporting Clinton's candidacy, acknowledged "there is a lot of emotion around Donald Trump's candidacy" but contended that cuts both ways.

Trump will be a "lightning rod for motivating Democratic voters to engage in the race and turn out in November in a way that counters whatever enthusiasm he creates on the other side," Garin said.

Whatever happens, Democratic consultant Joe Trippi said dealing with Sanders and his rallies may help Clinton.

"They may just have to get used to hearing everybody whine about 'but he'd got all these crowds,'" Trippi said. "Maybe this is good practice, the primary. There's no evidence that any of this matters."
___
Associated Press writer Jill Colvin in Washington contributed to this report.