States Dig in Against Directive on Transgender Bathroom Use 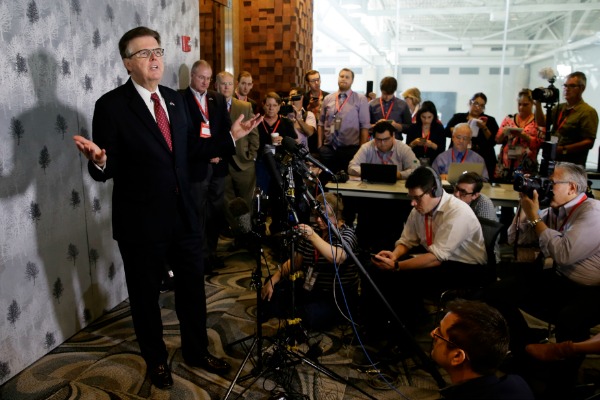 RALEIGH, N.C. (AP) — Politicians in Texas, Arkansas and elsewhere vowed defiance — and other conservative states could follow suit — after the Obama administration told public schools across the U.S. on Friday to let transgender students use the bathrooms and locker rooms that match their gender identity.

The federal government's guidance was met with tearful praise from parents of transgender students.

"It's heartbreaking that these kids are losing their lives because they can't be accepted," Hope Tyler, who has a transgender son at a Raleigh high school, said in reference to suicides among transgender people. "Somebody has to speak for the kids."

The directive from the U.S. Justice and Education Departments was sent to schools across the country and represents an escalation in the fast-moving dispute over what is becoming the civil rights issue of the day.

It came just days after the Justice Department and North Carolina sued each other a state law requiring transgender people to use the public bathroom that corresponds to the sex on their birth certificate. The law applies to schools and many other places.

While supporters say the law is needed to protect women and children from sexual predators, the Justice Department and others argue that the threat is practically nonexistent and the law discriminatory.

The guidance issued on Friday is not legally binding, since the question of whether federal civil rights law protects transgender people has not been definitively answered by the courts and may ultimately be decided by the Supreme Court.

But schools that refuse to comply could be hit with civil rights lawsuits from the government, and the Obama administration could also try to cut off federal aid to schools to force compliance.

Texas' lieutenant governor said the state is prepared to forfeit billions rather than let the Obama administration dictate restroom policy for its 5.2 million students.

"We will not be blackmailed by the president's 30 pieces of silver," Republican Lt. Gov. Dan Patrick said.

Similarly, GOP Gov. Asa Hutchinson of Arkansas said schools should disregard the directive, which he derided as "social engineering."

Rodney Cavness, superintendent of the Port Neches-Groves school district in Texas, told KFDM-TV: "When I get that letter, I'll throw it away."

Governors and top leaders in several other conservative states issued sharply worded statements against the guidance but stopped short of telling schools to ignore it.

"The last time I checked, the United States is not ruled by a king who can bypass Congress and the courts and force school-age boys and girls to share the same bathrooms and locker rooms," North Carolina's Republican Senate leader Phil Berger said.

Already, officials from eight states — West Virginia, Arizona, Kansas, Nebraska, Texas, Utah, Maine and North Carolina — signed on to a brief in recent days asking a federal appeals court to re-hear a case in which it sided with a Virginia transgender student seeking to use the boys' bathroom.

The new guidance says public schools must treat transgender students in a way that matches their gender identity, even if their education records indicate a different sex.

Asked about the Texas lieutenant governor's comment, White House press secretary Josh Earnest said: "This does underscore the risk of electing a right-wing radio host to a statewide elected office."

Some school systems around the country already accommodate transgender students when it comes to bathroom use.

Nearly half the schools in the 53,000-student Seattle district have gender-neutral restrooms, and students can also use the bathrooms in the nurses' office, spokeswoman Stacy Howard said.

The National School Boards Association has published guidelines for its members in dealing with transgender students. It stops short of telling them exactly what to do, instead advising them to work with their attorneys to determine the best course amid a "shifting legal landscape."

Francisco Negron, chief attorney for the organization, said there is a "disconnect" between what is happening in various states and what the federal government is demanding, "and school districts are caught in the middle."

Tyler, whose 15-year-old transgender son attends the Raleigh high school, said she cried when she heard about the Obama administration directive.

"It means a lot to our kid. People don't realize that these kids in schools weren't having any bathroom issues before," she said.

Since the passage of North Carolina's bathroom law, Tyler's son has been doing his schoolwork under a special arrangement that allows him to take classes mostly from home.

Before the new law, Hunter Schafer, 17, had no problems being accepted by her peers at the North Carolina School of the Arts, a residential high school in Winston-Salem where she has lived in the girls' dormitory.

With the passage of the law, Schafer said she found herself "just having to decide to I break the law or do I put myself in this highly uncomfortable or highly dangerous situation in the men's restroom."

Eventually, the school gave her access to a single-user restroom.

Her father, Mac Schafer of Raleigh, was elated to hear the new guidance from the Obama administration.

"As a parent, some of your core instincts are protection for your child," he said. "To know that the federal government is pushing for respect and safe space and rights for Hunter is thrilling."