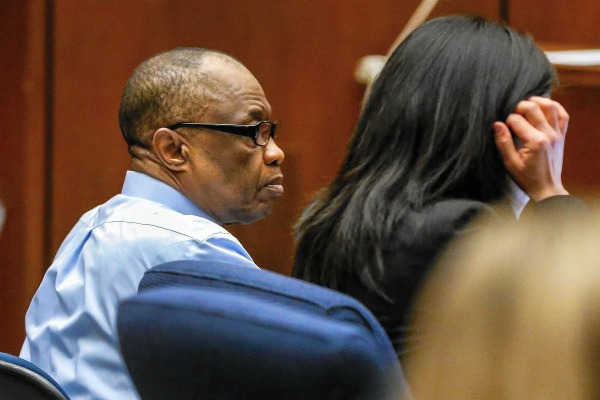 LOS ANGELES (AP) — The "Grim Sleeper" trial was nearly over Monday after months of testimony about a serial killer targeting black women during the 1980s crack cocaine epidemic on the south side of Los Angeles.

Lonnie Franklin Jr., 63, faces the death penalty if convicted of killing nine women and a 15-year-old girl between 1985 and 2007. All were shot or strangled, and their bodies were dumped in alleys and trash bins.

Perhaps the most riveting witness against Franklin is the only woman known to have survived the serial killings. She described being shot in the chest and sexually assaulted in 1988. Then, she noticed her attacker taking a Polaroid picture of her before pushing her out of his car.

When Franklin was finally arrested 22 years later, the same photograph — showing the wounded woman slouched over in a car — was one of many pictures found in his possession, prosecutors said.

Franklin was connected to all ten victims named in this trial through either ballistics or DNA evidence, prosecutors said.

Many of the victims were prostitutes; others used cocaine. Franklin targeted women who were "willing to sell their bodies and their souls in order to gratify their dependency on this powerful drug," prosecutor Beth Silverman told jurors.

Before his arrest, a police officer posed as a pizza parlor busboy to collect DNA samples from dishes and utensils Franklin used at a birthday party.

Franklin's defense questioned the DNA evidence. Attorney Seymour Amster told jurors that many victims had DNA from more than one man on their bodies, and that more than 20 DNA tests excluded his client.

Both Silverman and Amster acknowledged disliking each other, and at times held heated arguments in the courtroom out of the jury's hearing.

At one point, Amster even yelled at Superior Court Judge Kathleen Kennedy after she ruled that he would have to refile a subpoena.

"I am now going to rest. We have no defense," Amster declared, prompting gasps in the courtroom. "I cannot represent this man any further." However, he continued on with the case.

Authorities dubbed him the "Grim Sleeper" because the killings attributed to him stopped from 1988 to 2002. Dozens of police officers had failed to solve the case in the 1980s, and the renewed killings prompted the creation of a special task force. Franklin was finally arrested in 2010.

The closing arguments began with prosecutors after the judge delivered jury instructions on Monday. The process could last two days.