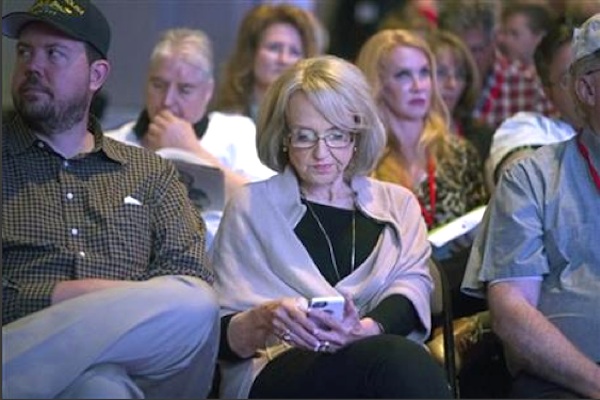 The Cruz slate won virtually all of the 28 at-large national delegates and roughly split the 27 delegates selected by congressional district.

Former Gov. Jan Brewer, losing her first election in 35 years, angrily yelled "I got cheated — I got cheated," as the results became known.

But Cruz's Arizona campaign organizer says simple math led to the at-large victory. Cruz offered a nearly identical slate of candidates as John Kasich backers, and the combined votes led to a win.

The victory was mainly strategic for Cruz since all 58 Arizona delegates are required to vote for Trump on the first national ballot because he won the state's primary. There are three automatic delegates, including state party Chairman Robert Graham.

With Trump at nearly 1,000 national delegates out of 1,237 he needs to win the presidential nomination outright after recent sweeps of five eastern states, even Cruz's Arizona backers believe Saturday's effort is likely to be for naught.

"It's most likely that Trump will be the next president, but I'm trying my hardest for it to be Cruz," said state Rep. David Livingston, who is unabashedly backing Cruz.

State Treasurer Jeff DeWit, who chairs Trump's Arizona campaign, said a challenge is possible after calls for a revote were rejected by the party.

"The Trump campaign is very unhappy with the results," DeWit told reporters. "We don't feel that this was a fair process. The Trump button got checked more than any other, so why do we have so few delegates?"

Constantin Querard, Cruz's Arizona campaign chair, countered: "They lost because of math, not because of malfeasance. If you take the people that want Cruz, and you add to them the people who don't want Trump, that's a majority in just about any room in America."

Graham, the state party chairman, said the election was run fairly, and the Kasich-Cruz slates just combined to get the win.

"Mr. DeWit is making a habit of making outlandish comments to try to crush the integrity of a great meeting," Graham said. "This was a very pronounced victory for the Cruz-Kasich slates. If it was close, then you might say 'Hey, one person here, one person there,' but this was a commanding victory."

The battle at Saturday's convention goes back weeks, when Cruz backers were wrangling at local party meetings to nail down delegates to the state party.

Gov. Doug Ducey opened the convention by calling on the party faithful to end Democratic control of the White House.

Ducey called the past eight years "the most futile in modern American history" and said that it's time to "put a Republican in the White House and Hillary Clinton in the Big House."