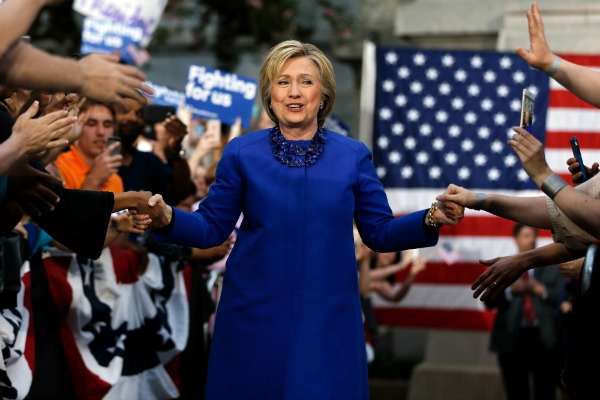 PHILADELPHIA (AP) — Looking to stretch their leads, Republican Donald Trump and Democrat Hillary Clinton aimed for a sweep of all five Northeastern states holding primaries Tuesday. Their rivals vowed to fight on regardless, even with their paths to nomination increasingly narrow.

For Clinton, wins in most of the states holding contests — Connecticut, Delaware, Maryland, Pennsylvania and Rhode Island — would leave little doubt that she'll be her party's nominee. She's already been looking past Vermont Sen. Bernie Sanders, barely mentioning him at campaign events except to push for party unity in a general election.

During a town hall Monday with MSNBC, Clinton said that when she lost the 2008 Democratic primary to Barack Obama, "I did not put down conditions" for supporting him.

"I hope that we will see the same this year," she said.

Sanders said on ABC's "Good Morning America" that his campaign was "handicapped" Tuesday because the states in play don't allow independents to participate. Still, he insisted he would stay in the race through the final contest in California and "then we'll see what happens."

Sanders' senior adviser, Tad Devine, said recently that the campaign would have to reassess things if the day went badly. But Sanders' wife, Jane, said Tuesday on MSNBC: "No, no, no. ... We're not talking about reassessing."

Devine said Tuesday, "We'll wait and see what the numbers are. Once we do we'll decide what we're going to do going forward. But Bernie is going to be in this race through the District of Columbia." That's the end of the primary season.

Senate Democratic leader Harry Reid said Sanders should do as he thinks best. But when Reid was asked if he thought his Senate colleague still had a path to nomination, he said, "No, I do not."

Democrats are competing for 384 delegates in Tuesday's contests, while Republicans have 172 up for grabs.

While Trump holds a substantial lead in the Republican delegate count, the GOP contest continues to be chaotic. The businessman is the only one left in the GOP race who can reach the 1,237 delegates needed to clinch the nomination before the July national convention, but he could very well fall short, pushing the nominating fight to the party's July gathering in Cleveland.

Of the five states voting Tuesday, Trump can afford to lose only one and still retain a chance to reach his goal.

Pennsylvania Republican voter Laura Seyler cast her vote for Trump, saying she believes he will "take the bat and straighten things out."

"I don't think he's afraid, he doesn't owe anybody anything, and I think he's very much an American that loves his country, and he sees Americans suffering," she said.

Texas Sen. Ted Cruz and Ohio Gov. John Kasich are now joining forces to try to stop him. Their loose alliance marks a stunning shift in particular for Cruz, who has called on Kasich to drop out of the race and has confidently touted the strength of his own convention strategy.

Kasich has won just a single primary — his home state — but hopes to convince convention delegates that he's the only Republican capable of defeating Clinton.

Under their new arrangement, Kasich won't compete for votes in Indiana, allowing Cruz to take Trump on head to head in the state's May 3 primary. Cruz will do the same for Kasich in Oregon and New Mexico.

"The fact is, I don't have unlimited resources," Kasich said Tuesday on NBC's "Today," downplaying the collaboration as merely a logical step if he is to win the nomination in a contested convention.

Cruz was spending Tuesday night in Indiana, having already moved beyond on.

Trump panned his rivals' strategy as "pathetic" and another example of what he's called a rigged political system.

Cruz and Kasich's public acknowledgement of their coordination underscores the limited options they now have. The effectiveness of the strategy was quickly called into question after Kasich said that while he won't spend resources in Indiana, his supporters in the state should still vote for him.

Trump's path to nomination before the national convention remains difficult, requiring him to win 58 percent of the remaining delegates to reach the magic number by the end of the primaries. He's hoping for a solid victory in Pennsylvania, though the state's unique ballot could make it hard for any candidate to win a big majority.

While the statewide Republican winner gets 17 delegates, the other 54 are directly elected by voters and can support any candidate at a convention. Their names are listed on the ballot with no information about which White House hopeful they support.

Clinton is on solid footing in the Democratic race and entered Tuesday's contests having accumulated 82 percent of the delegates needed to win her party's nomination. While she can't win enough delegates to officially knock Sanders out of the race this week, she can erase any lingering doubts about her standing.

Including superdelegates, Clinton now leads Sanders 1,946 to 1,192, according to a count by the AP.