US to States: Make it Easier for Ex-Prisoners to Obtain IDs 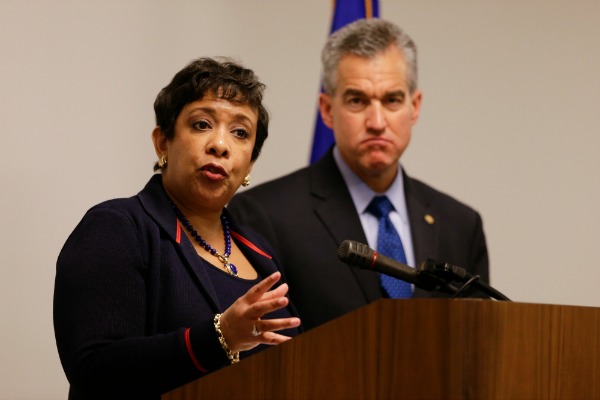 WASHINGTON (AP) — States should make it easier for convicted felons to obtain state-issued identification after they get out of prison, Attorney General Loretta Lynch said Monday in announcing a set of measures aimed at helping smooth the return to society for the hundreds of thousands of inmates released each year.

The announcement is part of a broader movement to undo criminal justice policies that have meted out exceptionally long sentences for drug offenders, caused prison populations to balloon and, advocates say, created unnecessary barriers for ex-convicts looking to rebuild their lives. It amplifies an ongoing Justice Department push to rethink harsh drug sentences and to ensure alternatives to prison for certain nonviolent defendants, an effort known as "Smart on Crime."

"The long-term impact of a criminal record prevents many people from obtaining employment, housing, higher education and credit — and these barriers affect returning individuals even if they have turned their lives around and are unlikely to reoffend," the department said in a seven-page policy statement titled "Roadmap to Re-entry."

Lynch made the announcement in Philadelphia on Monday at the start of National Re-entry Week.

The issue of felons' rights has attracted growing attention at the state and federal levels in recent years. Last week, Virginia Gov. Terry McAuliffe issued an executive order that would allow more than 200,000 convicted felons to cast ballots in November, calling voting rights the "essence of our democracy."

Each state sets its own eligibility requirements for voting. Nearly 6 million Americans are unable to vote because of their criminal backgrounds, though more than 20 states have acted in the last two decades to help people with criminal convictions vote, according to the Brennan Center for Justice.

A letter released Monday by the Justice Department calls on governors to allow federal inmates who are returning to their communities to exchange their prisoner identification cards for state-issued identification, or to simply accept their prison cards as a primary identity document. Without identity documents, Americans leaving prison face challenges in getting jobs, housing or opening bank accounts, Lynch wrote in the letter.

The practical impact is to standardize varied state laws about identification.

"But even more important is the message that such a program would send to returning citizens: That they are welcome back into society; that their government is invested in their success; and that they can now — quite literally — exchange their old identity as a federal inmate for a fresh start," Lynch said in Philadelphia, where she was joined by Housing and Urban Development Secretary Julian Castro.

Separately, Lynch announced a series of actions taken by the federal Bureau of Prisons, which houses nearly 200,000 prisoners, to help convicts better acclimate to society. Roughly 600,000 state and federal prisoners return to their communities each year, the Justice Department said.

The Justice Department initiative directs federal prisons to prepare an individualized re-entry plan for each inmate that will take into account substance abuse, criminal history and education level.

In addition, the agency will be reviewing its network of halfway houses, where some 80 percent of federal prisoners who return to U.S. communities live before being fully released, and assessing life skills, education and job training programs to ensure that they're best serving inmates' needs. A pilot program is also being launched at four bureau facilities for children of incarcerated parents as a way to keep families united.

The Justice Department is publishing a manual to provide advice and guidance on re-entry to all U.S. citizens leaving federal correctional facilities.