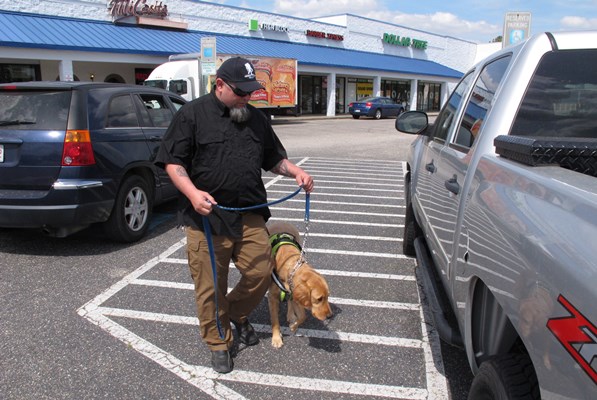 "He's basically looking for ... anything that would be out of the ordinary. A bag. A particular weapon. People acting erratic," says Aguirre, who suffers from post-traumatic stress disorder after three tours of duty in Iraq and one in Afghanistan. At the cash register, Aguirre says "Block," and the dog places himself perpendicular to his master, creating a buffer to anyone who might approach.

Before Munger, a simple outing like this would have been terrifying if not impossible. "He's put faith back into my way of looking at society," Aguirre says.

But do the comfort and security this lovable dog provides come at the expense of true healing from PTSD? Is Munger merely preventing Aguirre from confronting his demons?

Since 2002, the U.S. Department of Veterans Affairs has paid veterinary bills to veterans with guide or service dogs for physical disabilities. Now, the agency is in the midst of a $12 million study to gauge the efficacy and costs of using dogs to help those who suffer from post-traumatic stress.

Four years in, that research has been plagued by problems. Only about 50 dogs have been placed with veterans, and critics question whether the protocol itself is flawed — with the dogs being trained to do things that could reinforce fears. Others worry the animals could become a substitute for the hard work that comes with therapy.

"You will have the veterans go to more places with the dogs and do more things than they would otherwise do. But they are reliant on the dog, not on their knowledge of ... whether really they are afraid of a ghost," said Dr. Edna Foa, director of the Center for Treatment and Study of Anxiety at the University of Pennsylvania Perelman School of Medicine.

More than 350,000 veterans of the Iraq and Afghanistan wars have sought help from the VA for PTSD. Yet the agency is authorized to pay only for "evidence-based" therapies such as cognitive processing and prolonged exposure, which involve having veterans confront and analyze traumatic events.

In 2010, Congress permitted the VA to study alternative treatments for PTSD, including the therapeutic use of animals. The study began in late 2011 in Tampa, Florida, with three nonprofits contracted to provide up to 200 service dogs for veterans, who would be compared against a control group that did not receive dogs.

The effort soon ran into trouble. The VA cut off two of the three dog vendors following biting incidents involving participants' children. The final contract was terminated in August 2012 amid allegations of lax veterinary care and placement of dogs "with known aggressive behavior," according to VA records. By then, only 17 dogs had been placed.

During the next year and a half, the study protocol was revamped to exclude veterans with children under age 10. It also dropped the no-dog control in favor of a group that would receive less-specialized "emotional support dogs" whose "sole function is to provide comfort."

Critics of the study object most strongly to the tasks the VA is requiring of the dogs — sweeping the perimeter of a room before a veteran enters, for example, or protecting the veteran by "blocking."

"Isn't that saying that al-Qaida could be behind the shower curtain? That's supporting paranoid, pathological thinking," said Meg Daley Olmert, author of a book on how contact with a dog can create a sense of well-being.

Olmert is chief research adviser for Warrior Canine Connection, a Maryland-based nonprofit that uses veterans to train service dogs for their fellows. The group's leaders say dogs should be trained to pick up on cues from PTSD sufferers and then provide the appropriate support, such as learning to wake someone up during a nightmare or detecting when a veteran is anxious, and interacting in a way that helps calm him.

Rick Yount, executive director of the nonprofit, questioned whether the study had perhaps even been set up to fail so that the VA wouldn't have to pick up the tab for veterinary bills for psychiatric service dogs. Already the VA is on the hook for upward of $1.4 million a year to cover bills for service dogs for physical disabilities.

Michael Fallon, the VA's chief veterinary medical officer, said the insinuation that money is the researchers' chief concern is "ludicrous." As for the training guidelines, he said the list of commands was developed during more than a year of consultation with mental-health experts, service dog providers and veterans. They help get veterans "out into the community and integrated more into the public life," he said.

One dog trainer agreed, in part. David Cantara heads North Carolina-based Patriot Rovers, which trained Aguirre's dog and is not connected to the VA's study. While Cantara is opposed to using dogs to sweep rooms, he said the blocking command is one of the most vital to his veterans.

"They startle very quickly. And knowing that they have that dog there, guarding their six as it were ... they're not in this constant hyper vigilant state," he said.

The debate has highlighted an overall lack of standards in the service dog industry. Currently, the VA will only pay benefits for service dogs trained by an organization accredited by Assistance Dogs International, and that group is only now developing its own guidelines for the use of dogs for veterans with combat-related PTSD. Only one of the vendors supplying dogs for the VA study is ADI-accredited, and none has prior experience training animals for veterans with PTSD.

Sheila O'Brien, chair of the steering committee drafting ADI's guidelines, said the group is studying other tasks in lieu of blocking and sweeping.

Despite all the criticism, the VA's study, set to conclude in 2018, is chugging along — with more than 100 of an eventual 220 veterans enrolled, about half paired with dogs. Fallon said the only recent glitch was a vendor error that shipped out service dog vests for some support dogs, which don't have the same public access rights under the Americans with Disabilities Act.

In November, the Kaiser Permanente Northwest Center for Health Research released the results of a study involving 78 veterans with PTSD. It found that those with animals had better overall mental health, less substance abuse and higher ratings on their interpersonal relationships. Researchers said, however, that "differences cannot be directly attributed to service dogs" and that more study is needed.

U.S. Rep. Ron DeSantis recently introduced a bill that would take $10 million from the VA's budget to immediately begin pairing service dogs with post-9/11 veterans for whom traditional PTSD treatments hadn't worked. During a subcommittee hearing last week, Rory Diamond, executive director of the group K9s for Warriors, said the VA had "fumbled" its study, and that veterans can't afford to wait.

As far as Joe Aguirre is concerned, the question of whether these dogs help has been answered.

"I honestly feel without Munger in my life right now, I probably wouldn't be alive," he said of the dog named in honor of Spc. Joshua Munger of Maysville, Missouri, killed by an improvised explosive device near Baghdad in 2005. Patriot Rovers names all its support dogs after fallen service members. "It makes me feel like I've got a bond, knowing that he, like any other soldier that you have a bond with, would take a bullet for you. Would watch your back — and your front."

Whatever the potential costs of providing these animals, Aguirre added, it's "nickels and dimes compared to the service we provided to our country."

Allen G. Breed is a national writer, based in Raleigh, North Carolina. He can be reached at features@ap.org. Follow him on Twitter at https://twitter.com/AllenGBreed .