No Prison Time for NYPD Officer in Stairwell Shooting Case 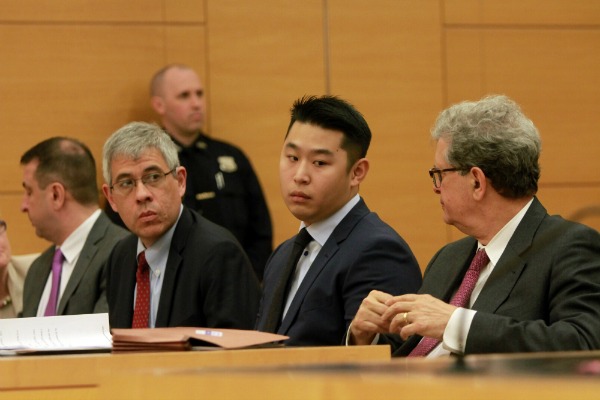 NEW YORK (AP) — A former police officer who shot an unarmed man to death in a darkened stairwell was spared prison time Tuesday, and a judge reduced his manslaughter conviction to a lesser charge in a case that became a flashpoint for police accountability.

Peter Liang was sentenced to five years' probation and 800 hours of community service in the 2014 shooting of Akai Gurley, who was walking down a public housing stairway when Liang, a rookie officer, fired a bullet into the dark — by accident after being startled, he said. The bullet ricocheted and killed Gurley, 28.

Speaking softly, Liang told the court he never meant to fire and apologized to Gurley's family.

"My life is forever changed," he added. "I hope you give me a chance to rebuild it."

Liang, 28, is the first New York City police officer convicted in an on-duty shooting in 11 years. A jury found him guilty this winter of a manslaughter charge carrying up to 15 years in prison.

And, the judge said, "given the defendant's background and how remorseful he is, it would not be necessary to incarcerate the defendant to have a just sentence in this case."

Brooklyn District Attorney Kenneth Thompson had recommended against prison for Liang, but the prosecutor said Tuesday he would appeal the judge's decision to reduce the conviction. Defense lawyer Paul Shechtman said Liang would also appeal his remaining conviction, though the day's developments marked "a very good chapter" for him.

The shooting happened in a year of debate nationwide about police killings of unarmed black men, and activists have looked to Liang's prosecution as a counterweight to cases in which grand juries have declined to indict officers, including those who killed Michael Brown in Missouri and Eric Garner in New York. Like Brown and Garner, Gurley was black. Liang is Chinese-American.

Gurley's family said Liang had been let off lightly.

"There's no justice. Akai Gurley's life does not matter. Black lives do not matter," said an aunt, Hertensia Petersen.

Sherrilyn Ifill, president of the NAACP Legal Defense and Educational Fund, called Liang's sentence "a deeply troubling message that police officers convicted of killing unarmed African-Americans will be held to a different, and more lenient, standard of justice" than others.

Meanwhile, Liang's supporters say he has been made a scapegoat for past injustices. More than 10,000 of his backers rallied in New York and across the U.S. after the verdict, protesting his conviction.

Dozens of demonstrators representing both sides gathered Tuesday on opposite sides of the street outside the courthouse, separated by police barricades.

On the Gurley side, demonstrator Daniel Sanchez said the no-prison sentence shows "the justice system doesn't work for all communities."

Inside, both prosecutors and Liang's lawyers cautioned against using the case to make a larger point about police conduct.

"This simply is not a case of police brutality. This case features a reckless shooting by a rookie police officer in a darkened stairwell," Brooklyn Assistant District Attorney Joe Alexis said.

But Gurley's loved ones reminded the judge of the toll.

"Because of the recklessness of that night, I'm without my partner, our daughter is without her father, a mom is without her son," said Gurley's domestic partner, Kim Ballinger.

Gurley's girlfriend, Melissa Butler, who was with him when he died, told Liang: "When you stole Akai's life, you stole mine as well."

Liang's missteps after the shooting were detailed during the trial, including his failure to aid the bleeding Gurley as Butler frantically performed CPR. Liang and his partner, who wasn't charged and testified during the trial, said they didn't help and faulted their police training. Their admissions prompted Police Commissioner William Bratton to launch an investigation into training.

Liang and his partner were fired after the verdict.